Cristiano Ronaldo: The Relentless Athlete Who Conquered Europe With Real Madrid and Portugal

Cristiano Ronaldo is a force of nature. The single-minded drive he has to improve season upon season is quite frightening once you get past how impressive it is.

At Manchester United he was part of Sir Alex Ferguson's greatest Premier League team, then his goals propelled Real Madrid to the elusive La Decima before he captained Portugal to their first ever trophy at international level.

Ronaldo has proven himself to be one of the games greatest (15th greatest to be precise) so many times, in so many different settings, his place in the pantheon of footballing legends is well deserved. 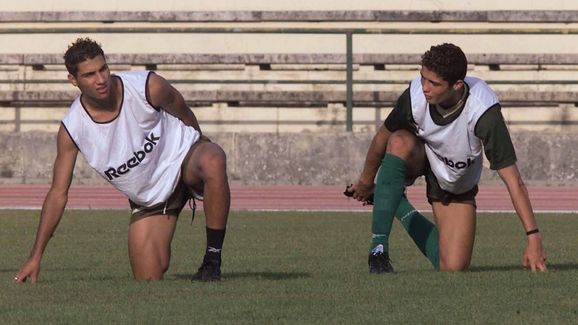 Having left his family in Madeira to join Sporting CP's academy on the mainland at the age of 14, Ronaldo struggled to adapt to life away from home. After two tear-soaked years, the eager youngster got his break when a gap in László Bölöni's schedule saw the first team coach cast an eye over the youth side.

The 16-year-old impressed with his confidence among the senior players and a year later, in 2002, he made the first of 25 Portuguese top flight appearances, going on to score three goals as an out-and-out winger that season.

Perhaps no preseason friendly has, or ever will have, more significance for ​​Manchester United than the one they played against Sporting in August 2003. That humid summer day saw an 18-year-old Ronaldo repeatedly and mercilessly tear apart United's backline. With his startling performance made all the more impressive due to the terrible quality of the pitch, which had only been laid a few weeks before.

As the story goes, United's players pleaded with Ferguson to sign Ronaldo and, putting aside whether or not Rio Ferdinand can rightfully lay claim to this transfer, the man who had tormented their defence would arrive in the locker room a week later. 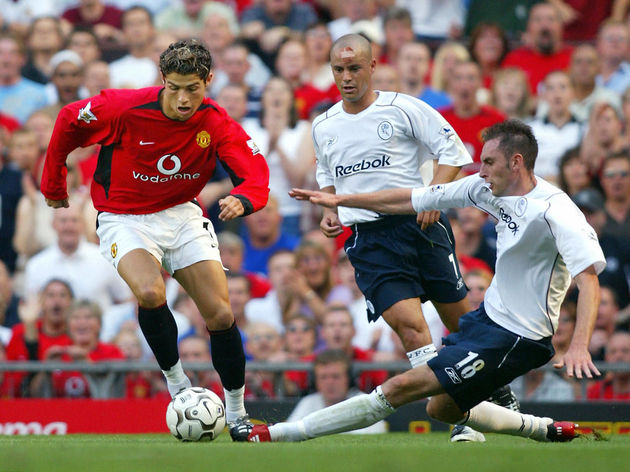 Although he was sensational on a memorable debut against Bolton, ​Ronaldo struggled in his first few seasons, with his penchant for numerous step-overs attracting derision from the crowd and brutal tackles from opposition.

Yet, the teenager soon grew accustomed to the physicality, in part due to the rough treatment his own teammates greeted him with in training.

By 2006, United had gone three years without a league title (considered an almighty drought by that point under Ferguson) yet that summer, their star striker Ruud van Nistelrooy, who often complained about Ronaldo's antics on the wing, would leave Old Trafford.

In the Dutchman's absence, Ronaldo scored 17 goals to propel United to the first of a hat-trick of titles. But the following campaign would prove his greatest on English shores.

31 goals in 31 Premier League starts saw Ronaldo equal the all-time record number of goals in a single season in the competition before scoring a stunning header in the Champions League final to set United on the way to their third-ever top tier European trophy. 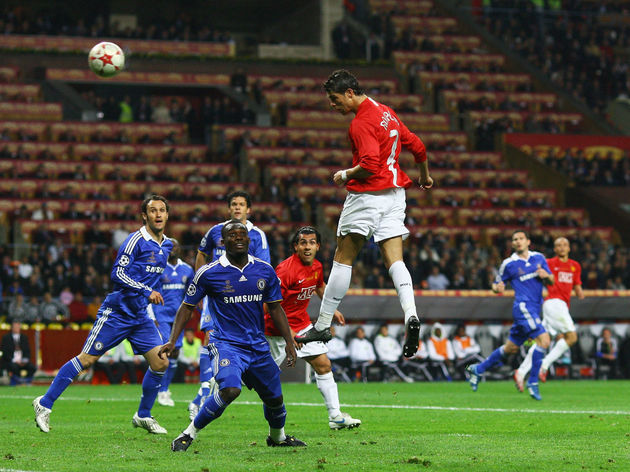 Ronaldo would also fulfil his long-held ambition of winning the Ballon d'Or that year and at 23, it looked as if he had already hit his peak.

How wrong that would prove to be.

In the summer of 2009, after his third ​Premier League title, Real Madrid parted ways with £80m, a world-record fee at the time, for Ronaldo's signature.

It would be in the Spanish capital where Ronaldo fully morphed into the ruthless, selfish, goal scorer we know today.

Seven goals in his first five games for Madrid made sure he dismissed any talk of the club overpaying for his services,

In 2010/11, following the arrival of José Mourinho, Ronaldo's goals kept flowing with 53 strikes in 54 games (prepare for more eye-watering numbers to follow). But his most important effort in a white shirt - by that point anyways - came in the Copa del Rey final, with his towering header the only goal of the game to prevent Pep Guardiola's Barcelona from achieving yet another treble. 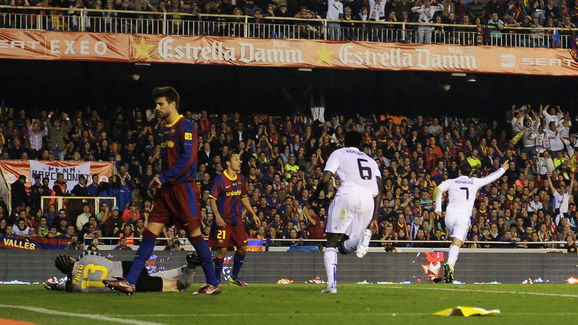 The next campaign would see Ronaldo claim his first La Liga title as he scored a frankly ridiculous 46 league goals (just league goals).

After a trophy-less 2012/13, in which he scored just the 48 goals in 48 games, Carlo Ancelotti joined the following year and steered Madrid, thanks in no small part to the Ballon d'Or winning Ronaldo, to their long-awaited tenth European Cup: La Decima.

On route to that historic victory, Ronaldo netted 17 goals in the ​Champions League alone, a figure which has never been matched in the history of the competition, dating back to 1955 (Ronaldo also holds the second- and third-best tallies).

Another Ballon d'Or followed and after Rafa Benítez was replaced by Zinedine Zidane (not before the Spaniard could try and teach Ronaldo how to take free-kicks) Ronaldo and Madrid claimed the Champions League trophy again as the Portuguese star netted the decisive spot-kick in the penalty shootout against city rivals Atlético.

However, after numerous frustrations with the Portugal national team, the summer of 2016 would prove the greatest in the country's footballing history, as Ronaldo captained the side to European Championships glory. Ronaldo's final on the pitch would end with an early knee injury, but after limping off in tears, the No. 7 returned to pace, in agony, beside head coach Fernando Santos on the touchline, barking instructions as he desperately tried to help his side.

After recovering from the knock which had brought his final to a premature end, Ronaldo won La Liga, the Champions League and his fifth Ballon d'Or. The final in Cardiff would prove to be Ronaldo's most impressive to date, with his two goals helping Madrid prevail 4-1 against Juventus.

After yet another European crown in his final season in Madrid (his fifth overall), Ronaldo joined Juventus for £105m at the age of 33. The fact that he cost £25m more than Los Blancos had paid nine years prior goes to show his consistency and the shape he kept himself in.

With more than 1000 games played, more than 700 goals scored, league titles in England, Spain and Italy, Cristiano Ronaldo was and is simply a phenomenon and given the dedication he has, it seems as though he's on his way to adding further chapters to his remarkable story.