Ronaldinho: The Magician Who Brought Glory & Style Back to Barcelona

​Very, very occasionally, a footballer comes along who is so good that there is no game plan in the world that can stop him from dictating the course of the next 90 minutes of play.

Fortunately for us football fanatics, we have been spoiled by the mind-boggling achievements and insane longevity of Cristiano Ronaldo and Lionel Messi over the past 15 years. But unfortunately, we've also become desensitised to the talent of those who went before them.

And it can be easily forgotten that Messi's rapid rise from La Masia product to the world's greatest footballer coincided with the peak years of one of the game's most enjoyable entertainers. Ronaldinho was arguably the most gifted star of his generation, and between the years of 2004 and 2006 the magician sat at the top of the footballing tree. He

The silky samba skills, the never-seen-before tricks and party pieces, the ease at which he could humiliate the world's greatest defenders. The man was born for the big stage. Of course, as his lengthy list of achievements will ratify, Ronaldinho was a winner, and as with any footballer, he possessed the competitive streak needed to play at the highest level.

But there was always the feeling that entertainment came first. The desire to put smiles on faces and lift bums off seats was what got Ronaldinho out of bed in the morning, and he always played the game with that infectious and authentic smile.

The superstar could play as a winger or an attacking midfielder, but it was out wide where he was at his most dangerous. Picking the ball up on the left flank, near the halfway line, Ronaldinho was in his element.

His ability to run at full pace with the ball at his feet and still maintain inch-perfect control was incomparable, and this unstoppable trait left little need for extravagant flicks or tricks to beat his marker.

But he did it anyway. 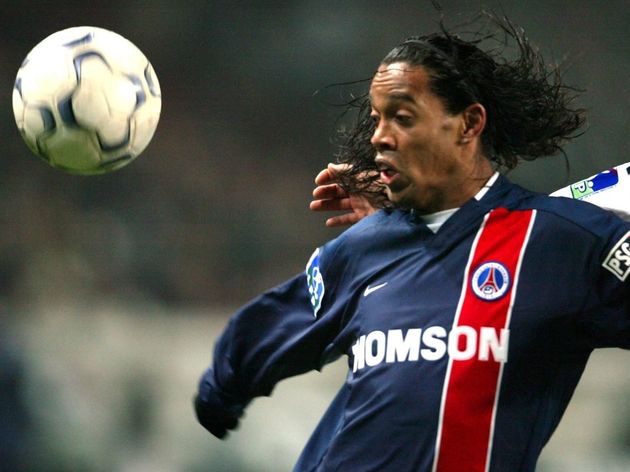 Ronaldinho had been tearing up Ligue 1 with Paris Saint-Germain following his first move to Europe, and there was an air of expectancy that he would soon land at the feet of football's giants.

And so it proved, as Barcelona pipped Manchester United to the signature of the €30m star in 2003. And it was a moment that would change the course of the club's history forever. The Barcelona of the mid-2000s was not the same team it is today. They hadn't won a Liga title since 1999, and we'd have to go back to 1992 for their last Champions League success - so there was a growing impatience and a frustration lingering in the air.

It didn't take him long to settle in, either. Ronaldinho announced himself in typical style, giving the Camp Nou faithful a taste of things to come with his first goal for the club against Sevilla. Collecting the ball in his own half, the winger dipped inside two challenges before unleashing a vicious 30-yard strike, which smacked the underside of the crossbar and bounced in. Promising signs, then.

But it was the following season that he really came into his own.

The World Cup winner brought the sleeping giants back to life in the 2004/05 season by helping them lift the Spanish title, scoring nine goals and providing 15 assists along the way.

He also made his mark on English football against Chelsea in the Champions league that year, scoring one of the most famous goals of the decade. Ronaldinho was surrounded by a circle of ​Chelsea players on the edge of the box, and with the ball marooned under his feet, any danger had seemingly been nullified. 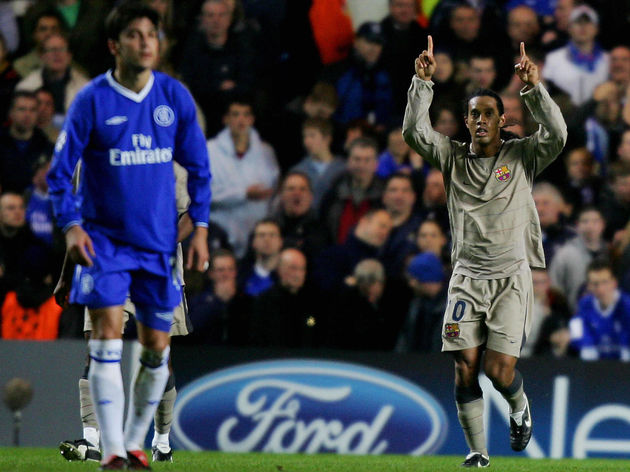 But the magician suddenly feigned a shot, wiggled his body almost hypnotically, and produced the most accurate toe-poke that has ever been seen. Time stood still. But then, as we were all simultaneously released from his spell, the ball arrowed into the bottom corner of the net. Magic.

And yet, the best was still yet to come.

In the 2005/06 season, our samba star hit unimaginable heights on the pitch. In November 2005, ​Real Madrid hosted Barcelona, and since the Blaugrana had pipped the Merengues to the title the year prior, the world was ready for a fiercely-contested spectacle.

But prepare all you want, if Ronaldinho decides you're not going to win, then tough luck, fellas.

The Barça star put in one of the greatest individual displays in history, catapulting the visitors to a stunning 3-0 win at the Bernabeu. Ronaldinho bagged a wonderful brace, tearing down the left-hand side with two mazy runs and destroying Sergio Ramos (twice) with his lightning speed and majestic movement.

And it was his second strike that sparked a reaction from the Madrid fans that only Diego Maradona had provoked in the past. Amid the presence of true unplayable talent, the Bernabeu stood as one. And applauded.

That says it all, really.

​Barça went on to claim their second successive league title, and ended their wait for Champions League glory, beating Arsenal in the final. And the rest, as they say, is history. 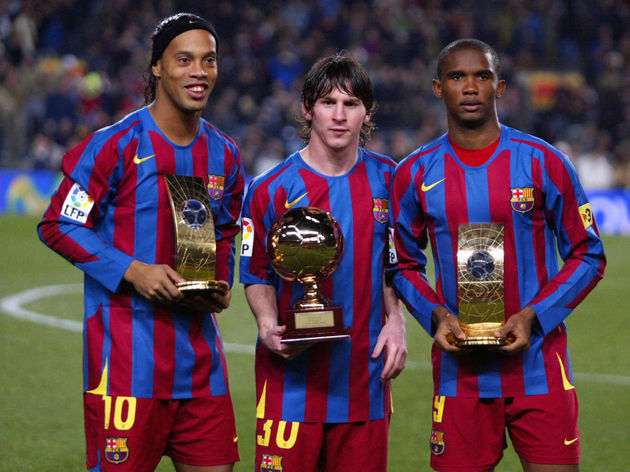 That year, Ronaldinho claimed the 2005 Ballon d'Or, as well the FIFPro and European Player of the Year awards. The undisputed heavyweight champion of the world. The grand slam of individual accolades.

When all is said and done, Ronaldinho was a showman. Perhaps it was his lack of commitment towards training and an unprofessional lifestyle that brought the curtain down prematurely on his time at Camp Nou - and maybe supporters are right to feel robbed of witnessing more of the great man at the very highest level.

But that's what made Ronaldinho so great. These personality traits may be perceived as character flaws by some, but in the end, they simply added to the aura that surrounded the magician.

Frankly, we should be grateful to have witnessed such freedom, artistic expression and happiness on a football pitch at all.