Playing in a division and for a country revered for churning out generational defensive talent seemingly year-on-year, Franco Baresi consistently stood out among the rest during his illustrious 20-year career

Baresi, the cornerstone of Arrigo Sacchi's unItalian revolution in Milan, epitomised the meaning of impenetrable, as he became the heartbeat to one of football's stoutest ever backlines in one of the most dominant club sides we've ever seen.

Oh, but how it could've all been so different if only Inter had decided to take a shot on Franco over his older brother, Giuseppe, when the former hadn't yet hit his teen years. Giuseppe Baresi enjoyed a stellar career for the Nerazzurri by the way, but as their careers progressed, the older brother was always known as 'the other Baresi'.

Deputising as a 17-year-old for the Rossoneri, it quickly became clear that Baresi wasn't merely just another talent to come out of one of the centre-back-making factories placed in every Italian city. This kid was a little different.

Piscinin (little one), as he swiftly became known by his Milan teammates, combined tremendous composure in possession, an underrated burst of speed along with an ingenious ability to anticipate every action on the pitch to became an outstanding libero...or sweeper if you're not feeling continental.

Following immediate success after his integration into the first-team, Baresi established himself as a superb leader and a calming influence on the pitch amid a bleak spell for the Rossoneri - which saw them relegated to Serie B in 1980 as a result of a match-fixing scandal, and struggle in the top-flight for much of the 1980s.

Baresi, a World Cup winner in 1982, remained loyal, however, and in 1987 when Milan appointed the rather unproven Sacchi, the Italian was rewarded for staying true to the club that took a shot on him as a youngster.

Napoli's Maradona and AC Milan's Baresi lead their teams out in the 1987-88 season pic.twitter.com/hG7hChgUAq

His never-ending defensive skill set allowed him to adapt to anything his manager asked of him, and under Sacchi, Baresi thrived in an aggressive system based around maintaining a high defensive line, attempting to catch opposing forwards out with their ridiculously organised 'offside trap'.

The persistent image of Baresi holding his arm up for the linesman became synonymous with Italian football during the Sacchi era at San Siro.

Sacchi's Milan were Galacticos before the term was invented, with Dutch trio Ruud Gullit, Frank Rijkaard and Marco van Basten spearheading the revolution. It was the back four of Mauro Tassotti, Baresi, Alessandro Costacurta and Paolo Maldini, however, who laid the foundations for Rossoneri supremacy.

Baresi and co. guided Milan to Scudetto success in Sacchi's maiden campaign after opponents breached Giovanni Galli's goal just 14 times all season. Victory in the Supercoppa Italiana followed in 1988 before it was time to assert European domination.

With captain Baresi timing tackles and carrying the ball out of defence like the graceful sucker he was, Milan swept aside a formidable Steaua Bucharest outfit 4-0 in the 1989 European Cup final. A year later, on the same stage, the diminutive Italian - patrolling the Milan backline with his iconic untucked shirt swagger - put in a career-defining display as his club won back-to-back European crowns following a 1-0 win over Benfica.

It was one of the finest displays ever by a defender in history.

Despite Sacchi's departure in 1991, the Rossoneri continued to dominate, with former player Fabio Capello at the helm - with his decision to stick with the methods put in place by Sacchi setting him up for success at San Siro.

A wealth of world class talent was added to what was already a special side led, of course, by Baresi.

Under Capello, Baresi would go on to win four more Serie A crowns and reach three consecutive European Cup finals between 1993 and 1995, with Milan's iconic 4-0 thrashing of Johan Cruyff's imperious Barcelona

Nevertheless, in four Champions League finals with Baresi at the heart of the Milan 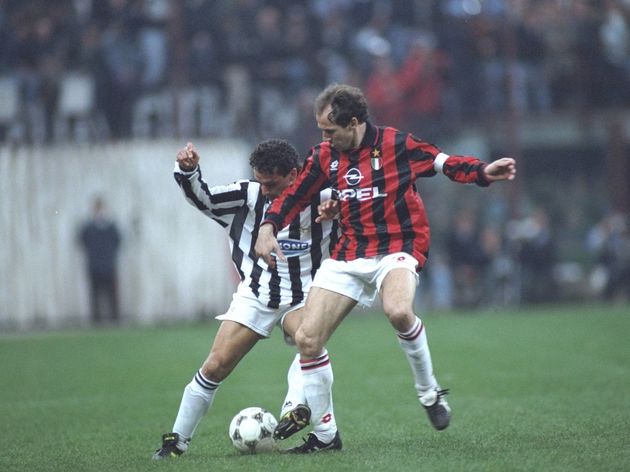 For some of the finest attacking talent Europe had to offer, trying to break down that Baresi-inspired backline was like fanatic gamers attempting to overcome the 'Lost Levels' on the original 'Super Mario Bros'. It was only the fortunate who could.

On the international stage, Baresi remarkably had to wait until Italia '90 to make his World Cup debut.

At the peak of his powers, Baresi proved instrumental to the host nation that summer as he guided the Azzurri to five consecutive clean sheets before their 1-0 semi-final defeat to Diego Maradona's Argentina.

Italy went one better in 1994, however, reaching the final despite their talismanic leader missing much of the tournament with a meniscus injury. In just 25 days, however, Baresi made a miraculous recovery in time for the final against Brazil and on football's grandest stage, piscinin