Xavi Hernandez: The Diminutive Midfielder at the Heart of Spain's Passing Revolution

“Some teams can’t or don’t pass the ball. What are you playing for?"

Between 2008 and 2012, Spain were the dominant force in international and domestic football. The national side ended 44 years of hurt in style by winning three major tournaments on the bounce, while Pep Guardiola's Barcelona side were tiki-taka-ering their way to trophy after trophy.

At the heart of both of these remarkable teams was a midfield double act like no other. Andres Iniesta and Xavi Hernandez were very much the Mel and Sue of Tiki-Taka. With a seemingly telepathic understanding, the pair were the integral ingredient to Barcelona and Spain's passing revolution that hoovered up every domestic and international honour in the space of just four years.

A product of Barcelona's famous La Masia youth system, Xavi broke into the first team as an 18-year-old in 1998. He retired in 2019 as Barcelona's all time record appearance holder, having played 700 times for the Catalan side, and the second most decorated Spanish player in history with 33 trophies, bettered only by Iniesta.

The midfielder made his international debut in 2000, but watched from the bench for the majority of the 2002 World Cup and 2004 European Championships, as Spain continued to underwhelm on the international stage.

But at Euro 2008, everything changed.

Spain won their first major honour since 1964, sweeping the rest of Europe aside with their slick brand of passing football. Xavi epitomised everything there was to love about this Spain team, with his astonishing intelligence, vision and passing range. Xavi shone as Guardiola masterminded a flawless first season in charge at Camp Nou. His side surged to the treble, and Xavi was the beating heart of Barcelona's passing machine.

Barcelona completed the treble against  Manchester United in the Champions League final. Xavi, the metronome in the middle of the park, put in an impeccable display, and capped it off by finding the head of Lionel Messi - little man to little man - with a pinpoint cross to make it 2-0. 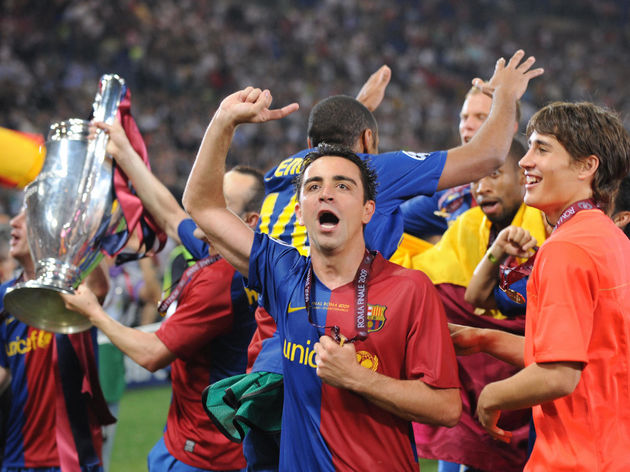 The following campaign, Barcelona once again marched to La Liga title, this time with a record points haul, and Xavi topped the division's assists charts for a second successive season.

That summer, Spain were crowned world champions for the first time in the country's history. T

There was no let up from Barcelona either. The Catalan club won their third consecutive La Liga title and reached the Champions League final. Again Manchester United were the opposition, and again Barcelona passed them to death, Xavi pulling the strings as they ran out 3-1 winners.

"It wasn't really Messi who was the problem. It was Iniesta and Xavi. They can keep the ball all night long."

Xavi and Spain's astounding dominance concluded at the 2012 European Championships. Xavi sent passing records tumbling in the group stages, before providing two assists in the final as Spain became the first nation in history to win three consecutive major tournaments.

Both of these Barcelona and Spain teams were stuffed full of world class talent. But Xavi made them play. 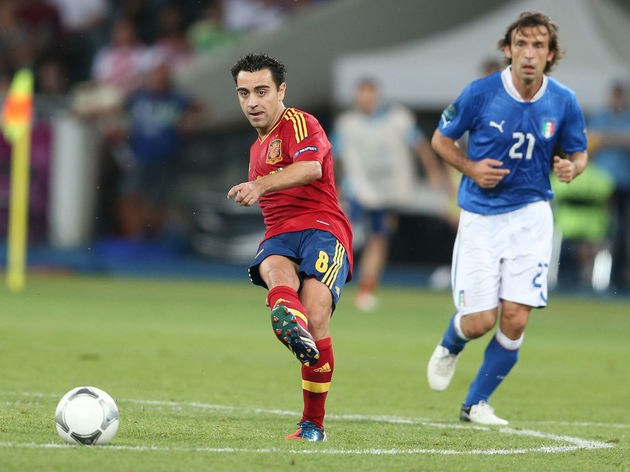 "While we live in the present, Xavi lives in the future."

Xavi sees football the way Ronnie O'Sullivan surveys a snooker table. He thinks five steps ahead and sees the angles and the runs and the tiny details that no one else does, while simultaneously making it look so simple. Yes, I have compared Xavi to both Ronnie O'Sullivan and Sue Perkins in the same article. Not even the Athletic can offer this kind of insightful analysis.

Although renowned for his sublime vision and expert passing, the Spaniard would routinely rack up more kilometres on the pitch than anyone else. All while seemingly not breaking a sweat.

But ultimately it was his passing that Xavi was celebrated for. A talented passer is a player who can play the pass that you can pick out from the stands. Despite the thousands of other things going on around them in the blood and thunder of a football match, they can still spot and execute that pass perfectly.

Xavi can play the pass that a fan in the stands would never have dreamt up in a million years.