The beating heart of arguably the greatest club side to have ever graced a football pitch, Iniesta must take his place amongst the world's best midfielders. Not just of his generation, but of all time.

If you want to see Iniesta at his peak, you would have to travel back to somewhere between 2008 and 2012. Alongside midfield partner Xavi, the Spaniard changed the fortunes of a nation, as well as orchestrating unrivalled success at Catalan giants Barcelona.

Iniesta's technical ability was unmatched, eyeing up passes that would seem physically and anatomically impossible to produce. 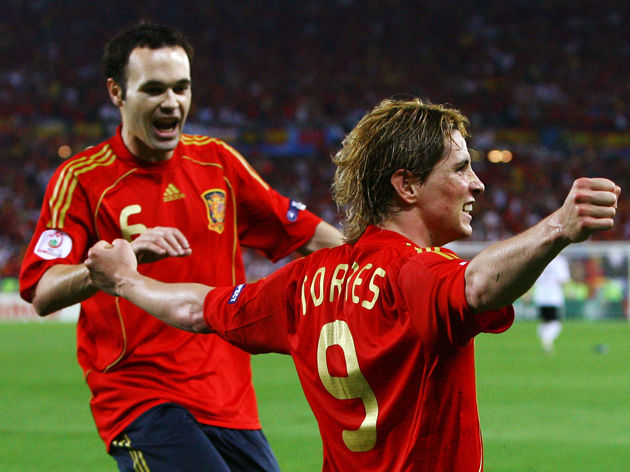 However, United wouldn't be able to stop Iniesta showcasing his quality, playing through injury to provide a sumptuous assist in Barca's 2-0 triumph.

Spain were looking to assert their international dominance on the major stage once more, aiming to be crowned World Cup champions for the first time in their history. Despite a rocky start to the tournament - losing the opener 1-0 to Switzerland - La Roja passed their way in to a blockbuster final with the Netherlands.

The stage was set, and Iniesta didn't disappoint.

The final itself was a fiesty affair - Iniesta was named man of the match, and had earned the respect and love of all those in his homeland - even Real Madrid supporters (briefly).

His god-like status among those in Catalonia continued to grow, with the Spaniard's conquering of world football - under the tutelage of Pep Guardiola - knowing no bounds.

In 2011, Iniesta won his third Champions League trophy, with Barcelona toppling Manchester United, again, in the final. While Iniesta didn't get his name on the scoresheet, the magician still ran proceedings, and was widely considered the game's best performer - even if the glamorous Lionel Messi earned the official man of the match award.

Euro 2012 would soon take centre stage, with the eyes of world football focused with unwavering precision on Spain. Could La Roja win a third successive major tournament? Yes, yes they could.

Despite a fairly routine journey to the trophy - including an emphatic 4-0 final victory over Italy - Iniesta still showed his class on the world stage, yet again confirming that he truly was the planet's greatest midfielder. The Spaniard was voted as the best player of the tournament, and his blend of power and poise was deserving of Europe's elite prize.

Who would have thought that when little Andres Iniesta came through La Masia, that he would go on to make 674 appearances for Barcelona, scoring 57 goals and registering 140 assists?

Probably not many, but that he did, winning 35 trophies in total with grace and unrivalled beauty.