John Charles is number 49 in 90min's Top 50 Greatest Footballers of All Time series.

It is rare to be a genuine legend for clubs in two different countries. But that is a status enjoyed by the late John Charles, whose early career helped build Leeds as an emerging powerhouse in England and who also remains one of Italian football’s greatest ever foreign imports.

Charles played youth team football for home town club Swansea after World War II, but earned a place at Leeds as a 17-year-old in 1948 following a successful trial. His versatility made him a great asset, as did his imposing physical attributes. Yet brute strength was not a cover for a lack of technique, with Charles also a skilled player on the ground as well as in the air. 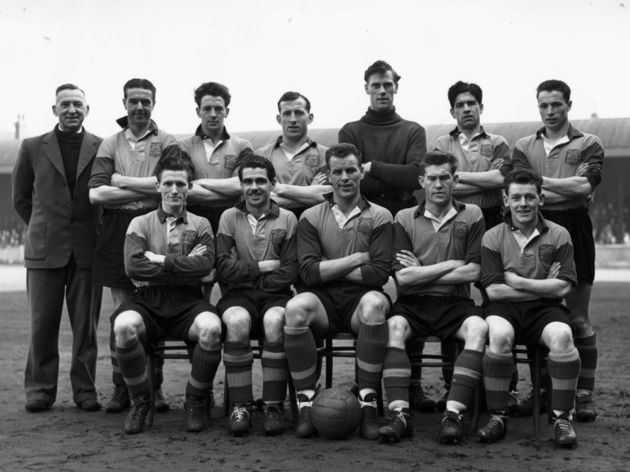 Picture: Charles is in the middle with his Leeds team - a man mountain compared to the rest

It was as a defender that he got his first-team chance at Leeds in 1949, only making the permanent switch to being a forward in the early part of the 1952/53 campaign. And, although certainly very capable at the back, playing in the other penalty area proved to be his calling.

Having scored freely for Leeds in England’s second tier, Charles was made club captain in 1955 and immediately led the club to promotion to the top flight. Remarkably, he then went on to score more in that debut year in Division 1 than he had managed during the Division 2 campaign.

It was then that Juventus came calling and made Charles by far the most expensive British footballer in history when they paid Leeds £65,000 in 1957 – the transfer fee was close to double the previous record of £34,000 set when Notts County signed Jackie Sewell in 1951. Where other high profile Brits that moved to Italy in the years that followed struggled to adapt and returned home quickly - Jimmy Greaves at AC Milan and Denis Law at Torino are the major examples - Charles hit the ground running.

The time he spent with Juventus, particularly from 1957 to 1960, is generally seen as his best.

Charles’ debut season in Italy saw a return of 28 Serie A goals, bringing with it the honour of the Capocannoniere top scorer title. His performances helped deliver Juve’s first Scudetti since 1952, having finished ninth the season before, and he became part of an enduring Old Lady line-up alongside fellow import Omar Sivori and the long-serving Giampiero Boniperti.

His impact in Turin cannot be understated. In ‘Calcio: A History of Italian Football’, author John Foot writes that ‘Charles - with Sivori - transformed the club’. Juve turned their 1957/58 Scudetto into a period of dominance, adding further titles in 1959/60 and 1960/61.

In a league known for defensive football – Inter would soon come to dominate Europe in the years that followed with catenaccio, meaning ‘door bolt’ – Juventus scored for fun. Charles and Sivori scored 50 Serie A goals between them in 1959/60, while Juve scored 92 in 34 games. According to Foot, ‘there is no real competition for the title of greatest British player in the Italian league’, using words such as ‘legend’, ‘superstar’, ‘hero’ and ‘role model’ to describe Charles, a player who was never cautioned or sent off in a football career that spanned 25 years in total.

As much as his vast ability, it was Charles’ character that made him really stand out. His nickname in Italy, Il Gigante Buono, meaning the gentle giant, is a lasting reflection of that.

At his peak, Charles also went to the 1958 World Cup with Wales, still the only Welsh squad to have contested a global competition to date.

gbwls John Charles is rightly remembered as one of the greats of the game in the 1950s. 'The Gentle Giant' was a towering figure who scored goals wherever he went.

At Sweden 1958 he helped @FAWales reach the #WorldCup quarter-finals.

As Serie A top scorer that season, the stage was set for Charles to shine and take an underdog team further than anyone could have expected. His younger brother and international teammate Mel recalled in a 2013 interview that the Welsh association had only booked accommodation for a week. So when Wales played an extra playoff against Hungary after a dead heat in the group stage and then reached the knockouts they first had to go home and then return to Sweden.

Charles scored in the initial draw with Hungary, but he picked up an injury in the playoff against the 1954 finalists – Mel remembered the Hungarians ‘kicking hell out of him’ – and was subsequently ruled out of the quarter-final tie against eventual champions Brazil.

A little known 17-year-old by the name of Pele scored the only scrappy goal of the game. Charles and Wales did win the British Home Championship in 1960, but what might have been against Brazil remains a huge unanswered question in Welsh sporting history.

“We had a good chance of winning the cup,” Mel said. “We had a bloody great team, and I’m not giving you any bulls**t. Against Brazil, we hit the post twice and the crossbar, and then Pele comes through, miss-kicks, and scores. It just trickled in – I can see it now. And I’ll tell you, if big John had played, we’d have beaten Brazil – I’ll always maintain that.” Aged 30, Charles left Juventus in 1962 a legend and returned to Leeds for a club record fee. It lasted only briefly and he was soon back in Italy with Roma following another major transfer, before he eventually wound down his professional career back in Wales with Cardiff.

Charles went on to play in non-league football as player-manager for Hereford until 1971. In his retirement he was awarded a CBE in 2001 for services to football and was voted into the English Football Hall of Fame in 2002. The John Charles Stand at Leeds’ Elland Road home is named in his honour, while a 1997 fan poll named him Juventus’ best ever foreign player.