4 of the Best Moments of Giuseppe Meazza's Career

​One of the game's first, pure technicians

Brace on His Debut

Giuseppe Meazza was born #OTD in 1910. One of the great attacking players of the 1930s and a legend of Italian football - winning the WC in 1934 & 1938, captaining the side in the latter. Having played for both #Inter & #Milan, the San Siro stadium was renamed in his honour. pic.twitter.com/jrttwPkBzr ​Meazza would win the first of back-to-back World Cups under manager Vittorio Pozzo in 1934, helping his country dispatch of Czechoslovakia 2-1 in the final.

Hosted in Italy, the tournament was thrown in disrepute by the intervention of the Fascist government with match officials and the aggressive gamesmanship exhibit by a number of teams - none more so than Pozzo's Azzurri.

Despite this, Meazza's brilliance shone through. Pulling the strings in a withdrawn forward role, the Bull Fighter - as he was affectionately known - skipped around the pitch with a youthful exuberance that saw him elected player of the tournament.

The Battle of Highbury

Italy at White Hart Lane 1934
Before the ‘Battle of Highbury’

A scrappy... no, scratch that... an outright violent affair, Italy's trip to Highbury to take on England in 1934 has been immortalised as one of the craziest games of football of all time. ​

Italy would lose defender Luis Monti to a broken foot caused by robust challenge in the opening exchanges - the first of many tackles of its type. With substitutes not permitted, the Azzurri were forced to play the rest of the game with ten men and

Meazza managed to pull two goals back for the visitors and though it would not be enough to salvage the game - with the hosts running out 3-2 winners - he had left his impression on the tens of thousands in attendance. 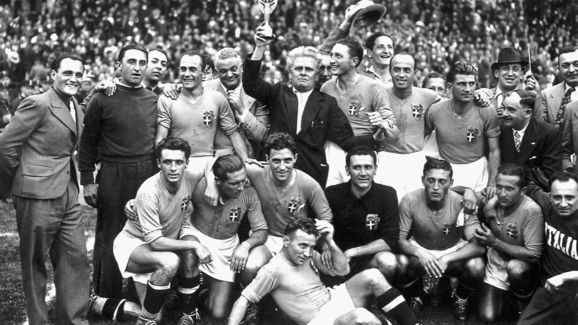 ​Italy won their second World Cup just four years after their first triumph in 1934 - this time with Meazza as their inspirational captain.

Victories against Norway, France and Brazil set Pozzo's side up with a meeting against Hungary - who had scored 13 goals en route to the final.

Despite this it would be Italy who would triumph in one of the most exciting World Cup climaxes of all time. The Azzurri ran out 4-2 winners with the Bull Fighter once again pulling the strings in his withdrawn forward role.