5 of the Best Moments of George Weah's Career

Because he is quite possibly the greatest African football of all time. Well, we think he is anyway. And it's our list. Let's move on.

Hailing from the nation of Liberia, you'd earn serious brownie points if you could pick that out on the map. You needn't, though, because I'll tell you it's a west African country that produced a one particular footballer who turned out to be the 43rd best the world has ever seen.

Oh, and he's now their president.

Quite simply, ​there's far too much to pack into one list. So instead, here are five of the best things George Weah did with a football. Weah was far too good for the Liberian Premier League, that much was clear. A move to Europe was both imminent and deserved, with none other than Arsene Wenger being the man to do so. Moreover, he did it for a snip at just £12k.

Monaco was to be his first European port of call in 1988. There it took him only a year to earn international recognition as he scooped the African Player of the Year award, but it would not be until 1991 when a club trophy would follow.

Five goals in five Coupe de France clashes propelled Monaco to the final of the competition, where a narrow 1-0 success over Marseille would see Weah claim his first European club title. It would not, however, be his last, let alone his last in this particular tournament. Such was Weah's brilliance in the south coast of France, it didn't take long for the nation's capital side to snap him up at the beginning of the 1992/93 season. His time at Paris-Saint-Germain is widely regarded as the peak of his career, lifting countless trophies while earning a reputation as one of the continent's finest strikers, or indeed, players.

His first two seasons at Monaco both saw third place finishes, while his last two were within touching distance of the league title having placed second on both occasions. Which is why it must have been all the sweeter to banish those demons and at last secure the French First Division crown in his second season at the club.

Alongside being the club's top scorer domestically, Weah shone on the biggest club stage of all with some dazzling performances for PSG in the Champions League.

He bagged six goals in six group stage matches, including one of his most memorable goals away at ​Bayern Munich. Heading into the final ten minutes of match, Weah picked the ball up 35 yards from goal before promptly sitting two players on the floor with deft movement. Charging towards goal he left another defender in his wake with a fine dummy, before launching an unstoppable drive into the top corner leaving Oliver Kahn helpless. ​Stop reading and watch the above video again. I saw again because you should have seen it already....it's spectacular.

A 3-2 aggregate success over Barcelona in the knockout stages saw Weah net again, but they were to be undone in the semi-finals by Italian giants ​AC Milan. Nevertheless, the Liberian still claimed the Golden Boot award with seven goals; yet, what would come as a result of his superb individual season would be etched into history forever, and a vastly more prestigious title.

If you ever end up in a quiz of sorts and 'Ballon d'Or winners' crops up then Weah's name is always a solid punt if you're looking for obscure answers.

It shouldn't be, though. He was fully deserved of his title after a scintillating season for PSG and Milan both domestically and on the European stage. If you didn't know he'd achieved this accolade before, remember it now. The fact he also won the FIFA World Player of the Year award says enough. It was a truly spectacular year for 'King George'.

Furthermore, he didn't scoop the Ballon d'Or unopposed. A certain Jürgen Klinsmann finished runner-up after bagging 29 goals in 50 appearances for Tottenham in his one and only season in England. Dennis Bergkamp came second in the World Player of the Year rankings, but he finished a full 90 points behind him in the scores. King George was the best in the world.

To date he remains the only African player ever to lift either award, let alone both in the same year.

Serie A Title in Debut Season 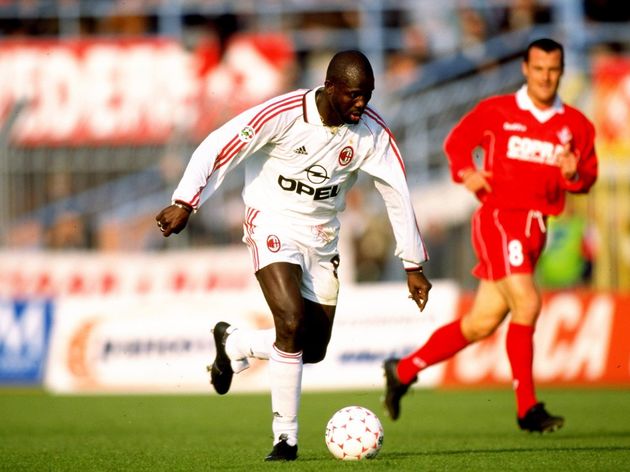 His time at PSG had ran its course. The need to test himself in another league beckoned and, as the world's best player, there were plenty of suitors.

The side to offer him that opportunity was Milan. A team that were in control of ​Serie A during the early 90's and were one of Europe's most dominant sides. PRoberto BaggioDejan Savićević

This was a player capable of slotting into any side without fluttering. His talent alone meant that bedding into new systems and styles was effortless, but his hard work and dedication made it possible. Naturally he became a fan favourite immediately after a stunning debut season, before going on to claim another Serie A title in the 1998/99 campaign.