5 of the Best Moments of Ruud Gullit's Career

If you weren't already aware, 90min is currently running a series that looks at the 50 greatest footballers of all time.

50 players who, not only were one of the best in their time, have helped shaped the game for others, revolutionising football in their own unique, wonderful way.

And what better way to describe legendary AC Milan and Netherlands legend, Ruud Gullit, than as a revolutionary? After all, Gullit is a man who adopted and evolved Johan Cruyff's 'total football' concept, helped AC Milan dominate domestic and European football, as well as leading his country to European Championship glory.

But, what moments I hear you ask, will Gullit be remembered for? Let's take a look and reminisce...

1987 is a year that holds many special memories for Gullit, and in many respects, was the catalyst for his ascension into one of the world's best players.

A stunning domestic campaign with PSV earned the flying Dutchman a move to Italian giants ​AC Milan, who under the management of Arrigo Sacchi, were about to embark on a journey to the very top of the game.

He scored goals for fun, set many more up and quickly asserted himself as one of the best all-around players of his time. Appropriately, he was named the best in Europe and around the world. By the time the 1988 European Championship swung around, Dutch football had been in the doldrums for the best part of a decade.

The glory years that Cruyff and Rinus Michels had helped orchestrate in the mid to late 1970s were well and truly over, and three successive tournaments - two World Cups and one European Championship - had gone by without Dutch participation.

But inspired by Gullit, who was captain of the side by this point, Netherlands turned things around to lift their first ever major trophy - beating Soviet Union in a final remembered for that Marco van Basten volley.

As great European performances go, AC Milan's thumping - and frankly unbelievable - 5-0 win over Real Madrid has every right to be regarded as one of the best ever.

In fact, it may be the best ever.

Gullit himself was wonderful, scoring a terrific header to kill the game off before half-time, before his assist allowed Van Basten to rifle home a fantastic fourth. In the aftermath of that game, Gullit underwent surgery and faced a race against time to be fit for the final against Steaua Bucharest.

Fortunately for Milan, they need not have worried - because not only did Gullit get himself fit, he put in one of the most commanding performances ever seen in a European Cup final.

Two goals, combined with a ruthless display of attacking pizzaz and endless amounts of running, overwhelmed Steaua, who are yet to appear in another top tier final. 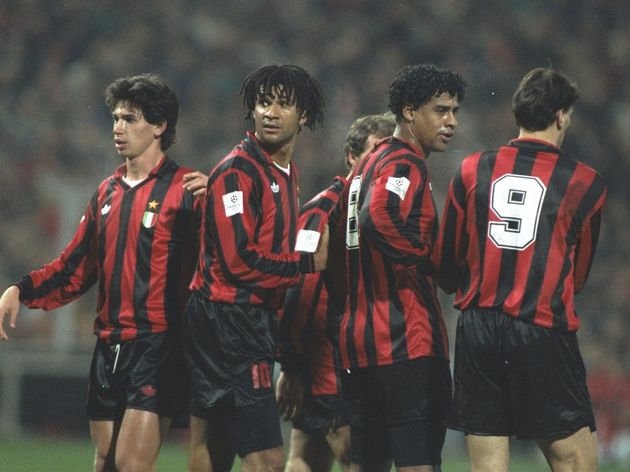 Gullit was at his peak between 1986 and 1989, undoubtedly, but there's no questioning his continued influence at Milan, despite a raft of serious injury problems.

His experience and adaptability came to the fore during the 1991/92 season, largely because a knee problem had effectively killed off his ability to go on multiple lung-bursting forward runs.

So instead, Gullit took on a slightly more withdrawn role, dictating play and popping the ball around with effortless ease. AC would go a staggering 58 domestic games unbeaten, reaffirming their status as one of the game's greatest ever sides - masterminded by the irrepressible Sacchi.

Gullit played a major part in that success, securing his place among the world's footballing elite.