​Borussia Dortmund will make one last-ditch attempt to convince Jadon Sancho to remain at the club beyond the current season by lining up a bumper new deal with a significant pay rise attached.

Sancho is very good at football. So good, in fact, that other clubs across Europe really want to sign him. Even more than that, said club(s) are willing to pay whatever it takes to ensure his Bundesliga adventure is brought to an end this year.

A host of sides have been linked with the Englishman's prized signature, but none more so than ​Manchester United. It's a story that has been rumbling on for some time but doesn't look to be going anywhere anytime soon. Not only that, but ​90min has been repeatedly told since September that the Red Devils are 'confident' that they lead the pack when it comes to signing the forward.

The fee could rise to a near-eye watering £120m, which given that his current deal runs until 2022 and he's been in such outstanding form is an understandably high figure.

Naturally, ​Dortmund don't want to lose their superstar, so as ​Bild report, they'll look to make one last big effort to keep hold of his services for another season at least. Looking to put up a fight to avoid selling, the publication report that a new deal offered will see his 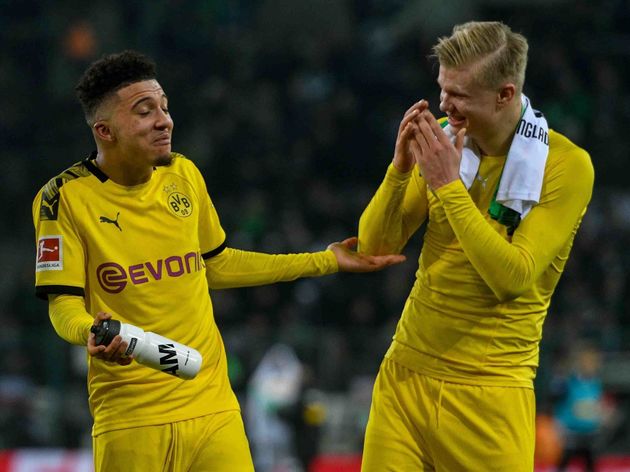 Dortmund's CEO, Hans-Joachim Watzke, ​previously suggested that the club would not stand in the way of the player's desire - should he want to leave - but the latest developments suggest there is a feeling of progress being made in regards to Sancho's future.

United are not concerned by the fee, however, and if the player does decide to embark on a new challenge, it's likely that the ​Premier League side will have already passed the biggest hurdle of any negotiations. Liverpool and Chelsea have also been linked, but United lead the way.

The Red Devils are also unlikely to be disturbed much by reports of the bumper contract offer, considering United's own pay packet for Sancho would likely match or even exceed £167,000 a week. The likes of Marcus Rashford and Anthony Martial ​are reportedly on £200,000-a-week deals.