Back in the days when live football was still on our screens, there was a certain type of player all too common in Serie A.

Then you notice them do it again and when the commentator mentions that they're in their early 20s you think you've spotted the next hidden gem for all the time it takes you to find out that... yes, they're on loan from Juventus.

Yet, while they may seem like a star in the making for the likes of Genoa or Parma, often these players don't make the cut in the black and white of Juve. So, let's take a look at these loanees and how they might get on back in Turin when the next season does eventually begin. 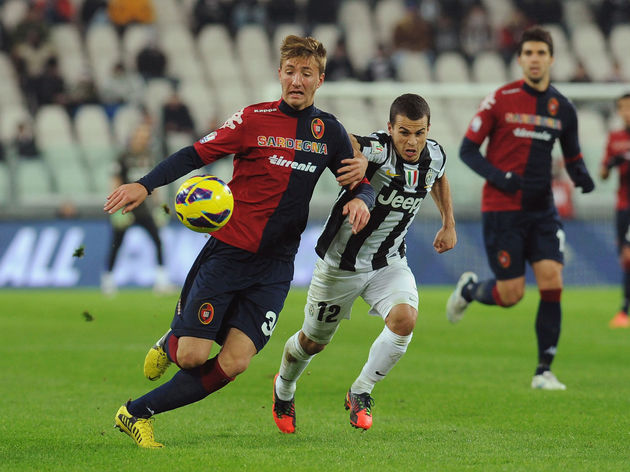 Dario Del Fabro has had a career more akin to a Chelsea youngster than a Juventus starlet so far. Still only 25 years of age, the Italian defender has already played for ten different clubs while being on a never-ending loan cycle from first Cagliari before he joined ​Juve in 2017.

This season was the first time Del Fabro has enjoyed a prolonged run in a country's top flight as he broke into Kilmarnock's first team.

Despite being at the club for almost three years, Del Fabro has never made an appearance for Juventus' senior side and that doesn't look like changing in the near future.

With the likes of Matthijs de Ligt, Leonardo Bonucci, Merih Demiral and Giorgio Chiellini vying for that centre-back slot, it seems Del Fabro's future is destined for another loan away from Turin.

Likelihood of Making it at Juventus: 1/10 In theory, Marko Pjaca has everything to make it as a footballer. He's 6'1 and well built, has a good burst of pace and is reasonably comfortable on either foot, but for one reason or another the 24-year-old Croatian has never really established himself outside his country of birth.

After being given just 15 minutes of Coppa Italia action in the first half of the season at Juve, Pjaca was loaned out to Anderlecht in January. But due to the outbreak of coronavirus, he was only able to make two starts for the Belgian side.

Likelihood of Making it at Juventus: 2/10 After impressing as Genoa's first-choice goalkeeper for five seasons Perrin made the move to Juventus. Admittedly it may seem a bit unambitious to swap regular football for a spot on the heated seats of Juve's bench, but Perrin could argue it was an ambitious move and that he went there with the intention of unseating

Likelihood of Making it at Juventus: 2/10 In his debut for Genoa, after the club snapped him up for less than £4m, the centre-back played the full 90 minutes against Juventus as his side claimed a famous point at the home of the champions.

The following game would see Romero score his first goal for Genoa with his first shot in ​Serie A, thumping in a towering header. Seven minutes later he picked up his second yellow card of the game and was off for an early shower.

His first campaign in Italy was largely impressive while peppered with some red mists (he got ten yellow cards and two reds in 27 league games) but it was enough to convince Juventus to cough up £23.4m, giving Genoa almost a £20m profit.

Romero was loaned back to the club for this campaign and has continued to be the bright spot in an otherwise dire season for the relegation-threatened side.

Ten more bookings this campaign hasn't exactly seen him cool down but he is an exciting prospect who will likely be playing the role of back-up for Juve next season but at 21, there's plenty of time to break into the starting lineup.

Likelihood of Making it at Juventus: 6/10 Likelihood of Making it at Juventus: The Swedish 19-year-old had been one of the most exciting talents in the first half of Serie A this season when Juventus moved in to swiftly secure his services in January for £31.5m, making him the second most expensive winter transfer of the year (behind Manchester United's Bruno Fernandes).

​Kulusevski was loaned back to Parma for the rest of the campaign (where he was already on loan from Atalanta) where he has five goals and seven assists this season.

Fast, clinical and an excellent dribbler, Kulusevski has become one of the most exciting talents in European football and isn't just concerned with the attacking side of the game. Only one player in Serie A this season (Inter's Marcelo Brozović) is averaging more kilometres per game than Kulusevski.

Parma have greatly benefitted from the left-footer's versatility as he's played as a winger, number ten and false nine while their other forwards have been plagued with injury.

Likelihood of Making it at Juventus: 8/10