Manchester United forward Marcus Rashford could have a significant role to play if the club is to complete a summer deal for Borussia Dortmund star Jadon Sancho likely to exceed £100m.

Players can often be swayed towards certain clubs over others because of people they know, friends who can given them the inside track, tell them why it’s good, give them a reason to join and offer an immediate familiar face once they do. Rashford can be just that for Sancho. The pair are already friends and are openly pally when they get together on England duty. At 22, Rashford is something of a mentor and guiding light for 20-year-old Sancho as he too begins to approach superstardom.

On Wednesday morning, Rashford wished Sancho a happy birthday as he left his teenage years behind. Rashford also tweeted Sancho among a handful of people as he searched for more support for charitable organisation FanShareUK to ensure that children from struggling families remained fed while schools are closed due to coronavirus.

Sancho, who had managed 17 goals and 19 assists in 35 appearances across all competitions this season before football was put on hold, is the missing link for United on the right flank. It is a position the club has lacked a specialist winger or wide forward for many years.

90min revealed as far back as September that United are confident they will be able to sign the player this summer and are prepared to pay what it takes to make that happen.

It was later further reported in Germany in February that Sancho is expected to leave Dortmund ahead of next season, while 90min again reported that month that United remained confident.

A source told 90min that despite Sancho being linked with a host of clubs, including Liverpool, Chelsea, Manchester City, United are firmly in the driving seat.

In addition, reputable Italian journalist Fabrizio Romano has backed that up further this week during a social media live stream video.

“Manchester United have been in contact with Jadon Sancho’s agent for two months and are working on his contract. The coronavirus pandemic is making it hard to communicate with Borussia Dortmund [but] United are confident,” he explained.

Similarly, the Evening Standard has also now reported that Ole Gunnar Solskjaer and Ed Woodward view Sancho as an ‘ideal fit’ for United and that the Old Trafford club are promisinglconsidered favourites to land the player by ‘well placed sources’ at Dortmund. 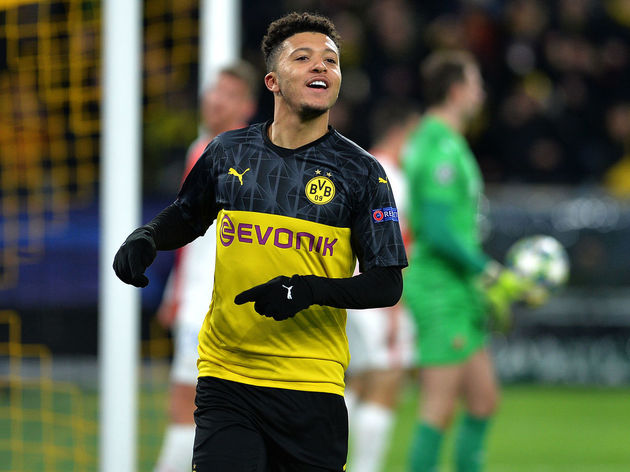 City are considered more likely to pursue Adama Traore, while Liverpool’s transfer policy very deliberately isn’t geared towards high profile marquee signing like Sancho. Chelsea, meanwhile, have plenty of resources after raising money through player sales, but more immediate priorities for strengthening the squad lie in other positions like left-back and up front.

United will not be beaten on price when it comes to Sancho and their commitment to signing him has made him feel so wanted that it has even been suggested potentially having to give up Champions League football to head to Old Trafford would not impact his decision.

United are in the process of overhauling the culture in the squad and, together with Rashford, Sancho could be considered one of the new leaders of a fresh generation. That, and he could even have the club’s iconic number seven shirt, which he currently wears at Dortmund.