He was hardly unknown when Real Madrid visited the Westfalenstadion in the Champions League semi-final in 2013, but Robert Lewandowski still lacked any sort of genuine fear factor for the travelling centre-backs.

The Polish striker was entering his third year in Germany after a £4.2m move from Lech Poznan, having scored just nine goals in his first season before netting a much more impressive 30 across all competitions the next.

Lewandowski had been outscored by Klaas-Jan Huntelaar at local rivals Schalke during the 2011/12 season, and it would still be another two years before he won his first Borussia Dortmund 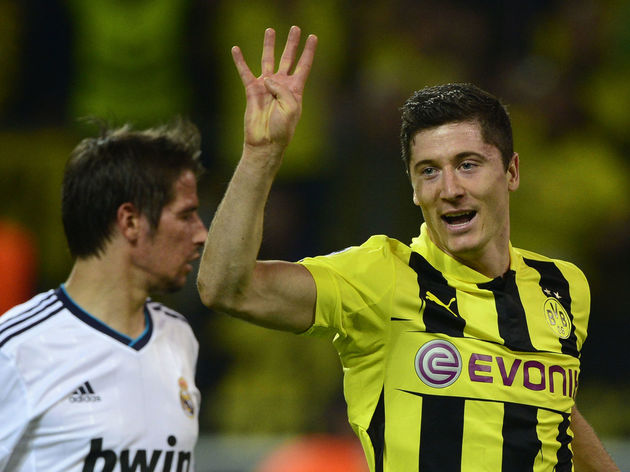 He was coming back from an ankle injury that ruled him out against Darmstadt the week earlier so only started on the bench at the Allianz Arena, but after Wolfsburg's Daniel Caligiuri scored the only goal of the first half, manager Pep Guardiola brought Lewandowski on at half-time.

Lewandowski's first goal was simple, crossing over the line with the clock sitting on 50:39.

Replays of Bayern Munich's equaliser had only just stopped when he fired a shot from outside the box and past Diego Benaglio (51:40), while a brief scramble inside the penalty eventually saw the Polish striker complete his hat-trick (54:02).

Lewandowski is both Bayern Munich (202) and the Bundesliga's (211) top-scoring foreign player, while he's also on course to become the German top-flight's third-best goalscorer ever by overtaking Manfred Burgsmüller and Jupp Heynckes later this season.

Despite this, Lewandowski has still never featured on the Ballon d'Or's final three shortlist and he's seldom mentioned in conversations about European football's best-ever players.

"I think Lewandowski is on another level," Ian Joy, the face of the Bundesliga on Fox Sports, recently told the Gegenpressing podcast while discussing Bayern Munich's long list of legendary strikers.

"Lewandowski, with the records that he's breaking, with how many goals that he's scoring and how quickly he's scoring them - he's up there with probably the top 10 players ever. I don't think enough people are talking about the job he had done in the Bundesliga and how good he is."

It's quite the claim. It might even take a few moments to really rack your brain about what's been said, especially given that Lewandowski is almost never mentioned in these conversations.