Arjen Robben: The Flying Dutchman Who Became a Modern Legend at Bayern Munich

Arjen Robben is number 20 in 90min's Top 20 Greatest Footballers of the Decade series. Follow the rest of the series over the course of the next four weeks.​

When you play at the same venue at five-a-side for long enough, you start to get familiar with your opponents.

After a few league seasons - which tend to only last a couple of months each - you're defending as part of a two-player rearguard, when you spot a You remember this as that player has sprinted away from you in previous games with the agility of a cat before bending shots into the top corner.

Each time it happens, you puff your cheeks out and think:

Funny enough, the problem is there's a difference between identifying a strength in a baller's game and actually stopping them playing to that strength.

And that's why, over the last 15 years or so, defenders across Europe struggled to deal with Arjen Robben.

No one figured out how to stop the Dutchman from shifting the ball on to his left foot from the right wing and curling goal after goal into the far corner. Robben was lightning quick at the start of his career but as that pace declined once he started to reach the twilight of his career, he would find new ways to find that yard of space for a shot. He was a genius who, despite being plagued by injuries throughout his career, has left an indelible mark on European football; particularly in Germany's Bundesliga.

But let's tone it down a bit for now, and get to his legacy later.

Robben was born in Groningen, and broke into the Eredivisie club's first team in the early 2000s. Recognition and admiration followed, resulting in a move to Dutch giants PSV.

Robben played league football in four countries, and won the top flight title in each nation. With PSV, he scored his first in 2002/03, a season in which he netted 12 Eredivisie goals as part of the 'Batman and Robben' partnership with Mateja Kezman. The Serbian scored an unbelievable 35 league goals that year, but he's not the one we're focusing on right now.

​The following season brought a second place finish and talk of a move to Manchester United - however, Sir Alex Ferguson and co. lowballed PSV and Chelsea swooped in instead in March 2004 to sign the Dutchman, but he couldn't make his competitive debut for the Blues until November later that year, having been injured in a pre-season friendly against Roma. However, whenever Robben did play, he made sure those who watched him wouldn't forget him in a hurry.

Under Jose Mourinho, Robben made Stamford Bridge his playground, alongside Irish hero Damien Duff. The pair ran riot on the wings, providing for striker Didier Drogba whilst other Blues stars like Claude Makelele, Frank Lampard, John Terry and Ricardo Carvalho ensured everything went smoothly behind the frontline.

It usually did, and in the three seasons Robben spent in south west London he would win two Premier Leagues, one FA Cup and two League Cups.

That sort of record usually gets some of Europe's heavyweights interested, and Real Madrid eventually lured him to Spain when Chelsea accepted an offer of £24m for their flying Dutchman. 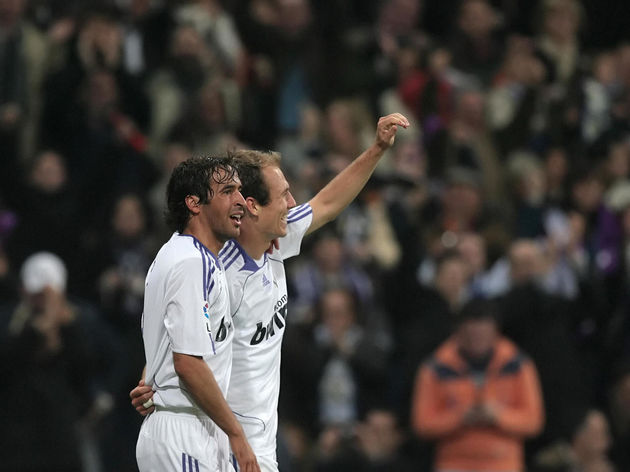 Just one La Liga and a Supercopa de Espana came Robben's way with Los Blancos and he was shipped off after just two years as the club went big on marquee signings, attracting Kaka and Cristiano Ronaldo in the same window.

But that's not to say Robben was a failure at the Bernabeu.

In a Clasico when Real had already wrapped up the league title, Barcelona formed a guard of honour for their bitter rivals and were then smashed 4-1, Robben scoring the second goal.

When the inevitable departure came, Robben admitted he didn't want to leave and cited the club's desire to sell him as the key reason for his departure.

Sure, at the time Robben might have been slightly disappointed to swap Real Madrid for Bayern Munich, even if there's barely a smidge separating the two clubs' stature, but there's no doubting the switch had to happen for Robben to cement his place as one of the modern greats.

After all, he had picked up four leagues titles in his time with PSV, Chelsea and Real Madrid, but the Champions League proved elusive.

But before all that, Bayern had a Bundesliga title to reclaim, having missed out to Wolfsburg the previous season.

And Robben would play a key role in that campaign's title success, scoring 16 goals in 24 Bundesliga appearances, finishing as the club's top scorer in all competitions with 23.

He also scored perhaps the most famous goal of his career in that season, connecting in emphatic fashion from the edge of the area to pummel home Franck Ribery's floating corner in a topsy-turvy Champions League tie against Manchester United; with Bayern reaching the semi finals courtesy of away goals. 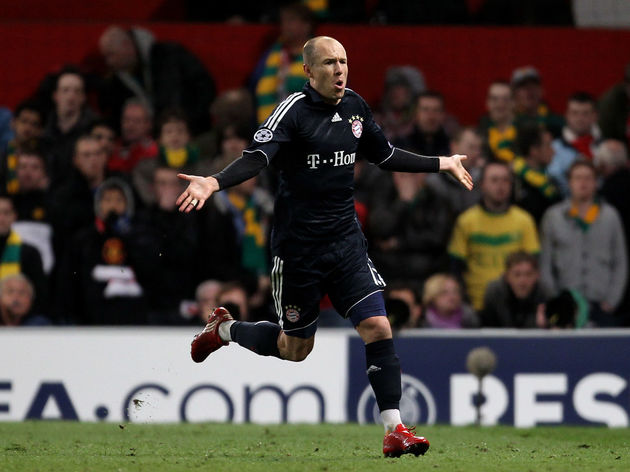 But the following season was a disaster for both Robben - despite his impressive individual performances - and Bayern. At no point during the 2010/11 season did Die Roten lead the Bundesliga title race. Instead, a Jurgen Klopp led Borussia Dortmund finished ten points ahead of Bayern, who finished third behind second placed Bayer Leverkusen.

Robben actually managed 12 goals in 14 league appearances, but Bayern struggled without the Dutchman, who hadn't properly recovered from a hamstring problem after playing in the 2010 World Cup, resulting in the winger missing the opening months of the campaign.

More heartbreak would follow the next season, Bayern being pipped again to the league title by Dortmund before being beaten by a 'Written in the Stars' Chelsea side in the Champions League final on penalties at the Allianz Arena.

#TBT to this unforgettable Arjen Robben solo effort against Leipzig. 🤯

Thankfully for Robben, however, Bayern would reach the final again the next season, and the winger would have a huge say in deciding the outcome.

At a packed Wembley, Robben put on a show.

Some marvellous play on the left saw him set up Mario Mandzukic for a tap in for the game's opener in the 60th minute.

Dortmund were back on level terms eight minutes after thanks to an Ilkay Gundogan penalty, but it was Robben who mended Bayern's broken heart with a career-defining goal.

In the 89th minute, Robben galloped on to 'Robbery' partner Ribery's flick, slaloming through the Dortmund defence and scuffing a left footed shot past Roman Weidenfeller to win Bayern their fifth European Cup -12 years after their fourth. It was probably one of the Dutchman's uglier goals in a career filled with absolute peaches, but the strike remains of his more picturesque, just for the jubilant scenes that followed.

Internationally, Robben lit up two World Cups, finishing second with the Netherlands in 2010 before going one worse in 2014. The national team fluctuated in terms of quality

Alongside a handful of other players, Robben was responsible for bringing Bayern out of a relatively dark place - especially after the two season league losses to Dortmund - and making the club the best in the land again. His trademark cut-in and shoot manoeuvre, gleaming bald head and stacked trophy cabinet will not be forgotten. Neither will his sometimes silly diving theatrics, but hey, we're concentrating on the positives here.

Bayern currently have wingers like Kingsley Coman and Serge Gnabry who can become greats themselves at Germany's biggest club, but there's no doubt that since his retirement the Bundesliga has lost an awful lot of swagger and an absolute wand of a left foot.

Thanks for the memories, Arjen. Hopefully the next great inverted winger is just around the corner.