Mohamed Salah: The Humble King Who Conquered Rome and Took Liverpool By Storm

Mohamed Salah is number 19 in 90min's Top 20 Greatest Footballers of the Decade series. Follow the rest of the series over the course of the next four weeks.

If you were to pay attention to the Premier League and the Premier League only, then the story of Mohamed Salah might put you in mind of legendary blues singer Robert Johnson, whose rapid rise in guitar-fretting ability led some to believe he sold his soul to the devil in exchange for a shortcut to the top.

Like Johnson, Salah showed a good deal of promise as a fledgling professional, but when given his chance ​under the bright lights - the first time around, at least - he choked, failed to impress, and was forced to find another route to the top. 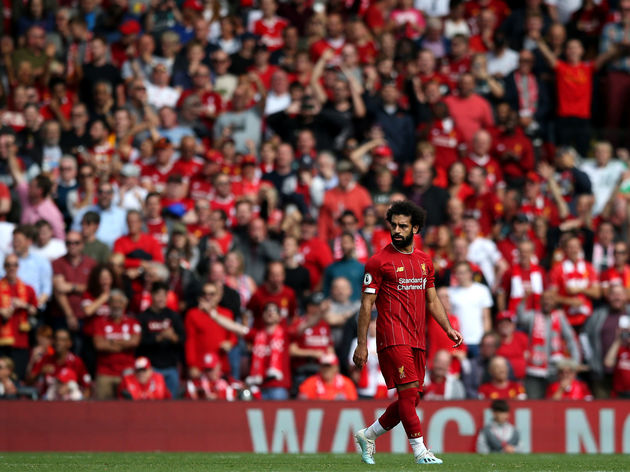 But while Johnson's 'deal with the devil' came at some point during a mysterious year-long disappearance, returning out of nowhere as the best guitar player in the world, Salah's was negotiated largely in the public eye in Florence - it's just that those in England took little notice of it until he was well on track for his first of two ​Premier League golden boots.

When he left ​Chelsea, initially on loan to both Fiorentina and then Roma before completing a permanent move to Italy, he did look like a player whose confidence had taken a beating. He had starred for FC Basel and earlier in his native Egypt, and made his mark in the Europa League with the former. But try as he might, his January 2014 move to England didn't ever look like taking off. And while it's often his time in Rome that is credited with putting him back together and moulding him into the truly world class talent that led ​Liverpool to European glory, the truth is that by the time Rudi Garcia moved to bring him to the Italian capital, he was already well on his way.

The real risk had been taken six months earlier by Fiorentina boss Vincenzo Montella, whose three-year tenure in Florence was not only one of the most consistent runs in the club's recent history, but one famed for the platform it offered to foreign outcasts to revive faltering careers.

One Micah Richards had been brought in that summer, while Montella's previous recruits Stefan Savic and Marcos Alonso were mainstays in the defence.

In that company, then, it really was down to Salah to separate himself from the crowd and prove he wasn't just another educated gamble that wouldn't pay off. It was time for him to roll up his sleeves and show the world what ​Mo Salah was really all about. Joining on what was supposed to be an 18-month loan in January 2015, he wasted no time in getting off the mark, floating in from the right to open the scoring against Sassuolo in his first start for the club. Looking back at it now, you can almost hear the warning signs.

He'd go on to hit nine goals in 26 appearances - a tally that now seems modest, but was revelatory by his standards at the time - including winners against Inter, Juventus and Tottenham in three separate competitions, all within the space of a month.

Suffice to say that by the end of the 2014/15 season, his previously damaged reputation had been restored to what it was 18 months earlier - and with a bit of change. So much so that Fiorentina fell over themselves in an effort to trigger a contractual clause that would bring him to the club permanently, but there was some confusion, and as the club underwent a managerial change, Salah himself didn't quite fancy it. He had enjoyed his time in Italy, however, and after he briefly cut the loan spell short, he sealed his move back to Serie A, this time with AS Roma. The Italian runners-up had negotiated a season-long loan with an option to buy, a clause that Chelsea would later find themselves rueing.

There was little need for an adjustment period, as he stepped into a settled Roma side who knew exactly how they wanted to use him.

Though they regressed slightly from second to third in Serie A in 2016, Salah's scintillating displays were a highlight, as he ended his debut campaign as the club's top scorer with 15 goals. In particular, he struck up a formidable partnership with Edin Dzeko, that saw the Romans score more goals than anyone else in Serie A - Juventus included. By now he was flying, and the 2016/17 campaign saw him go from strength to strength. Roma returned to their rightful spot as runners-up to Juve, Salah's 19 goals and 15 assists from his now-trademarked role on the right wing curried the favour of half the continent - although Dzeko's remarkable 39 strikes did leave him in the dust in the scoring charts.

As that season drew to its conclusion, about 1,300 miles north-west, Liverpool manager Jurgen Klopp was beginning to get a tune out of his new team. Through their fourth-placed finish in the Premier League, they had secured their long-awaited return to the Champions League, and Klopp found himself in pursuit of the final piece of his attacking puzzle.

Salah was of course identified as the man to join Sadio Mane, Roberto Firmino and Philippe Coutinho in leading the gegenpress for the season ahead, and he was prepared to break the club's transfer record to land him. The £45m deal symbolically buried the previous £35m ceiling that had gone on Andy Carroll, marking the start of a new era of transfers at Liverpool, and one that would lead them to heights unimaginable before Salah's arrival.

In two short seasons, the shape of the team would shift into a dynamic 4-3-3, with the iconic trio of Salah, Firmino and Mane leading the line of a side that would break virtually every attacking record the club previously held. Salah himself became the Premier League's record goalscorer in a single season, the fastest ever Liverpool player to 50 goals, and won the golden boot twice in his first two campaigns.

Yet all the while, he wore the humble smile of a man who counts his blessings on a daily basis.

If he were to retire now, the poetic nature of the Reds' Champions League success would be the crowning achievement fit for an Egyptian King. He left the field in the first half in Kiev clutching his shoulder and watching on in tears as his teammates came up short, yet one year later rocked up in the home city of their previous conquerors, with a resilient attitude that suggested the trophy was his birthright.

He opened the scoring, lifted the cup and closed the book on what would otherwise have gone down in history as just another glorious failure, but is now seen as just a footnote in one of their greatest triumphs.

Iconic simply doesn't cover it for Salah, and his attitude towards the game has not only helped return Liverpool to what many believe they should be, but redefined what is expected of a modern attacker. He bears no arrogance and takes nothing for granted, yet carries himself with the confidence of a forward so cocksure that he could tell you the sky is orange and your first response would be to get your eyes checked.

Having long-since shaken the 'Chelsea reject' tag to become one of the most clinical forwards in the world over the course of the last five years, he will play out the remaining four years on his Liverpool deal, and potentially beyond, with nothing to prove to anyone but himself.

And that's a prospect that may lead a generation of left-backs just not to bother.