Netherlands vs Germany: A Rivalry Contested by Some of the World's Greatest Players

There is, perhaps, no greater rivalry in international football than that between the Netherlands and Germany.

It’s thought that the 1974 World Cup final, which the great Netherlands side of Johan Cruyff and co. lost 2-1 to West Germany, was the starting point for the footballing enmity - as the Dutch had been more concerned with Belgium prior to that game.

But, for an otherwise placid nation, the Dutch resentment felt towards the Germans after that World Cup final may have had its roots in something far deeper - the most obvious source are the events of World War II but many have made arguments both for and against this playing a part in the footballing rivalry.

The Netherlands suffered less than several other nations at the hands of Nazi Germany but countries like Russia and Poland are able to play their football team without turning it into, as the author of Brilliant Orange David Winner describes it, 'an intense psychodrama'.

Hermann von der Dunk, a leading historian of Dutch-German post-war relations believes that the root of this disproportionate response could lie in the feeling of betrayal the Dutch felt when, after more than 100 years of peace and neutrality in Holland, the Nazi invasion and occupation took place.

There are numerous examples of ill-feeling from the Dutch towards their big (and at times bad) German neighbours, with football acting as the medium for this rivalry to be played out. 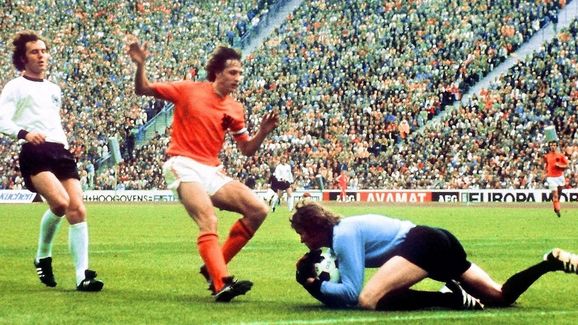 “I don’t like the Germans,” he explained. “Every time I played against German players, I had a problem because of the war. 80% of my family died in this war; my daddy, my sister, two brothers. And every game against players from Germany makes me angry.”

avenged ‘The Lost Final’ of 1974 to defeat West Germany in Hamburg in the semi-finals of the 1988 European Championships. After the match, Koeman used a West Germany shirt, which he had swapped with Olaf Thon for his own, to wipe his backside.

IMAGINE THAT HAPPENED THESE DAYS pic.twitter.com/tcX8iqtBiA

Karl-Heinz Rummenigge, a great German striker in the 1970s and 80s voiced his concern that a global tragedy was constantly being dredged up and entwined with football by the Dutch players.

After a particularly ill-tempered match in the 1978 World Cup (which ended in a 2-2 draw) Rummenigge said, “The pressure was tremendous. The popular press was blowing up the old rivalry…I think it's a true shame and pity that they regard football as an outlet for their hatred from the Second World War.”

The idea that this desire to hark back to World War II is one favoured more by the Dutch than Germans is conveyed by the German author Ulrich Hesse in ​FourFourTwo.

“As far as Germans are concerned, you can sum up the situation in two statements. First, Holland-Germany is one of the most heated rivalries in Europe. Second, the mentally unstable party in this explosive relationship are the Dutch.”

There is a persisting sentiment from the Dutch that they were the more skilful, cultured footballing nation while the Germans relied upon fitness and physicality. ​Johan Cruyff, the greatest Dutch player of all time, explained this in an interview with ​ITV: “The quality of the Germans are, they are always very strong, physically they are very, very strong. They can run until tomorrow…We were more technical, which means with skills, we had to survive.”

This is unquestionably a rather harsh and sweeping generalisation which hasn’t exactly stood the test of time. Even in the Germany side Cruyff would have faced, they possessed some incredibly gifted players such as Franz Beckenbauer or ​Gerd Müller and in the modern day Cruyff himself distanced the Dutch team of his era from the rather more robust Netherlands side which reached the 2010 World Cup final.

In the two to three decades which followed the 1974 World Cup final, despite these two nations often boasting some of the world’s best players, their matches would often be dominated by more unseemly acts of skulduggery by sportsman capable of such skill - most notably when Frank Rijkaard spat in Rudi Völler's mullet at the 1990 World Cup.

Yet, as time has gone on, and the tensions of the Second World War have faded even further from the minds of the players, the needle between the teams has diluted.

In recent years this could be simply a question of familiarity as, in less than 12 months between 2018 and 2019, the two nations played four matches in the inaugural edition of the UEFA Nations League and qualifying for the European Championships ​postponed to 2021.

Overall, they have played each other 44 times, with Germany (including games when they were known as West Germany) winning 16 times to the Dutch’s 12 and 16 draws apiece.

However, in their five matches at World Cups, the Dutch have never beaten their neighbours, drawing three and losing twice. But that first competitive meeting between the two, back in 1974, still hurts the most and each encounter will forever be played with an element of revenge hanging over the spectacle.