Johan Cruyff: The Master of Total Football Who Changed Everything

In short, Cruyff changed everything. Not just as a footballer on the pitch, but as a coach, pioneer, thinker and tactician – he has already been featured in 90min’s greatest managers of all time.

His lasting legacy at Ajax and on Dutch football as a whole is enormous, while his influence at Barcelona remains strong long after he officially left the club nearly 25 years ago. Those models he was so key to are copied and replicated all over the world, even now. Pele, Diego Maradona, Cristiano Ronaldo, Lionel Messi, all exceptional players that have defined eras. But Cruyff was…more. He changed everything.

Few other players have ever been so central to the development of a tactical system, but Cruyff was. Messi’s part in the rise of tiki-taka at Barcelona around 12 years ago was born out of the Total Football that Cruyff and mentor Rinus Michels brought to Camp Nou in the 1970s.

Together Cruyff and Michels were central to the emergence of Total Football, the fluid style of football that drew influence from the positional freedom and versatility of Hungary's 1954 'Magical Magyars', and moved the game on from the defensive-minded Italian Catenaccio that had steered Inter to back-to-back European Cups in the mid-1960s.

Total Football relied on the principle that every player in a team was technically skilled enough to perform every role, meaning that defenders, midfielders and forwards could interchange at will, often making it impossible for opposing teams to pick individual players up. Defensively, Ajax and later the national team would press from the front and use the offside trap as a weapon.

It governed the way the Cruyff and the Netherlands would play at the 1974 World Cup. “The Total Football the Dutch played that month in Germany was extraordinary,” author David Winner wrote in Brilliant Orange: The Neurotic Genius of Dutch Football. “How could anyone have imagined and executed something so dazzling?"

Cruyff was part of the fabric of Ajax from an early age. He joined the club at 10 and his mother was hired there as a dressing room cleaner two years later after his father died. Initially, he would help ground staff and kitmen on matchdays, before graduating to the first-team himself aged 17.

Ajax claimed a first Eredivisie title in six years during his first full campaign in 1965/66 and were the first Dutch club to play in a European Cup final three years later. On that occasion, they were beaten by AC Milan, but in 1971 Cruyff and Ajax returned to the final and lifted the trophy.

There were further European Cup triumphs in 1972 and 1973, becoming the first club to win three in a row since the great Real Madrid side of the 1950s. And while the first title came as a result of beating Panathinaikos of Greece, the latter two successes were against Juventus and Inter respectively, marking the prevailing of the technical Dutch style over the defensive Italian.

Cruyff wore number 14 on his back for those finals, a display of the personality that was just as important to his football career as his ability with the ball. These days it is practically the norm for players to wear all sorts of shirt numbers, but in the days of 1-11, it stood out. 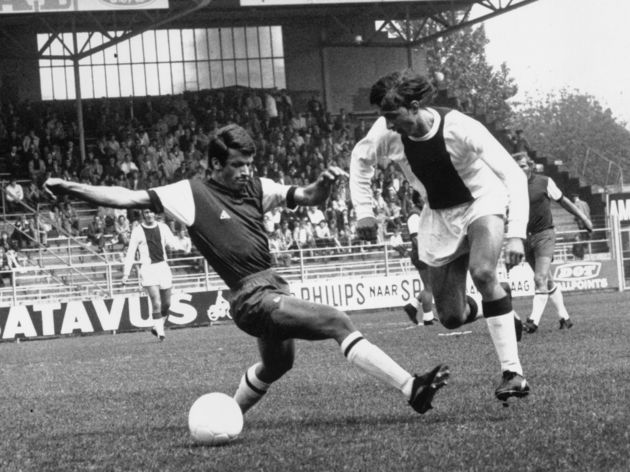 The story goes that prior to an Ajax game in 1970, Cruyff handed his usual number nine shirt to a teammate, Gerrie Muhren, who couldn’t find his own. He then proceeded to take another random jersey out of a nearby basket bearing 14, which would have normally been for a substitute.

Ajax won the game and Cruyff decided he wanted to continue wearing 14, and did so whenever he was permitted, including the aforementioned European Cup finals, as well as the 1974 World Cup even though it went against the Dutch plan for alphabetising numbers.

Cruyff won the Ballon d’Or in 1971 and 1973 during Ajax’s European dominance, matching Alfredo Di Stefano as the only player to have won it twice at that time. In 1973, he then left Ajax for Barcelona in a transfer that close to doubled the previous world record fee, heading to Spain for the equivalent of around £922,000 – the very last record deal for less than £1m.

Barcelona ended a 14-year title drought in Cruyff’s first year and he went into that summer’s World Cup as the best player in the world. Netherlands didn’t win it, losing a close final to hosts West Germany, but arguably remain the greatest team not to lift a World Cup.

That tournament perhaps summed up Cruyff’s effortless genius, not from a goal or any other particularly decisive piece of play, b

“The idea came to me in a flash, because at that moment it was the best solution for the situation I was in,” he recalled in My Turn.

Unadulterated football talent at its most pure, intended for effectiveness and not showing off.

After trading Barcelona for the United States in 1978, Cruyff returned to Europe in 1981, joining Levante after coming close to signing for Leicester. He then began a second spell with Ajax, winning the eighth and ninth league titles of his career, before a fall out over not being offered a new contract led him to join arch rivals Feyenoord at the age of 36. There, he steered his new club to an Eredivisie title of their own, missing only one game along the way.

Even if you were to put to one side everything that Johan Cruyff did for the sport of football as a whole and focus solely on Cruyff the player and his achievements, you still find yourself looking at one of the very best of all time…one who was taken too soon from this world at the age of 68.