Strauss-Howe's ​generational theory states that history moves in cycles, and nowhere is this more true than with Erling Haaland's rumoured signing for Manchester United.

Just as one set of whisperings about the Norwegian's future subsides another one rises up to take its place, slightly different in content but still bearing enough similarities for the reader to experience a strong sense of déjà vu. 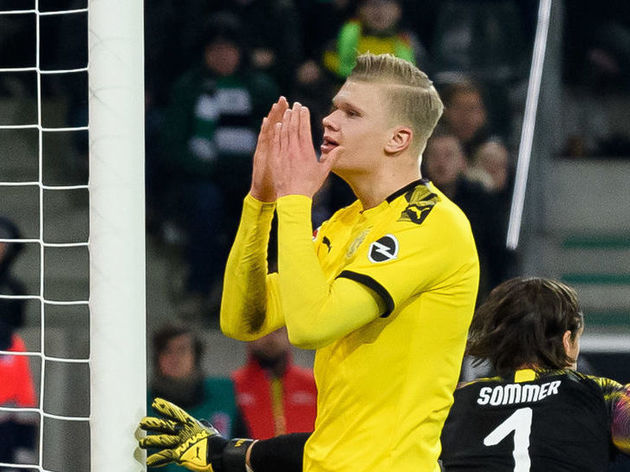 Despite Haaland only joining ​Borussia Dortmund in January, United still harbour ambitions of signing the generational talent, according to ​ESPN. They will be rivalled for his signature by ​Real Madrid, who have made the striker their ​top target when the transfer window opens.

Haaland has been in exceptional form since arriving in Germany several months ago. He scored a 34-minute hat-trick on his Dortmund debut, before going on to grab four more goals in his next two ​Bundesliga games.

Before football's enforced break, he had scored 40 times in all competitions this season - including a bucket load for RB Salzburg.

Haaland has a release clause in his Dortmund contract, giving him and his agent Mino Raiola significant control over his next destination. Despite this, it is widely anticipated that he will remain at Signal Iduna Park until at least the end of the season 2020/2021 season. The insertion of such a stipulation is understood to have put United off signing the frontman in January - so it is ironic that it could prove to be their salvation.

Haaland is not the only Dortmund forward that Ole Gunnar Solskjaer has his eye on. The Red Devils are also in pole position to sign Jadon Sancho, who has racked up a remarkable 17 goals and 19 assists this campaign.

90min revealed all the way back in September that United were ​confident of securing a 2020 deal for the 20-year-old and Sancho's close ​personal friend Marcus Rashford could play a key role in convincing him to move to Old Trafford.