Roma 3-0 Barcelona is part of 90min's 20 Greatest Matches of the Decade series. Follow the rest of the series over the course of the next few weeks.

"Beyond reason. Beyond Roman reality, and in the end, beyond even Barcelona," (Peter Drury, 2018).

On 10 April 2018, Barcelona travelled to Rome with one-and-a-half feet in the Champions League semi-final, in what should have been a run of the mill second-leg success for Ernesto Valverde's side.

What unfolded, however, was one of the greatest comebacks in Champions League history, as Eusebio Di Francesco's men pulled off the shock of the decade, beating their visitors 3-0 at the Stadio Olimpico and ending Barcelona's dreams of European glory.

90min takes a look back at one of the greatest matches of the last decade which one writer was lucky enough to witness in the flesh.

​In order to truly understand the magnitude of the task facing I Giallorossi, we must first take a trip further down memory lane, to the first leg between the two sides. Roma travelled to Camp Nou for a Champions League quarter-final after edging past Shakhtar Donetsk in the previous round.

The visitors' game plan was obvious: stay in the tie. Roma defended resolutely for large parts of the match, but it turned out to be a night in which everything that could possibly go wrong, did so. Roma's task waiting for them at the Stadio Olimpico was one of the toughest you can face in a two-legged tie: chasing three goals, with the caveat that conceding just one will put the game almost out of reach. Not to mention that you're facing a team who always scores. A team who will soon be crowned champions of Spain. A team who possesses ​Lionel Messi.

The Stadio Olimpico was at full capacity, although confidence and expectancy were running on empty. But with the statue of La Madonnina di Monte Mario watching over the Romanisti's church, there was always hope.

The second leg started in much the same fashion as the first ended, with Barcelona creating an excellent opportunity, only for Sergi Roberto to fire straight at Alisson. With the warning shots fired, Roma suddenly woke up, and their Camp Nou hero came to the fore once again.

Six minutes into the contest, a long ball over the top of the Barça defence caused a surprising number of problems, and Dzeko latched onto the pass, outmuscled Samuel Umtiti and toe-poked the ball beyond Marc-André ter Stegen with a powerful prod.

The Olimpico erupted; all pessimism and trepidation was washed away in an instant, being replaced with a new-found energy. Not only was the timing of the strike so significant, but the manner in which La Blaugrana were bullied into conceding such a soft goal meant that Roma had unearthed a pressure point which they could probe - and they did just that. were rattled by the goal, and a combination of Roma's wolfpack-esque ferocity with a raucous audience baying for blood left Europe's superstars with a touch of stage fright. The hosts dominated the first half with an authoritative air, and their constant hounding of

Needing only two goals and a clean sheet in the next 45 minutes, Roma were alive and kicking and suddenly the impossible seemed less unlikely. As the players returned to the field for the second half, the visible difference in mentality between the two sides was staggering.

Dzeko, who caused Piqué and Umtiti endless problems over the two legs, used some classic number nine forward-play to hold off the challenge of his Spanish marker, roll him with ease to face goalwards and leave his defender with little option other than to pull, drag and kick the Bosnian to the floor.

The referee remained unmoved. Romanisti, commentators and pundits alike were left speechless at the official's decision, but the collective confusion and rage lasted only a matter of seconds, as the man with the whistle pointed to the spot. 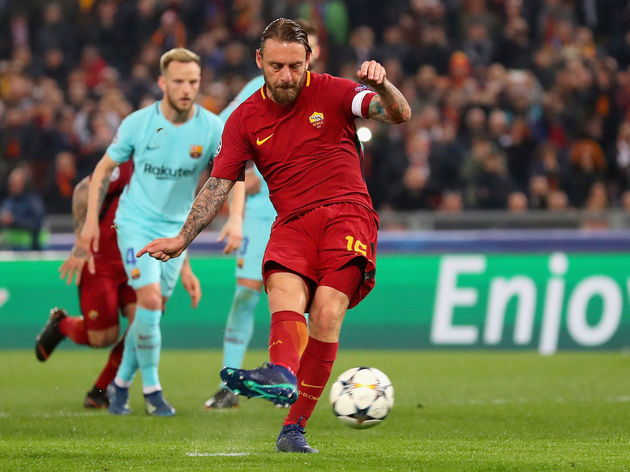 Childhood Roma fan, captain and club legend De Rossi placed the ball down, stepped back, took a series of deep breaths and then swept the ball to his right-hand side. The entire stadium held its breath as Ter Stegen dived the correct way, and the only sound to be heard was that of ball meeting fingertips.

But the net rippled. The penalty was struck too forcefully for the German shot-stopper however, and the decibels increased another notch around Rome.

Half an hour was left on the clock, and Barcelona were on the ropes, begging for mercy. Unfortunately for the away side, Radja Nainggolan, Kevin Strootman and De Rossi were not willing to take any prisoners.

Roma continued to push, and Ter Stegen pulled off a smart save to deny a snap-shot volley by Nainggolan, and then produced a stunning stop to keep out 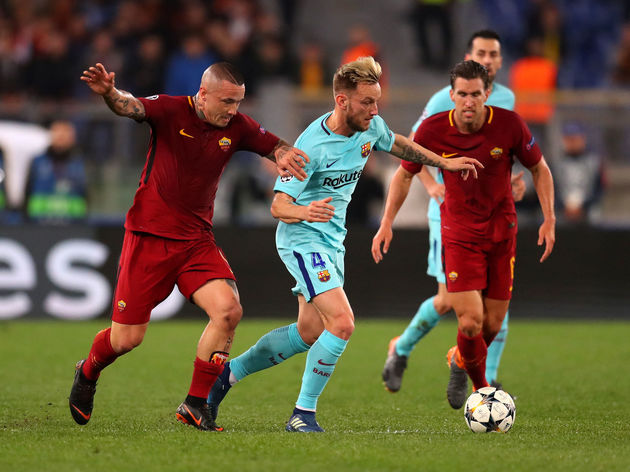 Time was ticking for the hosts, but with 81 minutes on the clock, the once impossible, and now almost inevitable, happened.

A corner from the right flank. An in-swinger. Cengiz Under whips the ball into the front post. From nowhere, Manolas darts in and flicks the ball towards the bottom corner. As the ball leaves the Greek centre-back's head, the whole of Rome stops. It freezes in time, the ball travelling in slow-motion as both defenders and goalkeeper stop, and watch the ball float into the bottom corner.

A pause. Then, pandemonium.

​Manolas charged towards the bench, eyes bulging and arms beating his chest furiously with pride, before being swarmed and swallowed up by teammates and playing staff on the touchline. To say the place erupted would be a disservice to the loyal and disbelieving supporters in that old stadium. The Curva Sud produced scenes we're as unlikely to see again as what was unfolding before them. I believe the youth of today describe it as 'limbs' - but Serie A style.

The next eight minutes plus stoppage time became almost irrelevant. Barcelona's fate was sealed and there was nothing they could do about it. That was the overriding emotion, anyway. Valverde's men had chances, Messi miscuing a difficult volley and Ousmane Dembele lobbing the ball onto the roof of an empty net, but it was destined to miss the target.

The Catalan giants had talent in abundance, but their spirit had been zapped from their body, in a similar fashion to that of Hercules losing his powers in the classic Disney film, and as the immortal, glowing colour drains, all that is left is a vulnerable and confused human shell.

AS Roma's match-winner Kostas Manolas in tears after knocking Barcelona out, during the singing of “Grazie Roma.” #TheBeautifulGame pic.twitter.com/jg5jLMu3iz

As the final whistle blew, Roma's heroes dropped to their knees, embraced one another and celebrated a performance of a life-time. Manolas slumped into the Roma dugout, wiping streaming tears from his eyes whilst 'Grazie Roma' rang around the stadium, overwhelmed with emotion.

It meant so much to the people and the city of Rome. For De Rossi, who had suffered so many humiliating defeats in Europe against the likes of Bayern Munich and Manchester United, it was redemption and success at last.

Will and spirit had overcome talent and natural order.

Roma would later fall to finalists ​Liverpool in the semi-final, but their story on that unthinkable night in Rome will live on, especially for those fortunate enough to witness it.