Barcelona 6-1 Paris Saint-Germain is part of 90min's 20 Greatest Matches of the Decade series. Follow the rest of the series over the course of the next few weeks.

In a decade of dumbfounding Champions League comebacks, this is the one that remains the most mindbending. And this is why.

Of course, it's easy to say this in hindsight, but it's obvious from the second you revisit the occasion - there was something in the air night. A frisson of Spanish belief and French anxiety. This is perhaps to be 'expected' from an arena as caustic, as cacophonous as Camp Nou. From a fanbase as empowered with belief and success as Barca.

Sure, La Blaugrana had won already two Champions League titles in the decade and hadn't gone out in the last 16 since 2007, but they'd also had five fairly disparaging knockout defeats, in four of which they'd failed to win their home leg.

So, not exactly a Fortress, then.

And yet, on the night of March 8th, 2017, it was a Catalan Citadel. Albeit one that had to be on the constant attack. And this dichotomy is the main reason for the near-unrivalled wonder of this game. It should've been impossible.

Whereas other comebacks of similar ilk have been aided by the away-goal stipulations, Luis Enrique's side had no such score to their name. What they did have was a scintillating atmosphere to work with. And boy did they capitalise on it quickly. Indeed, you could say that Luis Suarez's third-minute equaliser may have been the most important goal of the game. A tasty atmosphere is all well and good, but it is not impermeable. It is, by its very nature, prone to deflation.

But Suarez's opportunistic header, which came about through nothing more than some Parisian pandering in defence and the Uruguayan's archetypal ability to spot an inch and grab a mile, fully enforced that pre-match belief. It gave the crowd tangible evidence of a potential comeback.

They never had time to settle from the heady fantasies they had walking into the ground that night. And it invigorated every man, woman and child inside that arena who weren't cursing their luck before excusing their French, or not as the case may be.

And, after surviving an attack that was essentially sustained until the 10th minute, PSG were once again cursing their luck when Julian Draxler's cut-back struck the sliding arm of Javier Mascherano on its way to a corner.

This came just after Barca had had a speculative hand-ball shout of their own in the penalty box, and it's times like these when you have to consider the contrasting effect a whole stadium appealing in unison has as on the referee in comparison to whistles drowning out the up-in-arms requests of the visitors.

This was not the only such time such an issue would be raised. 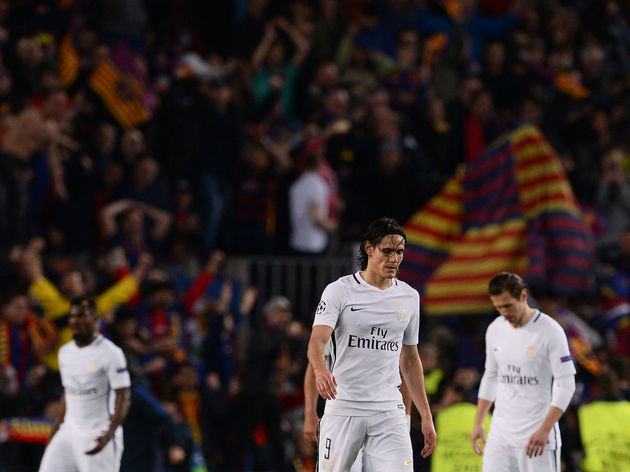 And it's the least Barcelona thing imaginable. Balls into the box. Loads of them. Specifically, balls coming from left to right. The home side absolutely peppered PSG with these kinds of balls from minute one. Some were whipped into the mixer, some floated, some were shots, some were an amalgamation of all three.

But they all served the same purpose - unnerving the centre backs and probing the space between them and Kevin Trapp in goal. The team the world was so used to seeing patiently probe were jumping at every opportunity to test their opponents at the back.

For the next half an hour, this is what PSG absorbed. They were camped, their midfield almost completely bypassed, with any opportunity at a counter wasted by snatched efforts at goal from the frontline.

And then Barca's speculative endeavours finally came off once more. In this instance, it was a perfect marriage of Catalan elan and the endless questioning of before, as Andres Iniesta badgered Marquinhos in the box before artfully playing a backheel across goal that a surprised Layvin Kurzawa could only bumble into the net with his attempted clearance. 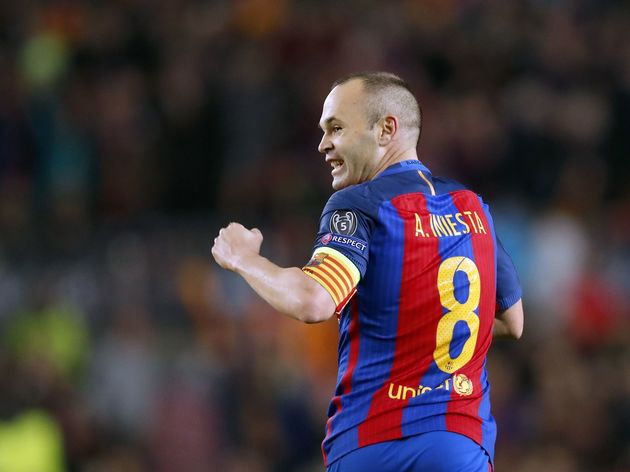 And this ascendancy allowed Barca to return to their passing roots in the opening stages of the second period, to equally great effect. Iniesta was once again the architect, playing Neymar in behind Thomas Meunier with a nonchalant flick, forcing the Belgian to, well, fall over himself in pursuit and take the Brazilian with his head for a penalty. Or did he?

The ref doesn't think so! But how? Hold on, the bloke who stands by the goal and has never had any impact on any football match ever has something to say! Penalty, he whispers, and his colleague issues the call.

Messi converts and the Catalans suddenly seem in control with another 40 minutes to go. But that's when you're most vulnerable in football, isn't it? IT IS!

First, a warning shot, as Meunier looked to make amends immediately with a bursting run and ball across the face that Cavani could only career into the post. Then, 10 minutes later, their increase in pressure paid off, Kurzawa plumping his head on a long ball into the box, providing Cavani with a chance that, this time, he dispatched with pure class.

3-1. And, more importantly, 5-3 in Paris' aggregate favour. The pin to pop the Barca balloon had arrived, and the air of defiance was rapidly leaving the team. But two minutes later it was handed some respite, as Cavani beat a feeble offside-trap to bear down on goal, only to be bettered by Marc-Andre Ter Stegen's boot. Life remained then, for now.

PSG submit FIVE-PAGE dossier to UEFA on the refereeing errors in their 6-1 defeat to Barcelona https://t.co/0dzxKMmXS4 pic.twitter.com/e4zRBd6Zjp

But the next 30 minutes or so could only be seen as the counting down of this life, as Barca huffed and puff and dived their way at PSG's door to no avail. The air was seeping out, time almost up.

And then, a lifeline from the grace of, nay God, but Neymar. A perfectly placed free-kick. Top corner. Trapp rooted. And, despite 88 minutes of time having elapsed, there were more/mar miracles to come.

Miracles might be a contentious word to use in conjunction with what happened in their next attack, but it's no less truthful. Messi plays another deft but distinctly route one ball up top and Suarez deigns to get on the end of it before crumbling at the daintiest of touches from Marquinhos.

Devious from the Uruguayan. Clumsy from the Brazilian. Clinical from his compatriot at the 12-yard spot. Neymar again. 5-1. 5-5.

The so-called weak link in this famous Barca side, handed a chance to rewrite the record books by a player, in Neymar, that was rewriting the script of this great side - of who this great side's most important player actually was.

Whatever or whoever the Brazilian was channelling in those final moments, it undoubtedly surpassed, even for a brief, bizarre moment, the conjuring efforts of Lionel Messi.

Another ball in, this one defter than all that had come before, met by a stretching leg that matched it in control. And, at a club that prides itself on being more than that by its very nature, by the very core of its being, that fairness was harnessed on this wondrous night. They took fairness to the brink, and administered their own justice.

And what justice it was.