Manchester City 3-2 Queens Park Rangers is part of 90min's 20 Greatest Matches of the Decade series. Follow the rest of the series over the course of the next few weeks.

​It's five minutes to five o'clock on 13 May 2012 and Manchester City's hopes of winning a first league title in almost half a century are in tatters - typical, typical City.

Just as they did during their relegation-confirming 1-0 defeat to Luton Town in 1983, the Sky Blues have collapsed at the critical moment. Much like their decision to see out a draw at home to Liverpool 13 years later - when victory was needed to survive - they've well and truly blown it. Let's rewind and go back 115 minutes to the time of kick-off against ​Queens Park Rangers on the final of the 2011/12 English top flight season.

With 37 games played, the ​Citizens are ahead of their tormentors ​Manchester United on goal-difference alone, knowing that a win over the strugglers at the Etihad Stadium will secure a maiden ​Premier League crown.

There's confetti littered across the pitch as Vincent Kompany leads his expensively-assembled side onto the playing surface under a glorious, beaming sun.

Not a single member of the home crowd can rest easy, given the erroneous history of their beloved team. The nerves won't fade until the referee blows for full-time and City have the win in the bag. No wonder the first half-hour is so stressful as the fear and angst seeps down from the stands. The hosts look like they need an intervention from lady luck, with QPR defending resiliently in a valiant bid to avoid the drop.

She willingly obliges in the closing stages of the opening 45, the breakthrough coming via the most unlikely of sources. Pablo Zabaleta - a cult hero, sitting on zero goals all season - bursts into the box and stabs an effort directly at visiting goalkeeper Paddy Kenny.

It's far from the most testing of attempts, yet the man between the sticks can only parry the Argentine's shot skyward, before desperately scrambling across the line as the ball bobbles back off the post.

It looks to have crossed the whitewash, but a hesitant City crowd can't be sure until Kenny claws the ball back towards the upright and into the side-netting.

Pandemonium. The Etihad is in raptures as an emotional Zaba celebrates with his adoring fans. 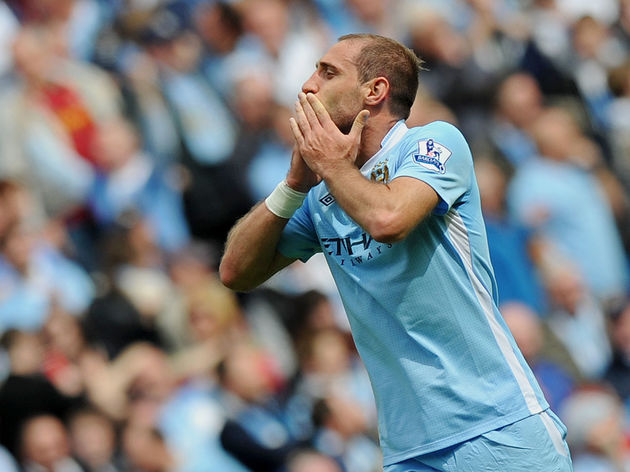 We reach the break with the Sky Blues' lead still intact. Roberto Mancini lecturing his recruits on their game-plan going into the second half, warning them not to take any unnecessary risks.

The England international tries to head the ball back to Joe Hart, but only finds Rangers hitman Djibril Cisse, who gallops away from the nearest defender and rifles in at the near-post. Oh s**t.

City's march to the top of the English game takes a hefty blow - they are falling apart and United are lapping it up as they hold on to a 1-0 advantage at ​Sunderland. Still, there's almost an entire half of football left to play; the title remains in the balance. Then, one of the Sky Blues' old boys does them an enormous favour, QPR's Joey Barton doing what he does best with a hat-trick of red card offences.

Mike Dean gives the City academy graduate his marching orders for an elbow to the face of Carlos Tevez. Just to make sure he has actually been sent off, Barton sends a knee into Sergio Aguero's thigh and jolts his forehead at Kompany's.

Relax. Stay calm. Keep plugging away, the gaps will start to appear and that second goal will come.

It most certainly does, but Mark Hughes hasn't read the script. Having been sacked as Citizens boss less than three years prior, the Welshman comes back to haunt his former employers on their big day. 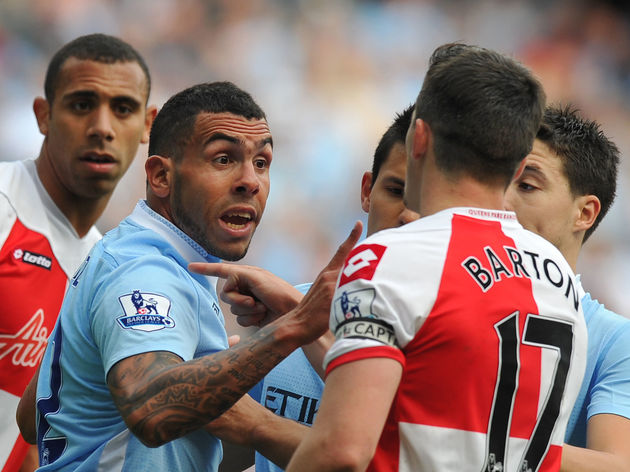 His side break upfield, with their opponents left bare at the back after swarming forward in numbers. The lightning pace of Armand Traore sees the defender venture deep into home territory, his inch-perfect cross being met by the unmarked Jamie Mackie.

Lescott can't get his head to it this time as the QPR winger nods into the ground and watches the ball bounce high into the roof of the net. Double oh s**t.

City need to regroup. They have to score two goals to win the league and dethrone their arch-rivals, and they have an extra man and 25 minutes plus stoppage time to do so. It's not over.

A flurry of chances come the way of Mancini's men. Kenny tips a floated header from Tevez over the bar. Mario Balotelli has a point-blank effort pushed away by the shot-stopper, who's making up for his error in the first-half. Edin Dzeko sweeps his shot ever-so-slightly wide of the upright. There's agony etched on the faces of those in the stands. There's grown men crying uncontrollably. There's shirtless QPR supporters having an absolute ball as their side near an improbable, season-defining, victory at the Etihad.

The clock ticks into the red and the fourth official reveals there is to be five additional minutes at the end of this gripping, horrifying, remarkable encounter. A glimmer of hope returns.

That glimmer grows greater as Dzeko rises highest to power a low, bullet header under the legs of Kenny. 74 seconds into overtime, the £27m Bosnian pays back all of his transfer fee and more with a priceless goal that gives City a fighting chance.

The Sky Blues have been resuscitated, but this match could still prove terminal.

Is this some cruel trick of fate? Are the footballing gods taunting the Citizens for the sake of a good laugh?

Or is this a prelude to their crowning moment? It doesn't seem that way when Samir Nasri foolishly allows the ball to trickle out of play, the Frenchman believing it would be City's throw-in.

The referee indicates that is, in fact, QPR's. A man in the crowd incessantly kicks the seat in front of him, unleashing 44 years of frustration on an inanimate object.

All of that rage and disappoint is forgotten within seconds. Hughes' side make no attempt to retain possession, hurling the ball straight to Lescott. He nods

If you start at the 90th minute of the May 2012 @ManCity v QPR match exactly at 11:56:40 PM on December 31st, you’ll have Martin Tyler scream Aguerrooooo! to you right as the clock hits midnight. Start off your new year right.  pic.twitter.com/l9t2QocXo1

I swear, you'll never see anything like this ever again.