Perhaps depressingly, there are DVDs and films about this World Cup QUALIFIER.

England travelled to Munich to face a Germany side boasting the likes of Oliver Kahn, Dietmar Hamann and Michael Ballack. England and Germany were in the same group for 2002 World Cup qualification, and only one could advance automatically. The other would enter the play-offs, where, famously, anything can happen. This was the second meeting in the group between these two - the other being that rainy night on 7 October 2000, when Kevin Keegan resigned as manager after full-time, England lost 1-0, and the old Wembley hosted an England match for the very last time.

Germany went into the match having lost just one of their last 60 qualification games - a decade later, England didn’t lose a single one between October 2009 and October 2019.

Recently-appointed successor to Kevin Keegan, Sven-Göran Eriksson, started Michael Owen and Emile Heskey up front, when Robbie Fowler and Andy Cole were expected to play ahead of them. 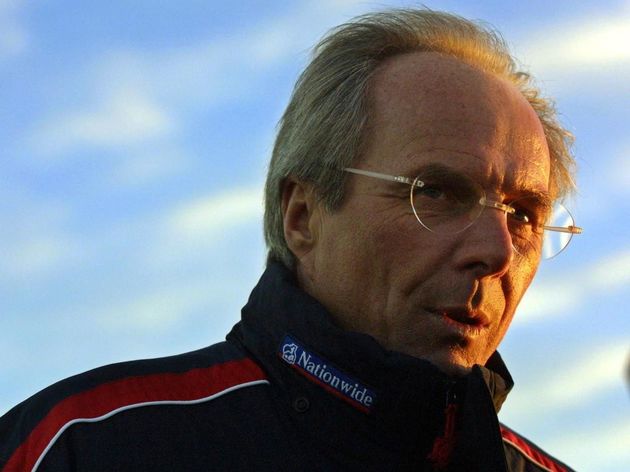 The night started slowly and poorly for England, who went behind when Carsten Jancker took advantage of a void in the Three Lions’ backline to stab past David Seaman and in. After just six minutes, England were already in trouble against their famous old foes.

They found themselves level just six minutes later though; Gary Neville headed a cleared free kick back into the melee precisely. Kahn came racing out to smother Nicky Barmby, but the ​Liverpool winger was quicker to the ball, knocking it down for Owen to convert into an empty net.

It was a FIFA goal, conceded in real life by none other than the Germans.

The game looked to be heading into the break level. Then, seemingly out of nowhere, Steven Gerrard thundered a volley through the bodies and into the far corner of Kahn’s goal. Fourth minute added on, England ahead. His first England goal in only his sixth cap.

Early after the restart, Heskey cushioned down David Beckham’s in-swinger beautifully. Owen, full of confidence after his first, volleyed the ball into the ground first time. Kahn made a desperate but horrendous attempt to stop it, and England were 3-1 up in Munich. 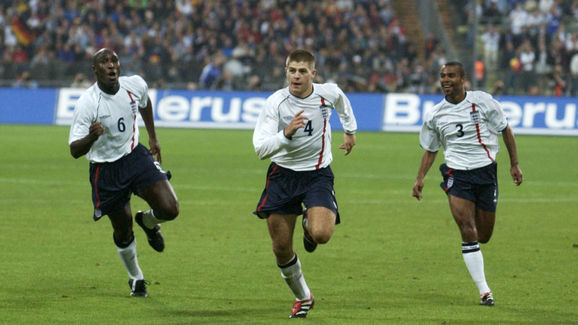 Eriksson’s side were toying with one of football’s greatest nations in their own back yard. Fans there and at home were absolutely lapping it up.

Owen ran at Germany and slammed the ball into the roof of the net for four.

Things were getting just a little bit ridiculous. He jogged away to celebrate, arrogantly summersaulting England into a 4-1 lead. It looked like something orchestrated by a leading film director, but there was nothing superficial about this. On 74 minutes, Beckham sent Paul Scholes free, Scholes sent Heskey even free-er , and the big no.9 slotted cutely past Kahn to send England fans from delirium into hilarity.

The phrase ‘Even Heskey Scored’ was born.

England had denied Germany's qualification hopes on the night, and the group would have to run on further into the autumn to find its automatic winner and its play-off side. This was a very rare day in German football — indeed, their first ever home defeat in a World Cup qualifier. Considering the first World Cup they entered came all the way back in 1934 shows just how impressive that record is.

For England romped to a classic smash-and-grab victory, condemning the hosts to one of the biggest defeats in their history.

Dear #motd Pls could you repeat the England v Germany 5-1 game as I was on a bad date that night and completely missed it! Thank youhttps://t.co/1TJSs6FPQ1

All in all, this wasn’t anything like the best era in Germany’s existence, but they would go far at the World Cup in Japan and South Korea nonetheless, losing to Brazil in a Ronaldo-dominated final. Absolutely none of the Germany team deserve a match rating of seven out of ten, but Jancker was about as good as they got. His goal required initiative and instinct in equal measure, and his performance throughout was less nervy and safe than many of his more off-colour teammates.

He would go on to make the Germany squad for the finals, scoring in the group stage against Saudi Arabia.

In competitive internationals, the Three Lions have a wretched record against leading world nations. Friendlies? No problem. Under tournament no-hoper Roy Hodgson alone, England beat Brazil, Germany, France and Italy in friendlies. The same could not and cannot be said about the side in matches that really matter though.

A victory over Argentina at the 2002 World Cup represented another rare win that really did feel good. But across the Italia ’90, Euro ’96 and Russia 2018 campaigns, the side only put one serious opposition to bed in normal time — the Netherlands, 4-1, at Euro ’96. This one felt oh-so sweet. It’s hard to know what more an England striker can do than score a competitive hat-trick against Germany.

A constant live wire for 90 minutes plus, Owen outwitted Kahn and his defence every time he took control of the ball, and was sharper, hungrier and better than everyone else on the pitch, with the possible exception of legendary Italian referee Pierluigi Collina.

Owen’s career might have been ten times better had injuries not plagued his progression throughout, but here he was at his electric best. 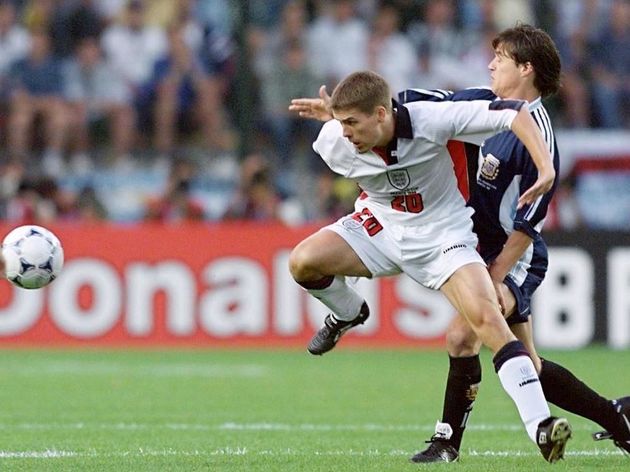 He wasn’t the most powerful nor the biggest nor the strongest, but his pace and balance made him unplayable for a number of top defences, including Germany’s here and against Argentina in 1998.

Gerrard’s Goal: Steven Gerrard notched his very first international goal, which would be a sign of things to come. He retired in 2014 with 21 England goals from 114 caps.

Clinical Counterattacking: England’s very best wins often come in games where possession is lacking but pace is not. Gareth Southgate’s side beat Spain in Seville in the 2018/19 Nations League in much the same way. England Winning: Germany would be condemned to the play-offs as England won the group on goal difference.

The Germany Kit: Die Mannschaft are responsible for some of the most iconic and sought-after football kits in history. The green away kits can be particularly memorable. Not this one. England Winning: Germany would reach the World Cup final, while England would fall to Ronaldinho’s cross-shot free kick in a quarter-final defeat to Brazil.

A St James’ Park win over Albania and then Beckham’s glorious stoppage-time free kick against Greece would condemn the Germans to the play-offs, where they of course progressed.

England and Germany both reached the knockout rounds, with England out in the quarters, and Germany losers in the final. More immediately though, the 5-1 result prompted a complete restructuring of German football. They went back to the drawing board and invested more into youth football. It paved the way for ​Mesut Özil, ​Manuel Neuer and Mario Götze much further down the line.

Germany haven’t lost to England in a competitive international since.

How did the hosts lose by four and still see 61% of possession? How did that team manage to get to the World Cup final?

How did this England generation not make a single tournament semi-final?

Why are there DVDs of this World Cup qualifier?