Atlético Madrid​ stunned Anfield with three goals in a thrilling 3-2 extra-time win and send holders Liverpool crashing out of the Champions League on Wednesday night.

In a dramatic turn of events, a brace from super-sub Marcos Llorente and a late Alvaro Morata strike clinched a remarkable 4-2 aggregate victory for Diego Simeone's side in their last 16 tie. 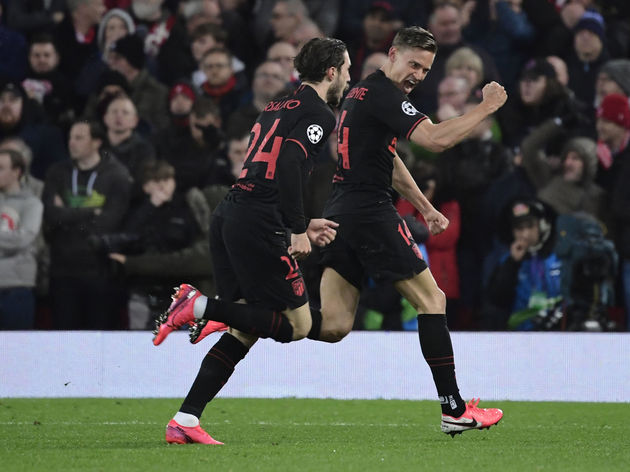 Gini Wijnaldum's header had forced the game into extra-time and Bobby Firmino had looked to have finally broken​ Atléti's resistance but Simeone's men conjured up a miraculous turnaround.

An inspired performance by Oblak kept the game alive before Andy Robertson headed against the bar from two yards out, then at the start of extra-time Firmino prodded Liverpool in front.

But with virtually their first attack since the first-half, Atletico capitalised on a poor Adrián clearance to swing the game in their favour as substitute Llorente silenced the Kop.

Llorente then bagged a quick-fire second as Atléti hit ​Liverpool on the counter before Morata added the final nail in the Reds coffin deep into the second period of extra-time. It makes you wonder had Alisson been in goal, would Liverpool's name now be in the hat for the next round?

Yes in Oblak they found a keeper on top of his game and they were guilty of poor finishing, but it was the man at the other end who ultimately cost them.

A lacklustre clearance was pounced upon by Atléti and punished in the most ruthless fashion by striker Llorente.

Liverpool's attacking play had been irresistible at times but it was all undone by a moment to forget for back-up keeper Adrían.

Football really can be cruel. A big game required a big performance and boy did Liverpool get one from the Ox in this game.

The Ox was at the heart of absolutely everything, exploiting the overload on Atletico's right time and time again - a masterstroke by Klopp but expertly executed by the midfielder.

But not for the curveball of Ox making 3rd man runs which Saúl has been unable to track.

Alex Oxlade-Chamberlain's best performance in an #LFC shirt since that Manchester City game in this competition two years ago. Provided an assist and was a constant menace to the Atletico backline throughout. Unlucky to come off, in my opinion.

Simply put, Simeone's men couldn't get to grips with the Englishman who was a real thorn in the La Liga outfit all evening - combining with Salah, he was a constant threat.

The 26-year-old played an integral part in the opener, storming down the right to serve the ball on a plate to Wijnaldum.

Every time Liverpool attacked, the Ox was involved, whether it be testing Oblak with long shots or feeding his teammates, he was absolutely everywhere...except the pitch in extra time when Liverpool collapsed... Anti-football, master of the dark arts, call it what you want but this will go down as one of the most extraordinary games of football in recent memory.

Atleti came with a game-plan, one which seemingly did not work for 90 minutes. The Spanish side found themselves under the cosh for the entire game, yet they are through to the quarter-finals.

Football never ceases to amaze and after one of the most one-sided matches you are likely to see, Atléti clung on and snatched it in extra-time courtesy of super-sub Llorente and Morata. It always looked like it would be a busy night for the man between the sticks, and so it proved to be.

He had to be at his best to keep his side in touching distance of the Reds and pulled off a number of stops to rescue his team on at least half-a-dozen occasions.

Gutting. Just highlights the importance of having a world class goalkeeper. Oblak has effectively won this tie for Atletico, while Adrian has lost it for us. Tough to take.

Whether it be a reaction save or an outstretched glove to tip away a long-range effort, the keeper stood up to practically everything that the Reds threw his way.

It was one of the great goalkeeping performances from Oblak, whose heroics gave his team a glimmer of hope which they fully capitalised on in extra-time.

Both sides return to league action this weekend, Liverpool look to take one step closer to the ​​Premier League​ title when they contest the Merseyside derby at Everton on Monday night.

While Atléti face a trip to Athletic Bilbao on Sunday with Diego Simeone's side in need of a win after two consecutive draws in ​La Liga.