7 Times Liverpool Have Got Really, Really Lucky This Season

​Liverpool came into Monday's clash with West Ham looking to restore their 22-point lead at the top of the Premier League.

They've been that good.

The Reds took an early lead through Georginio Wijnaldum and it appeared as though it would be a long evening for the Hammers, who were sat in the relegation zone coming into the game. However, David Moyes' men hit back straight away through Issa Diop before...taking the lead.

No one had seen it coming.

In the end, Jurgen Klopp's men were able to fight back and claim another three points. It is this desire to never give up that makes this team so special, but on this occasion, they have certainly been given a helping hand. Hammers goalkeeper Lukasz Fabianski was at fault for the first two goals, while he should also have done better with the third.

Make no mistake about it, this Liverpool team are absolutely phenomenal, all the stats back this up. But, as they say, even the best sides need some luck along the way, and in the Reds' case, they certainly have had their fair share of luck this season.

So with this in mind, we have decided to take a look back at seven times Liverpool have got really, really lucky this season... ​Liverpool came into their clash with newly-promoted ​Sheffield United in September having won their first six league games.

However, while Klopp's men were seeing a lot of the ball, they found the hosts quite hard to break down. The Blades looked resolute at the back and they posed a real threat going forward, but on-loan ​Manchester United shot-stopper Dean Henderson gifted the Reds the lead as he let Wijnaldum's tame effort spill through his grasp.

It was a moment to forget for the otherwise faultless goalkeeper. That goal proved to be the winner, although the Blades should have equalised late on through Leon Clarke. After the game, Klopp told ​Liverpool's official website that his side had scored a 'lucky' goal and admitted that he couldn't have complained if the game had ended in a draw. Just a few days later and Klopp's men were back in action, this time in the Champions League. And they were at their dazzling, sparkling, free-flowing best as they raced into a 3-0 lead against RB Salzburg.

They were making it look easy.

But just three minutes after the third goal went in, Hwang Hee-Chan made it 3-1 before Takumi Minamino, now, of course, a Red, made it 3-2. Game on.

And on 60 minutes, Erling Haaland, ​who is scoring goals for fun this season, netted to equalise. Anfield fell silent and rightly so, Liverpool had been stunned. However, they were able to take the lead with just over 20 minutes remaining through ​Mohamed Salah. He was able to fire in after a Salzburg man took a heavy touch, allowing Fabinho to poke the ball away.

They are the European champions and they may well be setting record, after record, but they can perhaps consider themselves fortunate to have not been punished for letting a three-goal lead slip. 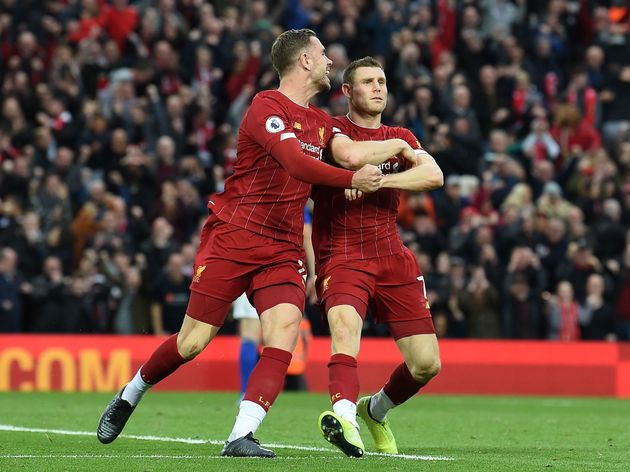 After overcoming Salzburg, the Reds returned to Anfield for their Premier League clash with Brendan Rodgers' ​Leicester.

In typical Liverpool fashion, they made a flying start to the game, with Trent Alexander-Arnold whipping in two sumptuous crosses that were simply crying out to be attacked. However, they soon did move into the lead through Sadio Mane, who raced onto an outstanding James Milner pass.

Klopp's men were unable to find a second to give themselves breathing room and they were punished as James Maddison struck with ten minutes remaining. Of course, the European champions pushed for a winner in the short time that was left, and they were given a golden opportunity.

It was hardly a moment of magic, however.

In fact, it was a communication breakdown between two Leicester players. Aston Villa carried a 1-0 lead going into the final ten minutes of their tussle with Klopp's Reds back in November, but somehow they found a way once again.

You can never, ever write this Liverpool team off.

But, they can consider themselves fortunate to have come away with all three points, not only because of the timings of the goals, but also due to the sheer number of chances they wasted.

Clear-cut opportunities weren't taken time and time again, but it took two pieces of individual brilliance from Mane to turn things around. First, he provided a sensational cross for Robertson to power home a header with three minutes remaining, which Tom Heaton failed to keep out. And then, in the 94th minute, Mane glanced in a header to seal the points.

Liverpool were nowhere near their best and they should have been made to rue their missed opportunities, but fortunately for them, they weren't. And in the end, they were rewarded for their determination and desire to fight until the last second. The Reds certainly weren't at their best as they travelled to take on ​Crystal Palace in November. James Tomkins thought he had given the hosts the lead late in the first half, but his goal was eventually ruled after Dejan Lovren went to ground from the slightest of pushes.

Instead, the Anfield side moved into the lead through Mane after the break. As the ball came into him, he controlled it before poking the ball left-footed towards goal. Vicente Guaita was able to get his fingertips to it, but unfortunately for him, the ball still hit the post before bouncing off the other post and into the goal.

Palace thought they had salvaged a point when Wilfried Zaha found the net with eight minutes remaining, but Roberto Firmino very quickly restored the Reds' lead with an impressively scruffy goal. As the ball came in from the corner, Virgil van Dijk prodded the ball towards goal and after a few ricochets, it fell into the path of Firmino who turned it in.

Well, they all count and in the end for Liverpool, it was yet another crucial three points. But, on another day, it could certainly have ended differently. The Liverpool youngsters have impressed each time they have been given an opportunity.

Shrewsbury had come from two 2-0 down to force a fourth-round replay in the FA Cup and with the first team squad enjoying their winter break, the youngsters were given another chance to shine.

They looked menacing each time they went forward, but it was the League One side that thought they had taken the lead. Shaun Whalley tapped in to spark wild celebrations from the away fans only for it be eventually ruled out for offside by VAR.

Reds youngster Neco Williams launched the ball up field, but Shrewsbury defender Ro-Shaun Williams looked in control. However, as he went to deal with it, he ended up nodding the ball over his goalkeeper's head and into his own net. Liverpool now face Chelsea in the next round of the FA Cup.

Oh, it also just so happened to be that Williams is a Manchester United academy graduate... Despite ​West Ham's...well, woeful form, Fabianski has continued to be a shining light for the side (when fit), making countless saves to keep his team in matches.

However, he had a nightmare evening on Monday as he gifted the Reds all three points.

Liverpool had taken the lead through Wijnaldum, with Fabianski failing to parry his simple header. But somehow, against all the odds, West Ham soon found themselves 2-1 up after Issa Diop and Pablo Fornals netted to give them the lead.

Was a shock on the cards? Were the relegation-threatened Hammers going to be the first team to defeat Liverpool in the league this season?

Klopp's men piled on the pressure as they searched for an equaliser and it appeared as though they would get one when Robertson's low cross found Salah, but he tamely fired straight at Fabianski. It simply should have been dealt with, but the shot-stopper let the ball slip through his grasp and his legs, dribbling over the line.

Two major errors, but he wasn't done there. This time, he raced out to stop Alexander-Arnold from crossing the ball, but he was unable to and, as a result, the goal was left completely bare for Mane to score.

Once again, it was a case of Liverpool's quality and resilience getting them over the line, but equally, it was another case of luck most certainly being on their side.