Athletic had two big opportunities to take the lead early on, but Marc-Andre ter Stegen denied Inaki Williams on both occasions. The first was a wonderful save from Williams' powerful long shot, before ter Stegen got down quickly to push away his shot from inside the box.

Barcelona could've taken the lead soon after when a woeful backpass fell straight to Luis Suarez, but the Uruguayan couldn't capitalise, as he turned and smacked the post before coming off injured moments later.

Chances were limited in the second half, with Ivan Rakitic blazing a golden opportunity over the bar and Antoine Griezmann missing a few headers. Athletic also had chances of their own, with Yeray Alvarez and Yuri coming close.

As the game looked to be ending goalless, Athletic snatched the three points in the 89th minute thanks to a stunning strike from Aritz Aduriz. The 38-year-old substitute got the ball on the edge of the box, and pulled off a spectacular bicycle kick to stun the visitors.

Athletic knew that they had a tough task when they were preparing to face the reigning champions, and produced a very strong first half performance – controlling the game and creating the better chances, though they were frustrated as they couldn't capitalise.

The visitors improved after the break, threatening the Athletic goal far more often. The hosts were nonetheless excellent and disciplined in defence, doing well to reduce the amount of attempts Barcelona had on goal.

Athletic really deserved the win, as they were the better side for the majority of the game and kept on fighting. A fantastic start to the season for the Basque club, who can go into the rest of the season full of confidence after beating the best team in the country. STAR MAN - Inaki Williams was excellent from start to finish, and played a huge role in Athletic's promising performance. He worked the hardest, ran the furthest and created all of the chances, and while he didn't score the winner he helped inspire Athletic to the win. ​​Ba​rcelona kicked off their league defence in Bilbao, after cruising to their 26th La Liga title last season. However, they were second best for the duration of the first half, struggling to keep up with the hosts and failing to really leave their mark on the game.

They came into the second half much improved, and played with more urgency and quality going forward. However they lost concentration right at the end and will be furious to have started the campaign with a defeat – however stunning the winner.

The result poses questions about what the season ahead holds for Barça, once again asking how much they rely on star man ​Lionel Messi. They must figure out why they lost on Friday night and fix those problems, in a concerning and frustrating opening to the season. STAR MAN - While he couldn't hold on for his first clean sheet of the season, ​Ter Stegen made a string of crucial saves for Barca. The German kept the visitors in the game for far longer than they should've been, though will be disappointed that he couldn't keep Aduriz's stunner out. Not because he should have saved it, but...well, he's a goalkeeper. When aren't they disappointed with goals they've conceded? 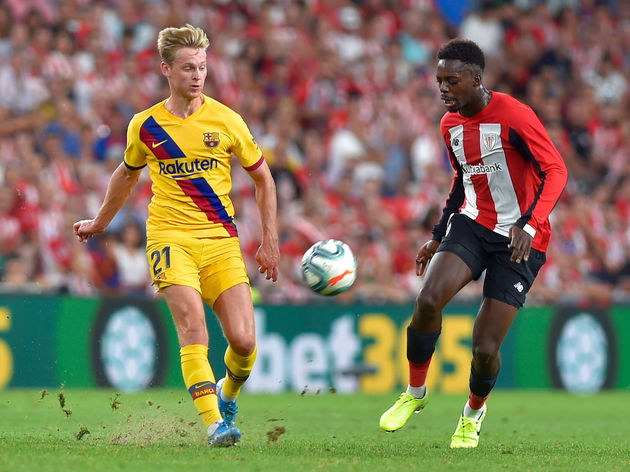 Athletic are on the road next to the capital, as they travel to Getafe next Saturday. Los Leones are then back at home for their first rivalry of the season, as they host Real Sociedad in the Basque derby on 30 August.

Barcelona have their first game at the Camp Nou next Sunday, as Real Betis are the visitors to Catalunya. The Blaugrana then take a trip across to Pamplona, as they visit Osasuna on 31 August.