Dortmund started the game slowly, enjoying plenty of possession but lacked a cutting edge in the final third as they failed to hit a shot on target in the first half hour. They improved as the half went on and made the breakthrough on the stroke of half-time. Marco Reus delivered a cross from the by-line which was pushed by Yann Sommer into the path of Jadon Sancho who blasted the ball in from close range. The goal was checked by VAR to see if the ball had gone out of play before Reus had delivered the cross but was adjudged to have been in play and the goal stood.

Dortmund made a quick start to the second half, keeping Not the ending we had in mind, but it's still a 5th-placed finish for the Foals! #DieFohlen #BMGBVB 0-2 pic.twitter.com/74X9Z53C62

His shot hit the crossbar in the first half a delivered an excellent cross for Nico Elvedi in the closing stages of the first 45 but the defender could only head the ball wide.

With his pace and trickery the winger posed a threat to Dortmund in the first half but was quiet in the second half as the home side tired.

While Dortmund capitalised on some poor defending from It was brilliant team goal that has been the hallmark of the Dortmund side this season. Dortmund played their way from the back through

STAR MAN - Scoring the first goal and being heavily involved in the second, it was yet another brilliant performance form the prodigiously talented Jadon Sancho. 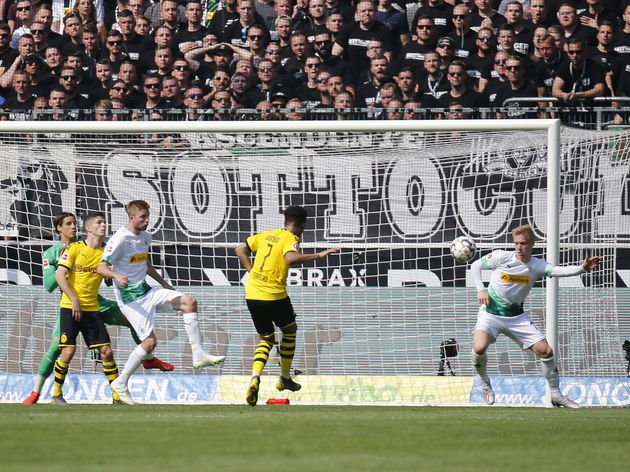 The youngster once again put in a performance of the highest quality, showing excellent pace, trickery and vision to help guide his side to a victory and give themselves a chance of winning the Bundesliga title.

He took his goal brilliantly, showing great composure to give Dortmund the lead whilst showing fantastic decision-making to help create the second goal.

The Englishman has been key to Der BVB's title challenge and they will hope to keep him at the club amidst strong speculation of interest in him from Premier League clubs.

They can look forward to European football next season and hope to bring in players in the transfer window to help them reach the top four next time round. ​Borussia Dortmund will hope to put their title disappointment behind them when begin their pre-season tour of the United States with a game against MLS side Seattle Sounders on 18 May.

After leading Bundesliga for large parts of the season this campaign, Der BVB will look back on this season as a missed opportunity.

With the transfer window open, they will hope to keep their promising young talents at the club and recruit more players to help them mount another title challenge next season.