​With it being Wednesday once more, all eyes are on FIFA's Team of the Week (TOTW) for gameweek 29.

The end of the international break last week meant that club football returned over the weekend, and with an opportunity for players to throw their hats into the ring with a great performance.

Whilst rather disappointingly there appear to be no 'superstar' name in this week's selection, there are a bunch of impressive additions that fit into the buzz words of the FIFA community; 'meta' and overpowered'. 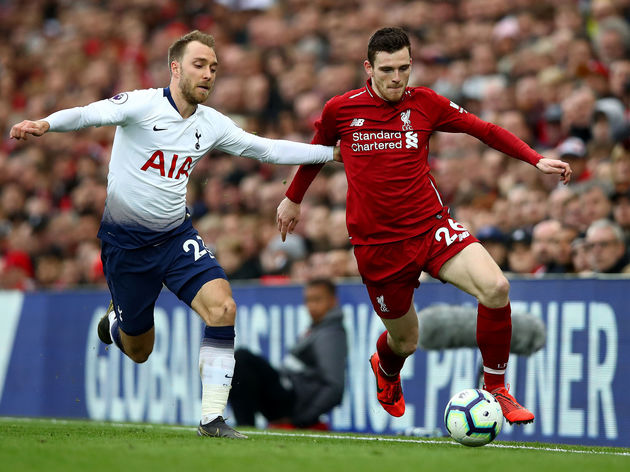 In a title-defining match, ​Liverpool managed to overcome Tottenham thanks to a late Toby Alderweireld goal. Despite the Reds being pegged back in the second half, and perhaps slightly fortuitous to end up picking up the win, it was Scotland left-back Andrew Robertson who picked up the man of the match award at the end. The former Hull star was superb all game, and it was his pin-point cross for Roberto Firmino that opened the scoring for Jurgen Klopp's side.

His 87 upgrade this week means it is his second in-form of the season, and with all 80 stats across his face card (except for shooting), Robertson represents one of the best left-back options at the game. His consistent performances this season should also mean he'll end up picking up a well-deserved team of the season card too. The highest-rated card this week, Marquinhos continues to outshine veteran teammate Thiago Silva; at least in the virtual world.

The centre-back was imperious in Paris Saint-Germain's 1-0 victory over Toulouse at the weekend, and in doing so earns his third in-form of the year. As FIFA fans will probably already know, the Brazilian also has a 'Headliners' card meaning anyone owning that item will automatically see their Marquinhos being upgraded. With 79 pace and 88 defending, the centre-back can still hang with the quickest the game has to offer.

Scoring the winner against ​Serie A rivals Inter, Milinkovic-Savic represents everything that FIFA fans love from a midfielder. At 6ft 3in, the Serbian international possesses that much-needed combo of four star skills and four star weak foot.

However with the FUT Birthday promo last week seeing him get an 89-rated right-back card and there already being a Europa League Live item that matches the 87 rating he's been given this week, the demand for Milinkovic-Savic may not be as great.

Best of the Rest As mentioned before, this TOTW may disappointingly be lacking in your household superstar names. But what it does make up for in, is the number of potentially 'overpowered' players available and the variety of leagues that they exist in. In La Liga, ​Atletico Madrid's Thomas Partey receives an 86-rated in-form card, which looks every bit of the box-to-box midfield option that might prove tempting.

With timed finesse shots well and truly nerfed, the new 'meta' is the old-school English football mentality of lumping it in the box and getting someone to head in at the back post. So with that in mind, EA have given us a couple of solid choices in RB Leipzig's Yussuf Poulsen who has the unbelievable trio of 88 pace, 88 physical and 87 shooting. Not one to be outdone however, Atalanta's Duvan Zapata - who also has a 'Headliners' card - has 83 pace, 89 shooting and 88 physical. Get those crosses in people.