Manchester United defender Diogo Dalot made his long awaited debut for the club in the Champions League against Young Boys on Wednesday night and could hardly have hoped for a better evening, as he impressed in the 3-0 victory.

Injury had initially forced £19m summer signing Dalot to wait for his debut, with manager Jose Mourinho seemingly keen to protect his fellow countryman as it was only after a month of training and two Under-23 games that he felt ready to hand the youngster an opportunity.

The United boss saw fit to leave captain Antonio Valencia out of the travelling squad to Switzerland after concerns over the impact the artificial pitch could have on his ageing knees.

Dalot was given the nod ahead of Ashley Young, dropped from left-back because of the returning Luke Shaw, and Matteo Darmian, whose continued presence at Old Trafford is a source of mystery.

And while the 19-year-old could have been overawed by the occasion, he simply wasn't and had arguably been United's best player before Paul Pogba stroked home the classy opening goal.

Dalot, who only made his senior debut for Porto last season and played 90 minutes of a 0-0 Champions League draw with Liverpool in the round of 16, defended well, showing maturity beyond his years. He slipped over at one key moment and was bailed out by a Chris Smalling block but he quickly put it behind him and it didn't appear to affect his confidence.

He also attacked with vigour, a prerequisite for the modern full-back, and there were several moments, particularly in the first half, when he surged forward into dangerous positions.

Afterwards, Dalot spoke to the club's in-house media with assurance and in excellent English, saying all the right things as he considered his performance and the occasion.

"Every player when he makes his debut, he wants to play. I wanted to play and my teammates helped me to be comfortable and under pressure, and that was good," he said.

"[Having many options at right-back] is good for the team. There is competition, that is what every player likes and my job is to give the coach a difficult decision [about who to pick]."

"It was Diogo's first match for the club after knee surgery. I think it was a solid performance - you could see his potential. He's a 19-year-old defender with more than 10 years to play for Manchester United," the manager commented.

It is too early to make a snap assessment over Dalot after only a single game, but he clearly has vast potential to become a great player. It may be that he now plays more and more over the coming months as loyal servant Valencia is slowly phased out. 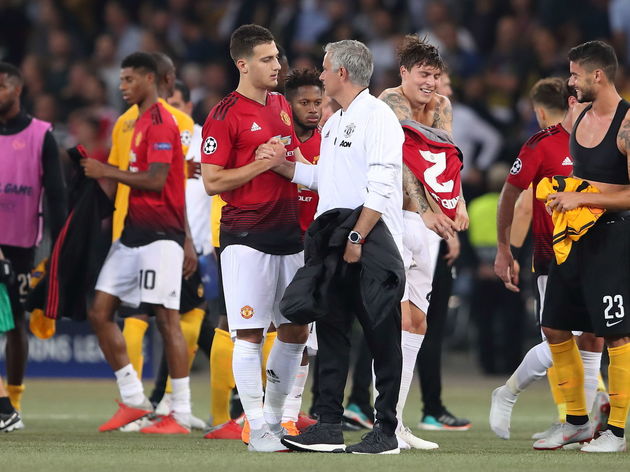