​Anthony Martial's creep towards the ​Manchester United exit door is gathering pace, as a report claims that the Red Devils will entertain offers for the 22-year-old forward this summer.

While United will listen to offers for Martial, they are keen for him not to go to a direct rival, ruling out a switch to known suitors ​Tottenham, ​Chelsea and ​Arsenal. 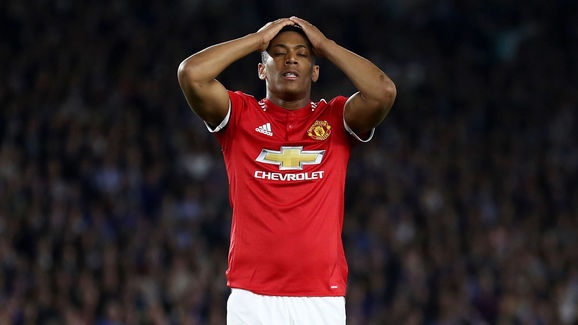 The report claims instead that clubs in Italy have been 'sounded out', with Napoli and - more likely - Juventus possible destinations for the former Monaco star, whose basic wage is understood to be around £65,000-a-week. It is not specified how much United want for their pacy star.

Martial's desire to jump ship at Old Trafford may have been expedited by ​his omission from the France squad for the World Cup this summer. The forward's stop start season and lack of impact for the Premier League runners up saw him dropped by Didier Deschamps at international level with the likes of Florian Thauvin and Nabil Fekir preferred.

Martial did score 11 times for United in 2017/18, but was often reduced to a substitute's role under Mourinho and his last league strike for the club came in January.

Just for goodness sake put a buyback clause in there for when Mourinho’s had enough of he job. https://t.co/Rg9OAxCibD

During the FA Cup final defeat to Chelsea, the Frenchman was introduced with little over 15 minutes remaining in the tie and failed to make an impact as United lost 1-0.

Meanwhile, one of the Blues' stars Willian is reportedly an attacking target for Mourinho this summer, as he looks to overhaul his already expensive squad for another tilt at the Premier League title in 2018/19.

​Reports claim United could hand Mouinho £250m to spend, while Martial could be joined on the way out by the likes of Luke Shaw, Eric Bailly and