​It's safe to say that Diego Costa and Antonio Conte are never going to be the best of friends. The pair haven't crossed paths in years, but Costa has clearly not forgotten about what happened, and he has now insisted that Conte doesn't have what it takes to be a top manager.

The duo combined to guide Chelsea to the 2016/17 Premier League title, but all was not well behind the scenes. Interest in Costa from Chinese side Tianjin Quanjian in January 2017 led to a falling out and saw the striker dropped from the team, and Conte eventually decided he had had enough of Costa that summer – and texted him to let him know he was no longer wanted. 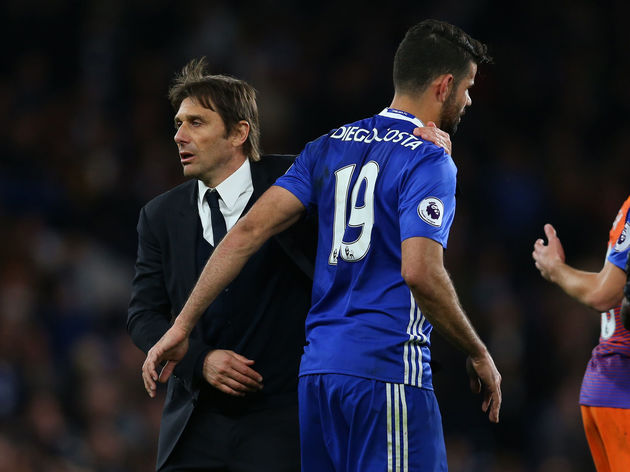 After months of drama, ​Costa was shipped of to ​Atlético Madrid, and Conte only lasted one more year at Stamford Bridge before being sacked. Speaking to ​ESPN Brazil, Costa insisted he had no hard feelings towards the boss, but still chose to take a dig at the Italian's style of management.

"We [Conte and I] had problems off the pitch, but I think he is a really good manager," Costa said. "I have no hard feelings towards Conte. But to be a top, top manager, he needs to change the human side of his management. He is very suspicious. At a team like, say, ​Real Madrid, he would never last a season." If you have ever seen Costa play, it should come as no surprise to learn that the Spaniard has never shied away from the opportunity to take a dig at Conte.

The boss was sacked in the summer of 2018 after seemingly losing the support of his squad as they fell to fifth in the ​Premier League, after which Costa told ​Marca that it felt like justice had been served.