While they've only been around for half a century, Paris Saint-Germain have worn an array of stunning kits. Their 49-year history has seen some superb kits on display in the French capital, including the iconic 'Hechter shirt' design that is still used today.

PSG's home​ kits have developed and adapted overtime, yet have always stayed loyal to three colours: the blue and red of Paris, and the white of Saint-Germain-en-Laye, all homages to the commune and city that is the home of the French giants.

In honour of Les Parisiens, 90min ranks the 10 greatest Paris Saint-Germain home kits of all time.

Almost all of PSG's home kits have been in the traditional shade of dark blue, but this is one of a few exceptions. In the early days of the club, PSG wore a predominantly red with a thick blue strip down the middle- a reverse of the kit we’ve come to know and love today.

The bright red shirt is complemented by the thin white stripes, including the three colours of the region and France itself. The club was sponsored by RTL in the 1970s, a French radio network based in Paris that still airs to this day. Bringing it forward to a more modern kit, and one of many classics made by Nike. PSG’s partnership with the American manufacturer began back in 1989, and in the 30 years since they have made some truly exceptional kits.

The 2011/12 home kit was one of many great Nike kits, with the thick red band in the middle of the shirt. The PSG badge and Nike tick both centred in the shirt was also a nice, and suits the overall look of this brilliant kit Nike took a modern spin on the PSG home kit three years later, making a very thin red-and-white stripe down the middle of the shirt. The plain blue collar and base of the shirt makes it a very simple design, yet one of the nicest PSG shirts in years.

This kit marked an incredibly successful season for the French giants, who won an unprecedented domestic quadruple. However, it was another year of European woes in the Champions League, as they exited at the quarter-finals to eventual winners Barcelona. One of PSG’s more unique home kits in the fact that it doesn’t follow the traditional look, but a beautiful one nonetheless. The red pinstripes look incredible on the dark blue background, giving the shirt a crisp and simple feel on and off the pitch.

Les Parisiens won their eighth Coupe de France that season, meeting Monaco in the final at the Stade de France. A tight final went to extra time, and was decided by Guillaume Hoarau’s 105th minute winner. 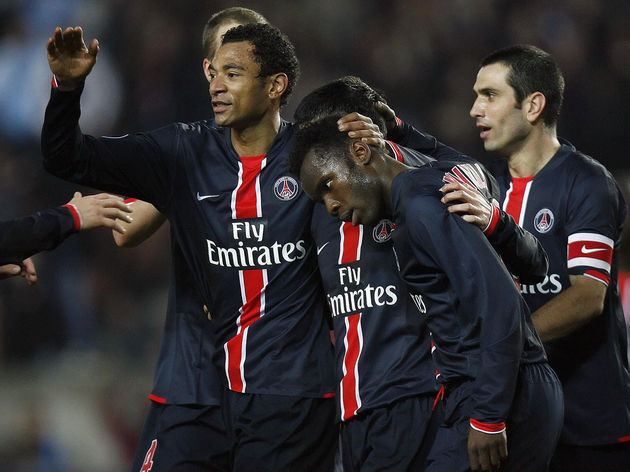 While it may be a kit that is fond in the memories of PSG fans due to its appearance, it doesn’t bring back memories of a good season.

Paris Saint-Germain found themselves languishing near the bottom of Ligue 1 in the 2006/07 season, finishing in 15th. They made it to the round of 16 in the UEFA Cup, but were knocked out with an 88th minute penalty by Portuguese giants Benfica. There are few PSG kits as synonymous with one player in particular, but the 2001/02 home kit brings memories flushing back of a certain Brazilian. Ronaldinho joined PSG in 2001 from Grêmio, leaving his native Brazil for the first time in his career.

This was the first kit he wore in his time in Paris, a nice dark blue kit with a smart collar to round it off. Ronaldinho went on to get 25 goals and 17 assists for the French club, winning the Intertoto Cup before leaving for Barcelona after two years.

The white collar looks stunning on the white shirt, making the two-coloured stripes truly stand out. It was the inspiration for this season’s incredible third kit, which marked 30 years of PSG’s partnership with Nike.

The third shirt is to celebrate 30 years of PSG and Nike and is based on the original home kit from 1989. pic.twitter.com/UhpXTuggJT It may be a surprise to see such a recent kit on this list of PSG’s best ever home kits, but last season’s effort was too good to ignore. The modern twist on the red sash looked glorious on the pitch, taking the Nike template and executing it to perfection.

The red looked brilliant on the blue kit, as the club wore it en route to their eighth and most recent Ligue 1 title. They also secured a record ninth Trophée des Champions, smashing Monaco 4-0 in Shenzhen, China.

This classic PSG home kit just misses out on number, but is definitely one of their finest ever shirts. It was the first ever version of PSG’s traditional kit look, with the red stripe on the blue background separated by thin white stripes.

The iconic design was created by French fashion designer Daniel Hechter, who became PSG’s president two years earlier. His famous shirt design has been dubbed the ‘Hechter shirt’, and the look is still the basis of every PSG shirt decades later.

Of all the PSG legends to have worn this shirt, Johan Cruyff is the most famous of them all. The Dutch legend was a fan of Hechter, and played two games for the Parisians in 1975 thanks to the club’s president and kit inspiration. For the greatest ever PSG home kit, we go back to the 1990s to Nike’s best effort. Everything is right about this kit: the classic Nike logo, the huge OPEL sponsor emblazoned across the front, not to mention the kit itself.

The Hechter design is absolutely perfect, due to its shade of blue and the thickness of the red stripe. Along with the red and blue collar at the top of the shirt, this kit is an absolute masterpiece and is definitely PSG’s finest home shirt.

The 1995/96 saw PSG win their first Trophée des Champions and their only Cup Winners’ Cup, beating Austrian side Rapid Wien. They marked this beautiful shirt with two trophies, which remains their best ever two-and-a-half decades on.