Very little has changed on Inter’s kit throughout the years, so much so that most football fans even think of them when they look at the tyre on a car (if you know what I mean).

One of Italy’s grandest clubs, with 18 ​Serie A titles to their name, and every single one of them was won in black and blue style.

There’s been some absolute peaches down the years, so without further ado, here’s 90min’s greatest ​Inter home kits of all time. Remember when Nike made kits with the Nike logo in the top corner and the club badge in the centre of the shirt? They produced some absolute belters, and this is one of them.

Inter secured their first Serie A title since 1989 in this little number. Admittedly it was by default as ​Juventus were stripped of the title following the match-fixing saga, but a fine year for Inter nonetheless. To many it seems like Nike have been sponsoring I Nerazzurri forever, but there was a time when Umbro produced the Italian giants’ kits, and they did a pretty decent job!

Like every football shirt from the 90s, the long sleeves and baggy v-neck collar is a throwback to simpler times, like when £5m would get you a world-class player.

Speaking of players, some pretty decent ones pulled on this shirt. Roberto Carlos, Paul Ince and Benito Carbone all played their first season at San Siro in this jersey. 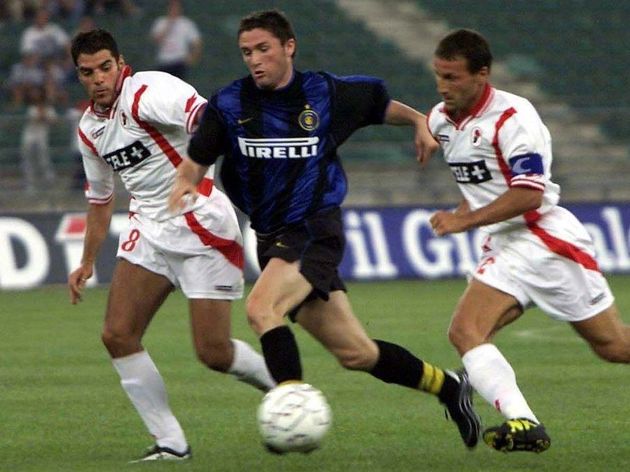 New millennium, same kit design. And why change something that’s not broken?

It’s probably a bit rich to brand this kit ‘the Robbie Keane kit’, given he made six league appearances in it and didn’t score a goal, but the move was highly publicised on these shores meaning it’s probably what most people in England think of when they see it.

The main reason for that is because Inter were absolutely rubbish that year. Fifth in Serie A, didn’t even get through the qualifying rounds of the Champions League, even old faithful the UEFA Cup let them down as they were dumped out in the round of 16. Inter got a bit too big for their boots after their Champions League win of 2010.

Pinstripes, darker shade of blue, wider stripes, black fading into blue, there was even an away shirt with a dragon on the side of it at one point! You name it, Inter tried it after 2010.

The 2015 kit saw them go back to what they do best. Multiple black and blue vertical stripes, Nike logo, Pirelli logo, Inter badge, done. During Inter’s decade of experiments with their home strip, 2016 was a particularly bold year.

For the first time in their 21 years of being sponsored by tyre company Pirelli (except for 2008 which we’ll come to), the Pirelli logo wasn’t white.

Instead they opted for a yellow logo, with a yellow Nike tick and yellow socks. It shouldn’t work, but it sort of did. Although there is something unnerving about seeing an Inter kit with so much bright colour. The club marked their 100th year in existence with a classic Inter design, but with a gold Pirelli logo and gold trimmings around the sleeves.

A golden kit lead to silverware as the club won Scudetto for the fourth consecutive season, and it’s hardly surprising when you consider the array of talent they had at their disposal.

A frontline of Zlatan Ibrahimović, Adriano, Hernan Crespo and Mario Balotelli will go some way to ensuring your trophy cabinet is well stocked. José Mourinho’s second year at the club, so of course they won the title.

A historic year for the club as they went on to secure the treble thanks to a Diego Milito brace in the Champions League final.

The no-frills design and crew-neck is a throwback to Inter shirts of old, and the nostalgia seemed to rub off on the players. Their success in Europe’s top competition was the club’s first since 1965. Incredible to think a club of Inter’s stature could go 45 years without European Cup success. It’s impossible not to think of this man when you see this kit. His first season in Italy, the Brazilian wonderkid would end the Serie A campaign with 25 goals in 32 games. Astonishing figures in the meanest league in the world.

This would be the club’s final year without Nike as their sponsor and it was certainly a special one, notching their third UEFA Cup of the decade as they brushed aside fellow Italian side Lazio in the final. A trademark Ronaldo goal - feinting before rounding the goalkeeper - would prove to be the icing on the cake on a special evening in Paris. You know you’ve got yourself a decent shirt when even the sponsor looks cool.

From 1992-1995 Inter were sponsored by Cesare Fiorucci, an Italian food company, and their logo helped produce some stylish kits.

The 90s was a barren time in terms of domestic silverware for Inter, failing to lift a single domestic trophy for a whole decade. They did however form a love affair with Europe’s secondary cup competition, being crowned UEFA Cup champions on three occasions in the 90s.

1993/94 would see them lift the second of those three UEFA Cups, with a young Dennis Bergkamp firing them to European glory. Black and blue stripes. One badge. One logo. One sponsor. None of these weird patterns or quirky designs.

Unfortunately, football is now a business and not a sport. There was a time when kits were made purely to distinguish who was who. Nowadays, most top tier teams have five different shirts, all of which have to be worn at least four times throughout the season.

We didn't realise how good we had it. Well, minus