You've read the ​list of potential right-back signings. Then, you skimmed through the ​collection of possible centre-backs. And you've just scanned the ​group of central midfielders who could arrive at Camp Nou.

But, let's be honest - this is the transfer target list Barcelona fans are most excited to read. The cluster of star forwards that could play for the Catalans next season.

Of course, it's not like La Blaugrana are lacking any current options up front. Not when you can call upon the reigning Ballon d'Or winner Lionel Messi, and his Uruguayan strike partner Luis Suárez.

But as for the rest - well, their status is a lot less certain. Antoine Griezmann has been fine, but he still appears to have an uncertain long-term future at the club. Meanwhile the club has been keen on selling Ousmane Dembélé for a while now, and as for Martin Braithwaite...who knows if he'll play at all?

So with that, here's the list of six forwards Barça could and should target when the transfer window does open... Heavily linked with the Catalans, Martínez would immediately be a key player for the team should he arrive this summer.

The ​Inter forward has been great since arriving to Italy in 2018, and has scored 17 times this season in all competitions. He's a maverick kind of player, in that he can produce something out of nothing, using his fantastic dribbling abilities and powerful shooting skills. And at 22 years old, the forward can still get better, particularly if he stops committing silly fouls.

However, finalising any deal to sign the Argentine will be difficult and could possibly take the whole summer. His release clause is currently set at €111m (£97m) and I Nerazzurri have demanded that the fee is paid out in full. In response, La Blaugrana ​appear unwilling to do so, which makes a cash-plus-player offer most likely.

But, with a ​source telling 90min that Martínez tops the Spanish champions' wish list this summer, you'd think that they'll do whatever they can to bring him over. It seems that every summer, Neymar is linked with a move back to Barça. This summer won't be any different.

Having nearly moved to Camp Nou last summer before negotiations broke down, the Paris Saint-Germain star looks certain to once again push for a return to the Catalans. And having retained close friendships with the likes of Messi, Gerard Piqué and Suárez, who ​recently signalled his approval for his potential return - a move would certainly be popular.

Like with Martínez, the issue with any transfer concerning the Brazilian will be the cost. A mammoth fee of €180m (£157m) has been requested, and it will be impossible for the Spanish champions to finance his transfer - they'll need to sell some players, or consider sending the likes of Griezmann or ​Nélson Semedo to Paris in exchange.

But given that PSG are unlikely to see a big-money offer any time soon, with the coronavirus pandemic affecting all football clubs financially, this could be La Blaugrana's best opportunity to bring back ​Neymar. Werner has had such a great season that Barça would be silly not to take an interest.

Leading RB Leipzig's ​Bundesliga title charge, he has 27 goals to his name for the 2019/20 campaign in all competitions, and would be versatile enough to play anywhere across the front three at Camp Nou. The forward's passing skills and clever movement would also be highly appreciated by both manager Quique Setién, and his potential teammates ​Messi and Suárez, in forming a deadly goalscoring trio.

Compared to the aforementioned duo, he would certainly be a much cheaper option to buy – and a player to build around for the long-term, given that he's only 24 years old. So if the Catalans were plotting plan B for the summer, Werner wouldn't be a bad option at all. 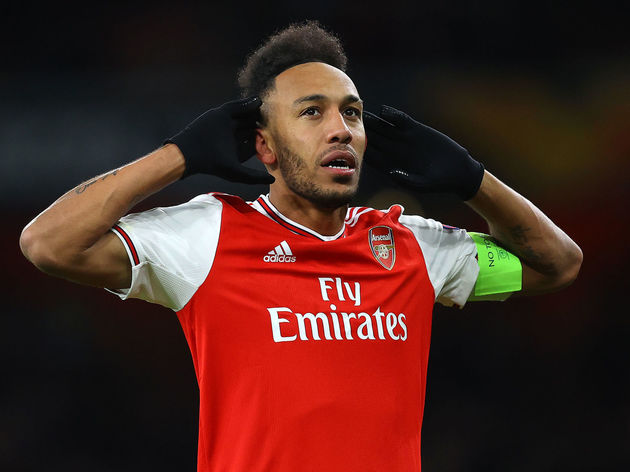 Like Thierry Henry did once, Aubameyang could be the next star ​Arsenal forward to swap the Emirates for Camp Nou.

The Gabonese captain has scored goals at every club he's played for in his career, and remains to be one of the finest finishers in the world. And with the Spanish champions at times this season looking toothless in front of goal, he would certainly add ruthlessness and precision that the team have been crying out for.

Yet given his age (30), his signing would feel like a short-term move by La Blaugrana. While he would certainly boost their position to contend for trophies in the next few seasons, it would mean the club would still have to look for their future star somewhere down the road.

But with Arsenal ​prepared to sell him given they don't seem willing to extend his contract beyond 2021, it could be the move the club needs to keep their stars and fans happy - for now. The next Valencia starlet to have emerged in ​La Liga, Torres would be a great fit under Setién's tutelage.

Playing predominantly on the right flank, the Spaniard is able to beat his man using his speed and dribbling skills, shown evidently in the fact that only Martin Ødegaard has completed more dribbles in the Spanish top-flight during this campaign among players under 21. As he's two-footed, he's equally adept at cutting inside on his left-foot, which causes chaos for opposing left-backs.

Though his release clause is at €100m, it should be noted that his deal currently is to expire in 2021, and so far Torres ​hasn't showed a desire to extend his time at Valencia. Consequently, Los Ches could be willing to accept offers for him, and Barça should try to finalise a deal before the likes of Borussia Dortmund and Juventus swoop in for the winger. Also just 20 years old, Isak has shown huge promise this season, and could become a world-class forward in the future.

Though he's only scored 14 goals this season for Real Sociedad, he's shown to have all the attributes that could help that tally increase in the years to come. His speed and dribbling on the break would mesh well with the Catalans' star South American duo, and he's become a more potent finisher since he departed ​Dortmund in 2019.

However, any offer for the Swedish starlet would have to be high, as La Real understandably rate him highly. His buyout clause is at €70m (£61m) and given he was only signed last summer, Sociedad will want to make a profit from the €30m (£26m) that they spent to buy him.

Yet if ​La Blaugrana want to find talent for the long-term, then they may just have to pay up for Isak, who looks to have what it takes to regularly stand out at the highest level.