​Finally, the tournament that we've been asking for at 90min for years.

No, seriously. Amalgamate the League Cup and the Checkatrade Nonsense Invitational Tournament into one EFL Cup – for Football League clubs only. It saves on the fixture congestion that the Premier League clubs are always whinging about, it means the Checkatrade doesn't exist, and it's proper competitive. It's perfect. Anyway. 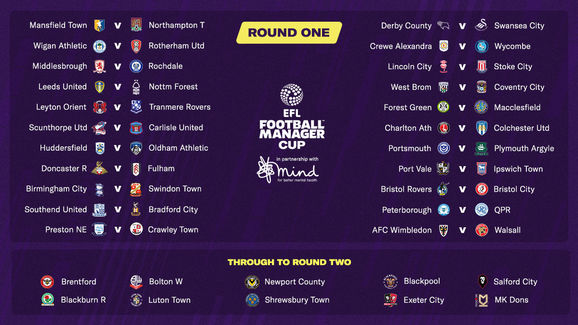 Representing the teams are a host of club figures, from AFC Wimbledon's Under-18s manager Rob Tuvey to a dozen players, including Karlan Grant, Joe Lolley (of course) and Romaine Sawyers – not the first time ​players have gotten involved in the virtual world over lockdown.

The first round was drawn on Twitter over the weekend and contains some titanic clashes, including Leeds vs Nottingham Forest, Swansea City vs Derby County and the first Bristol Derby in almost seven years.

First round games will be played out this week between Monday and Thursday, going at one round per week until the quarter-final stage – which will be played 11-14 May before both semi-finals on Saturday 16 May and the grand final on the Sunday.

Click here for all you need to know about the EFL Football Manager Cup 🏆 https://t.co/fN3MIEaIHQ

Highlights of each round will be uploaded on Football Manager's ​YouTube channel when they're completed, with full written roundups on their website.

The tournament is supporting Mind with a ​JustGiving fundraiser alongside the games, with the mental health charity's resources stretched in a trying time for the country as a whole.

As for Football Manager itself – it's available as ever on Steam for Windows and Mac, and we've put together ​some challenges to get you through The Inside Days. Or you could attempt the ​Cameron Jerome Rescue Operation...