The 10 Best Italian Forwards to Grace the Premier League - Ranked

The early days of the competition saw English clubs plundering Serie A for veterans who greatly accelerated the level of skill within the new, cash-rich competition, while the early 2000s saw several high-profile Italian talents flourish. Moise Kean, one of the most-heralded Italian starlets to set foot in England in recent years, however, could be offered an escape by Inter after just one season, with Tuttosport reporting that the Nerazzurri are willing to cough up around €25m for the young forward.

If Kean goes, he’ll be up there with the Dani Osvaldo's and Gabriele Ambrosetti's who couldn’t quite leave their mark on British shores despite their undoubted talents.

Here’s 90min’s list of the top ten Italian forwards to have played in England, who he might yet emulate if he stays put.

Two incredibly solid seasons and one gravity-defying bicycle kick mean that a short period of success was certainly sweet for the former Southampton man, who left the south coast for Shandong Luneng in 2016.

We all remember Simone Zaza’s famous missed spot-kick, but Pellè also had an equally ignominious role in the climax of Germany vs Italy at Euro 2016 (a.k.a. The Funniest Penalty Shoot-Out Ever), gesturing to Manuel Neuer that he was going to chip him before having a tame effort saved. Where do you start with a man who could light up a Manchester Derby 24 hours after lighting up his bathroom with fireworks? Whose one assist is probably the most memorable in Premier League history?

Controversial suggestion – Balotelli might be the most talented player on this list, but between attempting to chill in his local a women's prison, an infamous attempted backheel against LA Galaxy and many, many other incidents (real or myth), the Golden Boy award winner of 2010 always seemed like an entertainer first and a footballer second. He also was one of a number of player-managers to trot out in the Premier League at the turn of the century, a role that you just don’t see enough nowadays (for entirely sensible reasons, probably).

"The heart and soul of a football club" ♥️

The Big Mac was not as consistent as some of the names here during his time at Middlesbrough, but his occasional goalscoring (Mc)flurries happened to be amongst the most important in club history.

Maccarone managed back-to-back last-minute winners against Basel and Steaua Bucharest in the quarter-final and semi-final of the 2006 UEFA Cup as Boro pulled off a succession of great escapes, and will remain a figure in Teesside folklore despite some middling Premier League returns. His suggestion that he struggled to acclimatise to the Wednesday dressing room because he was teetotal really distils the essence of the early days of the Barclays, and suggests that an injection of Italian professionalism probably gave it a much-needed helping hand. Eranio was a real coup for the Rams, a genuinely established international talent with a heap of titles to his name, while Baiano swapped a formidable strike partnership with Gabriel Batistuta at Fiorentina for a new life in Derbyshire.

It all paid off, with the two now firm cult heroes who will never struggle for a pint in the East Midlands. Ravanelli’s staggering 31 goals in all competitions during his first season at Middlesbrough, which took them to both domestic cup finals, couldn’t save his side from relegation, but his constant grumbling about the state of English football ("In soccer, you have to do more than run") probably didn’t help that much either. 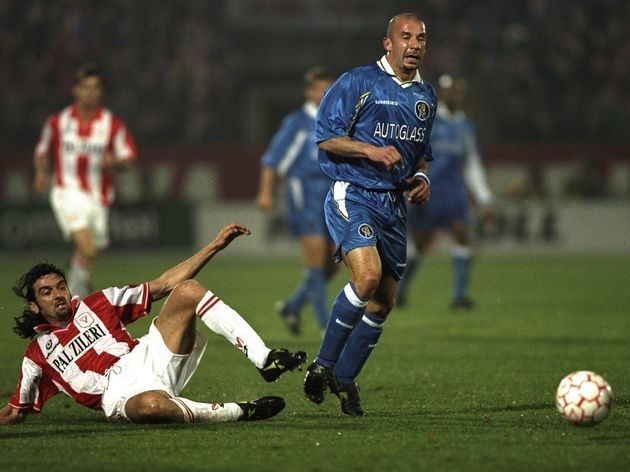 Once the most expensive player in the world, Vialli’s career was winding down by the time he got to Chelsea, where he retired. However, he certainly did not go gentle into that good night, scoring 40 goals (including three hat tricks) across three different seasons.

Like Lombardo, he combined boots and suits as player-manager, and had slightly more to show for it, winning five trophies with the Blues.

He has been back in the news of late having been given the all-clear in his battle against pancreatic cancer.

He was just as entertaining (if not successful) a manager as a player, memorably celebrating Sunderland’s 3-0 derby win over Newcastle like it was the World Cup final.

Before Chelsea had any history, there was this man.

The Italian playmaker had an uncanny ability to make defenders and goalkeepers look like absolute clowns, and you’d be happy to have scored just one of his best-ever goals.

There’ll be many more Italian players in the Premier League, but not many will come close to the player who provided the spark before Roman Abramovich was a household name.