​Maybe its the lack of football, or maybe its the mind-numbing boredom of lockdown, but us at 90min are beginning to feel a little nostalgic. And what we're mainly nostalgic for is mid-2000s Premier League football - when the league was at the peak of its powers. Plucked from obscurity by the transfer wheeler-dealer - and then Portsmouth manager - Harry Redknapp in 2003 after impressive performances in the Champions League for Israeli side Maccabi Haifa, Yakubu would go on to help his new club secure promotion to the top-flight.

It was then that the love affair between English football and the Nigerian began, as he became a fans' favourite not only at Pompey but for fans up and down the country.

While not the quickest, the forward's bulky frame combined with acute finishing prowess meant he was tailor-made for the English game. His 29 Premier League goals in two seasons for an often struggling Portsmouth side was testament to his finishing ability, as he helped save the side from relegation. 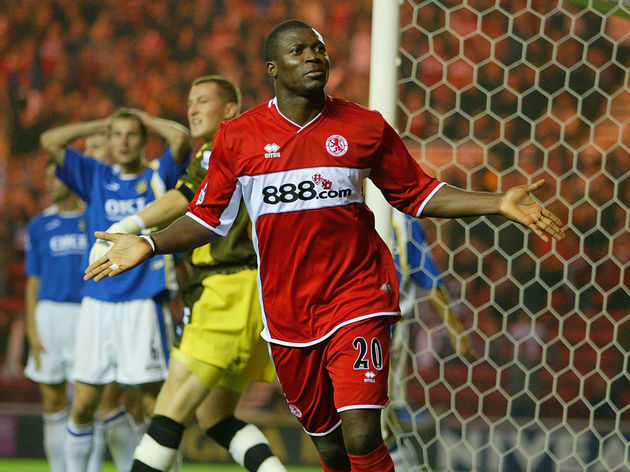 After a £7.5m move to ​Middlesbrough in 2005, the Yak forged a dynamic partnership with fellow cult Premier League legend Mark Viduka. Perhaps the memory of this two-man forward line is helped by the sheer lack of exciting forward partnerships today - no offence Ashley Barnes and Chris Wood - but there was something magical about watching the two big men at work.

The striking duo were integral to Boro's run to the UEFA Cup final where the Boro lost 4-0 to Sevilla - probably because our main man was on the bench.

After securing a big money move to ​Everton in 2007, the forward hit new heights under David Moyes. After requesting the number 22 shirt as a form of personal goals target - and a statement of intent - Yakubu hit 21 goals in all competitions in a brilliant first season on Merseyside. The sheer balls of the man to make such a public target and then near enough meet it. Quality.

At Goodison Park, the Yak had perhaps his best remembered spell alongside a team littered with classic cult stars, such as Tim Cahill, Steven Pienaar, Leon Osman and Andy Johnson, as Moyes guided the club to UEFA Cup qualification.

But then came the injuries. And yet, despite his steep decline in latter day of his Toffees career, his move to ​Blackburn in 2011 reinvigorated the powerful striker. "