​Manchester United are among the most successful football clubs anywhere in the world.

The famous red, white and black colour combination is instantly recognisable and has been worn at one time or another by many legends of the game.

Each kit evokes powerful memories and any that has particular connection to trophy winning seasons or outstanding achievements will always be remembered fondly.

Taking it all the way back to the very beginnings, when United weren’t even known as United, to the original green and gold jerseys worn by Newton Heath in the 19th century.

Worn with either white and navy blue knickerbockers – the precursor to modern shorts –green and gold halves were the club’s home colour until 1892. It wasn’t until 1902 and the name change to ‘Manchester United’ that red shirts and white shorts as we know today came in.

Green and gold remains an important part of the club’s history and the look was resurrected in 1992 for an early Premier League third kit. The colours are also a symbol for fan protest.

In 1992 the club went for the Newton Heath home colours for a third shirt and the promotional picture was brilliant#MUFC pic.twitter.com/JstfKCoF8m Adidas used a two-tone red design for United’s 2016/17 home kit as a nod to Newton Heath’s green and gold halves. ‘Newton Heath’ even featured inside the neckline to pay tribute.

There was even a subtle nod to Manchester in the design, which featured a line of honeycomb-like hexagons down the centre of the shirt separating the different shades of red. The city has become increasingly known in pop culture for its association with worker bee symbology.

As on many of their designs around that time, adidas also changed up the trademark stripes, moving them from the shoulders and top of the sleeves to down the sides. It proved a welcome change to make things a little bit different – variety is the spice of life and all that. United had a number of very similar adidas home kits throughout the 1980s, often with only subtle or minor changes between each. The best of these came at the end of the decade, with a predominantly white V-neck, trademark adidas sleeve stripes and additional white patterning.

United won the FA Cup twice in the 1980s, keeping the club’s trophy haul ticking over even in the absence of league success, but this was specifically the kit in action during the 1989/90 season when Alex Ferguson won the FA Cup, his first silverware in England.

Adidas also drew inspiration from this kit when partnering up with United again in 2015. United’s first home kit of the Premier League era had major throwback vibes, with Umbro incorporating pull string collars as a nod to the very early days of English football. Newton Heath shirts had featured strings for around 15 years in the 19th century.

It was part of a theme that season alongside the aforementioned green and gold third kit.

On the pitch, this kit is attached to some important moments. It was worn as United won a first league title in 26 long years in 1992/93, before that first great Alex Ferguson stormed the league the following season and won a domestic double. United first adopted their instantly recognisable red shirts, white shorts, black socks look in 1908, but the club actually moved away from that for a period in the 1960s.

In the latter half of the decade, a United side featuring the club’s fabled trinity – Bobby Charlton, George Best and Denis Law – actually wore red shirts and white short with red socks.

It was a noticeable, albeit minor change, but that look, with the round-neck shirt, is attached to a period of great success and it evokes memories of peak Best most of all. The United kit launched by Umbro in 1994 and worn for the club’s second Premier League and FA Cup double season in 1995/96 featured a superimposed image of Old Trafford that makes it rather unique among all of the club’s kits throughout history.

This was a time when a lot of renovation work was done on the stadium, firstly converted to all-seater in the wake of the tragic Hillsborough disaster, and later to increase the capacity to 55,000 by 1995 to make it the biggest club stadium in England. Nike designers drew inspiration from Manchester’s industrial heritage when putting together the kit United wore for the 2012/13 season, which saw the Premier League trophy wrestled back from Manchester City for a 20th English league title overall.

The gingham pattern, which gave a nod to Manchester’s booming cotton mills where the fabric was manufactured on a huge scale in the Victorian age, was a subtle yet interesting way to change things up from having just a plain red shirt.

‘Forged in industry, striving for glory’, read the graphic on the inside of the neck. Collars were the fashion in football kit design for much of the 1930s, 1940s and into the early 1950s, but United adopted a new style with a collarless V-neck in 1956 as the Busby Babes era was taking off. It was a pure look and is synonymous with crucial period of club history.

This was the shirt that Duncan Edwards, Roger Byrne, Eddie Colman, Liam Whelan and others who lost their lives in the Munich air disaster in 1958 wore with such distinction.

At a time when football shirts usually only featured badges for cup finals or special occasions, United wore a badged version of this kit in the 1958 FA Cup final.

In 2008, United wore a commemorative version to mark the 50th anniversary of Munich. 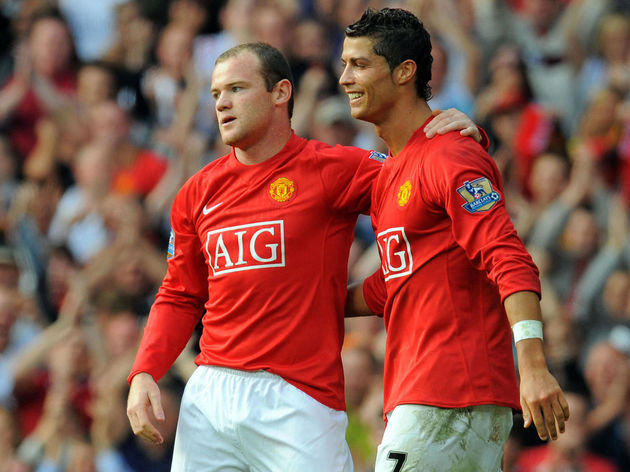 Those are instantly the three players that spring to mind when you see the home kit United wore for two seasons between 2007 and 2009, featuring a white stripe on the back and a plain red but subtlety detailed front.

It was a simple yet thoroughly modern look and the positive memories are certainly helped by what United achieved in the two seasons they wore this kit – two Premier League titles, Champions League glory, FIFA Club World Cup, League Cup, a Ballon d’Or and European Golden Shoe for Ronaldo, with other genuinely world class players throughout the team. United adopted a special home kit just for European games in 1997 and wore it in Champions League games for the next three years, including the 1998/99 treble season.

The red shirt with its white trim and embellished badge gave off an aura of class and sophistication. See this kit and you specifically think of Teddy Sheringham, Ole Gunnar Solskjaer, Camp Nou and the unbreakable spirit that United had that season more than ever.

The primary socks for the European home kit were white, which just felt a bit more special than the normal black socks used in domestic games.