Anatomy of a Goal: Gareth Bale's Iconic Sprint and Finish in the 2014 Copa del Rey Final

And there are players who are remembered for being just a little bit better than they really were, like his current manager Zinedine Zidane. Ok, maybe Zidane ​was fantastic, but you get the idea.

While Zidane was a world-class player and better than Bale, Wales' talisman has been criminally overlooked, underrated and frankly normalised in recent years. The things he has achieved have routinely been underplayed, when sometimes they have been out of this world.

The most alien of all was perhaps his cheetah-style solo goal against Barcelona in the dying embers of the 2014 Copa del Rey final. You know, the one where he ran at Usain Bolt-speed while everyone else was flagging at the end of their half marathons.

​Bale had been peerless in his final couple of seasons at ​Tottenham. He’d outgrown the club thanks to unrivalled consistency and quality and ​Real Madrid decided to make him the then-most expensive footballer ever. Weirdly, the 2013/14 season - his first in Madrid - is still as prolific as it’s got for the Welshman in seven years at the Bernabéu.

to score an 84th minute winner against Barcelona in the Copa Del Rey Final. ‍♂️ pic.twitter.com/cC83rv1Ucp

The Copa del Rey final had been a Clásico six times previously. Each side had won three each. So who would edge ahead 4-3?

There was no ​Cristiano Ronaldo, who was absent with a knee injury, so Real needed a leader in attack. Would a player in white take his place and grab the bull by its horns, or would ​Lionel Messi find third gear and tear the title away from Real?

Barcelona had been dominant from the first whistle, though Real went ahead against the run of play when Ángel Di María struck clinically on the counter. Marc Bartra’s header earned parity for the Catalans, but they were yet to take a deserved lead. With the clock at 85 minutes, Fábio Coentrão turned smartly out of close quarters with Messi and Jordi Alba, lining the ball to Bale. And after the match, Barça manager Tata Martino would admit that “it is difficult to see a player sprint like that at that stage of the game”.

Here's why he said that.

The pass from Coentrão was aimed somewhere between two players - his teammate Bale and Barcelona defender Bartra.

Bartra came rushing in to close the ball down, but in doing so was now front-on with the attacker, and essentially at Bale's mercy. Never go front-on as a defender, as the world houses attacking creatures as brutal and lightning quick as Bale. Bartra found that out the hard way. 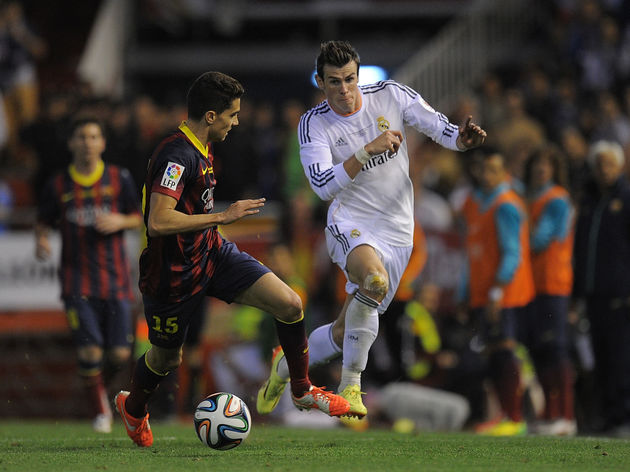 The former ​Southampton man fed the ball past Bartra and then left the pitch immediately, taking up the outside lane.

Bartra, as all professional (or professionally cheating) defenders do, sidestepped towards the sprinting Bale, hoping to crudely block him off or maybe even upend him.

It didn’t work. Bale kept on running. Wider and wider around Bartra he sped; faster and faster towards the ball.

Unsurprisingly, Bale got there first.

His first touch offered Bartra a glint of hope of prodding the ball away, but his second took the now-Real Betis man out of the equation. Bale ran dangerously close to goalkeeper José Manuel Pinto, but there was no problem: he knew what he was doing.

Pinto went to ground, but not without leaving the smallest of gaps between his legs. Bale found it, slotting the ball into the net and continuing his dash, but only to celebrate one of Spanish football’s greatest ever goals.

Before kick-off, the Welshman hadn’t won any silverware in his career. Now he had - in the purest sense of the word - and he had played a massive role in his club's success. Maybe this goal forged Bale a career at the most famous football club on earth. Or perhaps that was his ​Champions League final strike a month later. His stupendous overhead kick against Liverpool in the 2018 final wasn’t bad either.

But to view a goal that encapsulates everything that made, has made, and continues to make Bale such a rare and sought-after player would be to view this specific goal.

That fateful day in 2014 was the day a cheeky, unassuming Cardiff boy made sprinting footballers look like they were jogging. In turn, it was the birth abroad of one of Britain’s best ever exports.