How Would Bend It Like Beckham Look if it Was Made Today?

​Bend It Like Beckham is one of the most iconic football films to ever grace the screen. Gurinder Chadha's low budget project was a critical success, tackling sexism, racism and homophobia, and making stars of leading duo Parminder Nagra and Keira Knightley.

In the 18 years since Bend It Like Beckham was released, the landscape of the women's game has changed dramatically. Fixtures are shown on prime time terrestrial television, England boasts a fully professional women's league, and the Lionesses have reached the semi final stage at three consecutive major tournaments.

So how would Bend it Like Beckham look if it was made in 2020?

In 2002, Manchester United ​were one of the dominant forces in English football, with David Beckham fast becoming an icon for club and country.

With Beckham now retired, and ​United without a Premier League title since Sir Alex Ferguson retired, in the 2020 remake, protagonist Jess Bhamra would need a new idol to worship and a new team to support.

Following the same logic as the original (Beckham was an English talisman for one of the country's top teams), in 2020 Jess' hero would of course be Liverpool captain ​Jordan Henderson.

Pictures of the Mackem heart throb would dec her bedroom walls, and Jess would pour her heart out to Hendo about all her hopes and fears.

As a result, Jess would not be a silky winger, but a hard working central midfielder like her hero.

"Anyone can cook aloo gobi, but who can put in a shift like Jordan Henderson?"

​The film is originally set in Hounslow, London, and Jess and Jules play for Hounslow Harriers. However in 2020, the rising cost of London rent will have priced the Paxmans and the Bhamras out of the capital.

How are you getting your Sunday football fix? It’s Hounslow v QPR for me? pic.twitter.com/1dkU1OguX4

There are also an assortment of professional women's teams in London today, so Jess and Jules wouldn't have had to go to the States to pursue their ambitions of playing professionally, as they

Instead, the pair take the bus into Norwich and go to Sports Direct. Jess buys up a pair of adidas boots that were reduced by 70%, and also picks up a pack of five Slazenger socks for £3, because when in Rome and all that. 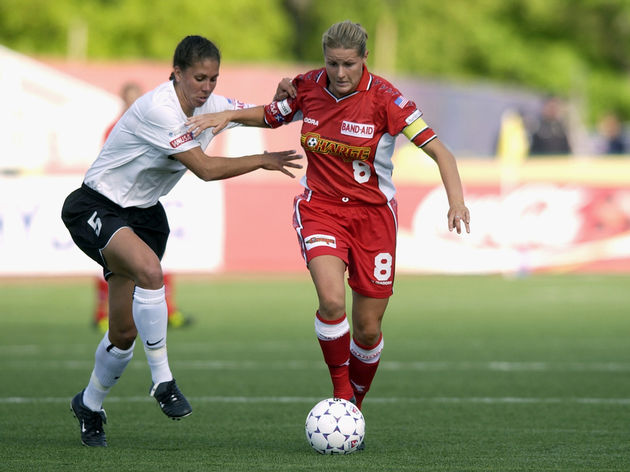 Jules digs out a VHS of highlights from WUSA - the fully professional women's soccer league in the United States. Kelly Smith and Mia Hamm both feature in the montage, and Jess and Jules watch on enviously, dreaming of one day being paid to play the beautiful game.

WUSA folded in 2003, and although the National Women's Soccer League was formed in 2009, in 2020 Jess and Jules can have ambitions much closer to home after the WSL kicked off in 2011.

In today's adaptation of the film, Jules will get the Women's Football Show up on BBC IPlayer.

⚽Coming up... Women's Football Show at 7pm BBCFour and 11.30pm BBCOne. All the goals from the weekend's #FASWL and @EilidhBarbour is joined by @Cymru women's manager Jayne Ludlow & Arsenal's @leahcwilliamson
⏯️https://t.co/ry9jjPxatJ #MakeItHappen pic.twitter.com/u2J7z3ujf0

Eilidh Barbour will make a cheeky cameo, and while Jules will be captivated by the goal scoring feats of Vivianne Miedema and Beth England, Jess will be inspired by midfield engines Jill Scott and Jordan Nobbs, as the Sunderland natives cover every blade of grass, just like her beloved Jordan Henderson.

Jess and Jules' friendship is put to the test when they both fall for their coach, Joe. Jules catches Jess and Joe on the brink of a kiss, calls Jess a bitch and storms off.

In 2020, Jules would report Joe to Great Yarmouth FC's human resources department. Joe would be suspended pending an HR investigation due to accusations of having inappropriate relations with a player. He sends number two Neil Critchley to take charge of the team for their crucial Norfolk Women's County Cup semi final against Bungay Town Ladies.

In the film, Jess' strict parents discover she has been lying about playing for a football team when they see the team's picture in the local paper.

In 2020, ​with print media on the decline and social media all the range, Jess would be caught out by a nosy aunt who grasses her up after seeing her tagged in a picture on Facebook.

Jess famously imitates her hero Beckham in the film's climax by bending home a free kick​ to win the cup for Hounslow - with a little bit of help from some questionable goalkeeping.

Just watching Bend it Like Beckham and wow the goalkeepers positioning for this free kick is so so so bad! A goal was inevitable pic.twitter.com/pIoF3YrFvH

The 2020 adaptation will have a slightly less dramatic finale. Jess will instead mirror her idol Jordan Henderson by completing a gut busting recovery run and neatly tidying up at the back.

Although the dream of earning a college scholarship in the USA is still very much a dream for many young female footballers in the UK, there are now alternatives in England and Scotland.

In the film, Jess and Jules are discovered by an American scout, who takes them to Santa Clara University in California. In today's adaptation, a WSL scout shows up to Great Yarmouth's Norfolk Women's County Cup final, and makes Jess and Jules' professional football dreams come true by offering them a one year deal at Birmingham City.