​Sound the sirens and prepare the celebratory feasts, because we've only gone and got an honest to goodness transfer rumour to work with.

Courtesy of those kind people over in the Greek media, it's said that Premier League trio ​Liverpool, ​Spurs and ​Leicester are all in the running for €25m-rated Olympiacos left back Kostas Tsimikas.

But who actually is 'Kostas Tsimikas'? Here's everything you need to know.

It's pronounced like 'sim-EEK-us', with the emphasis on the second syllable.

Martin Tyler will still be getting that wrong a decade into his Premier League career.

Tsimikas is quick, like seriously quick, ​and has gained more than a little attention this season for his impressive engine and work-rate down the left flank.

As for his creativity? This season, he has posted up broadly similar assist numbers (seven in 37 games) to the likes of Andy Robertson (seven in 41) and Ben Chilwell (four in 28), which gives you a vague idea of the type of attack-minded talent we're working with.

He can do it on the big stage, too - his overlapping run and cross for Youssef El Arabi's opening goal against Bayern Munich in the Champions League was a real thing of beauty, and might have put him on the European radar.

There Is a Lot of Interest

In addition to the aforementioned trio, Sheffield United and Rangers have been credited with a passing interest, but that's barely the tip of the iceberg. Italian giants Inter and Napoli are said to be among an eclectic who's who, with clubs from seven countries seemingly in the frame.

It's expected it will require a fee in the region of €25m for any of those clubs to pry him away, but that might only rise if Olympiacos sense a bidding war.

Look, He Has Two Squishy-Faced Dogs

​Instagram, where his posts are sometime accompanied by the hashtag #dogisgodspelledbackwards. Tsimikas might be seen as one of the most promising defensive talents to come out of Greece, but on the international stage, he currently finds himself losing the left-back battle to PAOK's Dimitrios Giannoulis.

Tsimikas broke into the team back in October 2018, but he has made just one appearance in the 13 since...in a 1-1 draw with Lichtenstein.

To be fair, Giannoulis isn't too bad either, and of a similar age. One to look at for whoever doesn't land Tsimikas? Not for me to say, but yes.

He's No Stranger to English Teams 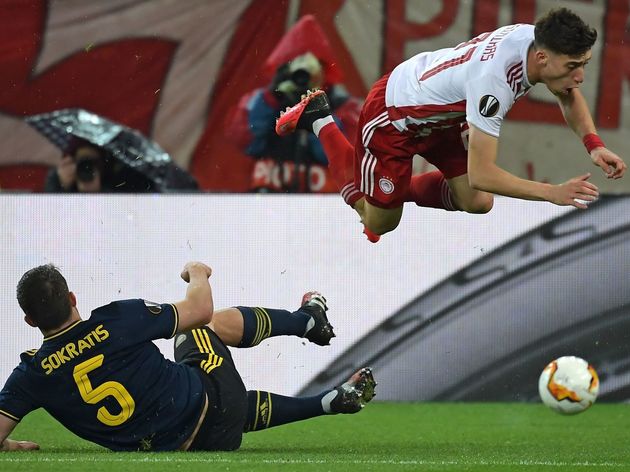 It's no wonder Sokratis saw it fit to kick him into touch.

This season alone, he's featured twice against Tottenham, and played an integral role in sending Arsenal home from the Europa League back in February. He also more than held his own against the blistering Adama Traore when Wolves came to town in the last-16 first leg, and has never looked a foot out of place against some of the UK's best.

He also kept Aaron Lennon quiet against Burnley in last season's Europa League qualifiers, which was a thing. Not a thing to boast about, but a thing nonetheless.