​There are a wealth of classic games that stand out in Newcastle United's 127-year history.

The Magpies have been involved in some cracking matches over the years, whether it be from their memorable times in Europe or some famous top flight victories against some of the finest teams in England.

With no live football to currently watch, here is 90min's choice of the best classic Newcastle games for Toon Army fans to rewatch. Newcastle hosted reigning ​Premier League champions ​Manchester United in October 1996, having been beaten to the previous title by four points. The Magpies were desperate for a dose of revenge, and that certainly came through in the final score.

Darren Peacock opened the scoring and the floodgates after 12 minutes, before David Ginola doubled their lead before the break with a stunning long shot. Second half strikes from Les Ferdinand, Alan Shearer and Philippe Albert wrapped up the emphatic win, and in some style.

It was Manchester United's heaviest ever Premier League defeat, and remains their joint worst to this day. Twenty-three years on, Newcastle vs ​Barcelona in the ​Champions League seems abnormal to modern day football. But back in 1997, Newcastle welcomed the former European champions to St. James' Park for a group stage clash.

The Magpies raced into a stunning 3-0 lead thanks to one Colombian striker. Faustino Asprilla first struck from the spot, before two towering headers either side of the break put Newcastle in control. Luis Enrique and Luis Figo's goals almost levelled it up, but the Toon saw out the win.

Incredibly, neither side made it out of the group, as Ukrainian champions Dynamo Kiev finished top of Group C. Asprilla went on to net 18 goals in 60 appearances for Newcastle, but he will always be remembered for his magical display under the European lights. Newcastle often found themselves in the UEFA Cup, and reached the quarter-final stage in 2004. They met Dutch club PSV Eindhoven in the final eight, and having drawn 1-1 in the first leg had the chance to reach the semi-finals on their own turf.

Alan Shearer put the Magpies ahead after just nine minutes, but they were drawn level again by Mateja Kezman and his second goal of the tie. Finally, after two and-a-half hours of nothing between the two, the late Gary Speed headed home the winner and sent Newcastle through to the semi-finals. 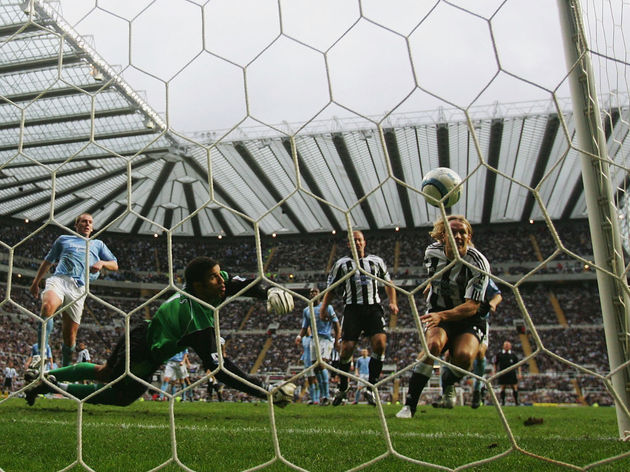 Back to the Premier League classics, and no Newcastle fan will forget their seven-goal thriller with ​Manchester City in October 2004.​ After a goalless first half, Laurent Robert and Shearer put the Toon in front, before City levelled it up thanks to Shaun Wright-Phillips and Robbie Fowler.

Robbie Elliott's header restored the Magpies' lead two minutes later, rounding off a crazy four goals in 12 minutes. Wright-Phillips' second of the afternoon made it 3-3, before an 89th minute winner from Craig Bellamy secured a crazy victory for Newcastle.

If Magpies fans are looking for entertainment, they should look no further than the seven goals in this clash. A remarkable goal-filled second half did the job for Newcastle, though they ended up finishing the 2004/05 season down in 14th. ​There had to be at least one edition of the Tyne-Wear derby on this list, and what better choice of game than halloween 2010. Newcastle absolutely demolished Sunderland at St. James' Park, with Kevin Nolan's hat trick inspiring the Magpies to derby day victory.

A brace from Shola Ameobi well and truly sealed the victory, with the hosts scoring five fantastic goals without reply. Darren Bent's late consolation was insignificant at the full-time whistle; a huge 5-1 victory over their arch rivals, one that resonates deeply a decade later. It's still constantly talked about​ nine years later, as one of the greatest modern comebacks in the English game. ​Arsenal showed that they meant business by racing into a 4-0 lead after 26 minutes, with Theo Walcott, Johan Djourou and Robin van Persie on the scoresheet.

Whatever then manager Alan Pardew said at half-time, it worked wonders even beyond his belief. Joey Barton's penalty kickstarted the comeback, Leon Best halved the deficit and another Barton spot kick brought the Magpies within a single goal of the Gunners. Surely they couldn't?

But they could. The ball came out perfectly to the late great Cheick Tiote, who struck the ball sweetly into the back of the net. Newcastle had made it 4-4, sending St. James' Park into absolute pandemonium. It's a game all Newcastle fans should rewatch; and all football fans, for that matter. In the final stages of the 2011/12 season, ​Chelsea and Newcastle were among those battling it out for the European spots. Their meeting at Stamford Bridge was a crucial one, and one that was settled by the brilliance of one man: Papiss Cisse.

First, Cisse flicked the ball up and, almost without hesitation, pummelled it into the top corner. With the win all but secured in the 94th minute and with Cisse on the sideline far from the goal, he curled it with the outside of his boot into the roof of the net to score an astonishing goal.

That second goal is one of the greatest goals ever scored in Premier League history, and that win was crucial in the Magpies' season. Newcastle finished one point and one place above Chelsea to qualify for the Europa League, with that night at Stamford Bridge one to remember.