The two clubs found themselves in an unusual situation going into the game as neither team topped the league table - Atletico Madrid had hit the summit a few weeks prior and remained there till the end, so this game had more riding on it than normal.

The pre-match talking points were dominated by the absence in the Madrid attack of ​Cristiano Ronaldo. This was predicted to be the difference as Barcelona were at full strength with the return of Xavi to their starting XI, and Gareth Bale not deemed good enough to replicate the sort of form Ronaldo was capable of in big games. Then the ref blew the whistle for kick-off. 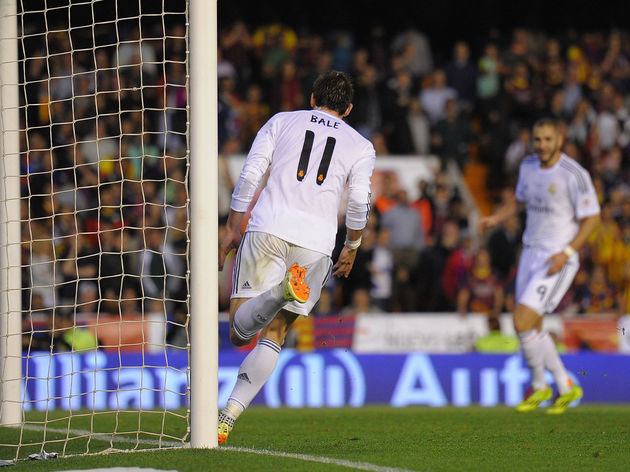 Unlike every prediction going into the match, Real Madrid dominated the game from the get-go, and ​Gareth Bale was playing like a man possessed. Everything went through the Welshman, as he and Angel di Maria gave the Barcelona defence no end of problems as the swapped flanks at will.

The two showed their class early on. Bale went close on two occasions in the opening 10 minutes, going just wide on both occasions, before some one touch football with Karim Benzema set Di Maria away through the middle. Just when the chance seemed lost as Jordi Alba made a recovery, Bale made an option across the box and Di Maria used this to drive the ball through Alba’s legs and beyond the reach of Pinto in the goal.

What followed was an hour of Real Madrid flexing their muscles, but struggling to score. Bale went through time and time again, even having a goal chalked out for offside, only to be denied by Pinto, while the best Barcelona could manage was a 20 yard snapshot by ​Messi. Then completely against the run of play, Xavi sent a corner in on 68 minutes and Marc Bartra put a free header past Iker Casillas, almost making up for the torrid game he’d been having up to that point.

Then up steps Bale. Real responded with more pressure, culminating in one of the finest individual goals you’re likely to see. With five minutes remaining, Bale received a pass and kicked it down field to chase after. He had the beating of Bartra who can only attempt to put him into the stands, but Bale was too strong and too quick. He ran a couple of yards into touch and back onto the field, powering into the box and poking the ball home. Xavi played the pass of the game in injury time to give Neymar a goal on a plate, but the Brazilian could only watch on as his shot hit the post, and the Copa del Rey was Real Madrid's once more. The 2013/14 season saw a turning point in the recent history of the Spanish giants, as a squad overhaul began in earnest during the season. The club failed to win the league by just three points, and also claimed the Copa del Rey and ​Champions League titles, but it was obvious that the European triumph was a last hurrah for the squad which had been assembled during Jose Mourinho’s time at the club.

The season marked the final major appearance for players such as Xabi Alonso, Di Maria and Mesut Ozil, while Casillas had only appeared in cup and European matches due to the form of Diego Lopez. On the flip, side it did mark the break through of players such as Raphael Varane, Casemiro and the true emergence of Luka Modric.

Of course, the biggest talking point was the performance of Bale, who lit up the proceedings from the beginning. He was electric and proved to the world that he could perform magic when his club really needed it - his winner was just insane. Who needs ​Ronaldo, eh?

If you don’t instantly know what this goal is then you don’t know ball. pic.twitter.com/sU5jVPu69i The previous summer, Gareth Bale became the world's most expensive footballer as he moved to ​Real Madrid from Tottenham for €100m.

Things kicked into place for him after a disappointing performance in his first Clasico, scoring his first hat trick for Madrid at the end of November. Bale continued to improve, but was still overshadowed by Ronaldo and the resurgent Di Maria.

But when they needed him most in the Portuguese's absence, Bale delivered. He ended the campaign with 22 goals, including one in the Champions League final victory over Atletico Madrid. Like Madrid, Barça were going through something of a transition. Unlike Madrid, they didn’t win a thing in the 2013/14 season. Their performance in this final was a particularly toothless one, with Neymar’s stoppage time shot their only clear sight of goal.

The lack of urgency in front of goal was something that came back to bite Barcelona several times that season, but it was no more apparent than against Madrid.

Their top scorers that season were Messi, ​Alexis Sanchez and Pedro - the latter two didn’t start in the final, and Messi had an off day, which proved to be the difference in the tie. Barcelona’s best player on the day, Xavi was the only player who looked likely to turn the tide in their favour.

The playmaker oozed class on every occasion that Barcelona were in possession, and it was his corner to Marc Bartra that led to their equaliser. He also played one of the passes of the season to Neymar right at the end of the game, a deft ball that found the yard-wide corridor of space to cut through nine bodies and put the Brazilian through. Not a lot has aged poorly since this game, but on reflection, you'd have thought Bale would be adored by Madrid fans considering all he's done since. Instead, he's seen a waste of potential who's more interested in improving his golf handicap.

The Spanish press after the game was touting the Welshman to become Los Blancos' next icon, but after a string of injuries and fall outs, he's always having to prove himself to the Real faithful. Even his famous match-winning performance against Liverpool was greeted with a feeling of 'it's about time he turned up again' rather than acknowledging just how good he actually is.

With his time in Spain constantly scrutinised, and the everlasting feeling that his day's are numbered, Bale's time at Real Madrid will always be remembered for him never being quite as good as he could have been, rather than talking about the immense success he actually had. Real’s squad for the game also included Isco, Carvajal, Varane and Casemiro, all during their first full seasons in the senior squad. Those four players went on to be vital parts of the Madrid squad that won three consecutive Champions League trophies between 2016 and 2018. How’s that for development?

An argument could also be made for Modric. This was his second season at Los Blancos, and he’d been heralded as the worst signing of the previous season in Spain. Four years later, he won the Ballon d’Or. That’s what you call a recovery. Real Madrid were always lagging behind ​Atletico and Barcelona in the league for the remainder of the season, and despite finishing three points from top, they never looked like winning it. Instead they got one over on their city rivals by beating them 4-1 in the Champions League final, courtesy of a last minute Sergio Ramos equaliser in normal time and another Bale masterclass in extra time.

They built on the core of youngsters in the squad and won four of the next five Champions League crowns having not winning a single one since the 2001/02 edition.

Barcelona, meanwhile, had crashed out of the European Cup in the quarter-finals to Atletico, before losing the title while playing them on the final day of the season at Camp Nou. Ironically, their lack of reliable a goalscorer without Messi or Sanchez was compounded by the vital role David Villa had in Atletico’s historic win, having left Barça the previous summer.

They responded just fine though - they signed Luis Suarez in the next window and won the treble. Every cloud…