9 Games Liverpool Fans Should Rewatch While Football Takes a Break

As football takes a break from its typically ferocious and unforgiving lifestyle, it's a time for fans to reflect and re-live their clubs' most exciting and joyful times. Football might not actually be more important than life and death, but we really do miss it.

Liverpool supporters have been fortunate enough to witness some of the best moments in world football. Those European nights under the Anfield lights, unthinkable comebacks in cup finals, Merseyside derby thrashings and dominating the European elite.

Here's nine of the best Liverpool games in modern times for all you Reds to enjoy while you're at home carefully following Government guidelines. Surely you didn't think this was going to start anywhere else? It really shouldn't have happened, many are still convinced it didn't. Paolo Maldini v Luis Garcia, Hernan Crespo v Steve Finnan, Andrea Pirlo v Harry Kewell. A first-minute Maldini volley and a Crespo brace just before the half-time whistle, 3-0 down to that team in a Champions League final, it was dead and buried already.

It's almost as if Liverpool transported to an alternate timeline in that dressing room. A Steven Gerrard header in the 54th minute and it was on. Six minutes, a Vladimir Smicer and a Xabi Alonso goal later and the Reds were level. Immortals can't be destroyed.

Jerzy Dudek pulled off the most incredible double, close-range, reaction save with three minutes left of extra time and it was then Liverpool knew this was theirs, their fifth European Cup, theirs to keep.

An Andriy Shevchenko penalty saved by the big left hand of Dudek decided what is the best European Cup final of all time. The opening line of the ​Liverpool Echo's match report was "When you get homesick, nothing will stop you returning to the arms of those you love." Football is brilliant. An ardent Anfield crowd was at its unrivalled best in one of the most memorable European nights as Liverpool eased past Real Madrid in the last 16.

A Gerrard penalty sent Liverpool 2-0 up before half time and truth be told, Madrid were being utterly ripped apart. Gerrard netted another in front of the Kop just after the break to seal the result, and the icing was put on cake for the Reds when unlikely scorer Andrea Dossena finished off a flowing move.

This performance reverberated around Europe and sent warning signs that Liverpool will be, once again, force to be reckoned with. Just four days after Liverpool knocked four past Real Madrid, they turned up to Old Trafford with a deserved chip on their shoulder and embarrassed Manchester United with four goals. Maybe four is the magic number?

Cristiano Ronaldo put away a penalty halfway through the first half and it looked like business as usual for Ferguson's Red Devils. But of course, Torres was Nemanja Vidic's kryptonite so Liverpool had other ideas when Vidic face-planted the grass and El Nino slammed the ball past Edwin van der Saar. Gerrard got his third against United that season and celebrated with the renowned kissing-the-camera celebration.

The inevitable Vidic red card (his second against Liverpool that season) came in last 15 minutes, and a Fabio Aurelio free kick top bins followed. In what was probably Dossena's best week of his life, he lifted the ball over the keeper like a natural finisher and made it 4-1. Liverpool just love doing things the hard way, and the FA Cup final in 2006 was no different. The Gerrard Final. When the 125th final of the world's oldest football knockout competition gets named after the winning captain, it must have been some game.

28 minutes on the clock and the Reds were 2-0 down, was history repeating itself? Time for another comeback. A Dijbril Cisse first time finish - 2-1. The high-tempo rollercoaster continued into the second half and Gerrard burst the roof of the net with a superb finish - 2-2.

12 minutes later and Liverpool did a Liverpool and Paul Konchesky floated a cross straight into the back of the net - 3-2. Step up Steven Gerrard. 30 yards out and only actually shooting because of the crippling cramp in his legs. You know what happened – it flew into the bottom corner and the Liverpool end erupted. The Reds would go on to win 3-1 on penalties and secure their seventh FA Cup. Football fans spend a lot of time bemoaning the art of a short corner, and quite rightly too. Every once in a while though, things that don't work? They just...work.

No coincidence it'ss another famous European Anfield night, 3-0 down from the semi-final first leg and with it all to do. Divock Origi started the unlikely revival in the first half, and substitute Georgino Wijnaldum rattled Barcelona with two goals in 122 seconds to out the tie right back in the balance.

Then – of course – a shell-shocked Barça side were caught off guard by Trent Alexander-Arnold's short corner, which Origi calmly slotted home in front of the Kop.

The first time since 1986 that a team have recovered a three-goal first-leg deficit to win a semi-final in the competition. Wow. New Liverpool manager Jurgen Klopp gave Liverpool fans a preview of what was to become the norm when they cruised to victory at the Etihad Stadium, stopping Manchester City from returning to the top of the table on the way.

Klopp's side danced and dazzled their way through the City defence with an incredible first half, as an It was the treble-winning (UEFA Cup, League Cup, FA Cup) year for Liverpool and everything Gerard Houllier touched seemed to go right. Emile Heskey opened the scoring after the usual nervous start, but the ever-so-boisterous Duncan Ferguson crashed home before half time. German defender Markus Babbel nudged Liverpool back in front but after God (in his earthly guise as Robbie Fowler) smashed the post from a penalty, the Ev went up the other end and scored from a penalty of their own. The most exciting game of football in Premier League history. This is why we live and breathe football.

The game was end-to-end from the start, Fowler heading Liverpool ahead in just the second minute. Shortly after, Les Ferdinand and David Ginola swung the game in the Magpies' favour only for Fowler to get his second 10 minutes into the second half.

Tino Asprilla fired home only two minutes later to level the score via a sublime assist from Rob Lee, but that piece of brilliance was cancelled out by Stan Collymore with time left to play.

Into the added time, and Martin Tyler's description of "Collymore closing in" was followed by the Kop almost literally shaking from its foundations. Kevin Keegan slumped over the advertising hoardings was certainly a picture. 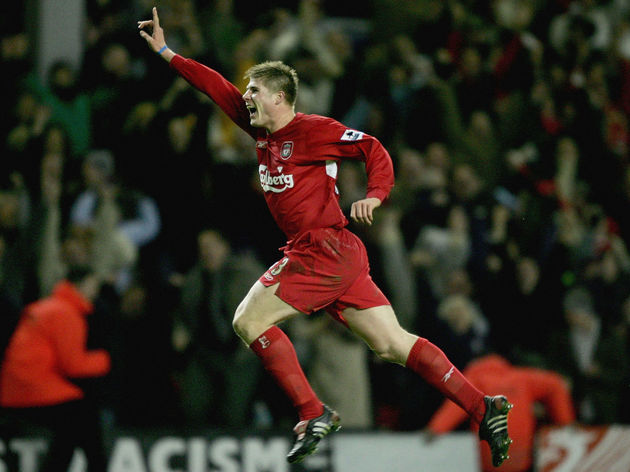 1-1 at Anfield against the previous season's Invincibles, 92 minutes on the clock, 30 yards out in front of the Kop and the ball dropped ever so kindly for Neil Mellor.

The 22-year-old academy graduate leathered the ball so hard that time appeared to stop. It flew just outside the reach of Jens Lehmann and into the net. Remember as a kid, when you used to smash a fly-away as hard as you could and it swerved and dipped like a fighter jet? Well that, except at Anfield, in the Premier League.