9 Games Barcelona Fans Should Rewatch While Football Takes a Break

​When selecting nine classic matches for Barcelona fans to enjoy, flicking back through timeless moments and beautiful football, you come to a realisation.

Barcelona fans have it so sickeningly good.

Not just that they've got it good now, they've always had it good. The best players. The best teams. The best style of football. Everything. Success? The club has won 74 trophies domestically and 20 internationally. What about players? Oh, just the three iterations of the best footballer in the world contemporaneously in Lionel Messi, Ronaldinho and Johan Cruyff.

Football fandom is supposed to be about the ups and the downs, but what if it doesn't have to be that way?

If you come to a realisation at the end of this article that following Crystal Palace home and away is too tiring and taxing on the soul, Barcelona is right there. We won't judge.

Even the thrilling build-up to this match couldn't match the masterclass of football that played out at Camp Nou.

José Mourinho, fresh from his treble-winning glory with Inter, was enjoying the greatest start of any coach in Real Madrid's history. It was the first heavyweight clash between Mourinho and Pep Guardiola. To boot, Los Blancos were unbeaten going into the game.

What followed was jaw-dropping. Imperious attacking football from the hosts with slick interplay matched by relentless pressing and the desire to win the ball back tirelessly. Real were second best in every aspect of the game and had no answer.
​

David Villa netted twice as Xavi, Pedro and Jeffren - of

With hopes of attaining the club's first ​European Cup, Cruyff's ​Barcelona went to Wembley Stadium as favourites in the final.

The club had reached this point twice before but had never tasted glory, losing to Benfica in 1961 and Steaua Bucharest in 1986. On this day, they faced Sampdoria and the elite striking duo of Roberto Mancini and Gianluca Vialli.

In an even and hotly contested match, the game was looking to be heading towards penalties. However,

The chemistry and alchemy of this 2011 side was really a sight to behold. The passing midfield interplay of Andrés Iniesta, Xavi and Sergio Busquets was mesmerising. The wing play and goalscoring tandem of David Villa and ​Pedro cannot be overlooked either.

And ​Messi, the artist, doing things that were not considered possible. However, these incredible moments would become more regular and soon they were expected from the Argentinian.

​You know a game is special when it has its own name; La Remontada still haunts Paris Saint-Germain.

From the management to the fans, the game left irrevocable scars on the club - a contributing factor to the excessive celebrations of PSG's players after the Champions League success over ​Borussia Dortmund last month.

Back to 2017, and PSG had already lost twice to Barcelona in recent memory in the knockout phase of the competition. However, after a 4-0 first-leg victory, the Parisians looked set to reach the quarter finals.

PSG looked so odds on to qualify that at 3-1 in the second leg Barcelona still needed three goals and had two minutes of normal time to get them.

Barely believable scenes would follow, events that wouldn't happen in a FIFA game, and a Sergi Roberto 95th-minute strike took Barça through. Did you know that ​Barcelona are actually known for comebacks? The Catalan club seem to have a copyright on everything good in football, making them either the greatest club or the most villainous. You decide.

Long before La Remontada, in 1986, Barcelona rose from the dead in a European competition. Having gone down 3-0 in the first leg of the semi-final, Barça headed back to Camp Nou needing a miracle.

Miracle achieved as Pichi Alonso bagged a hat-trick as the home side took the tie to penalties. The game, already having provided so much drama, took it to new heights. Göteburg's

In Guardiola's best seasons at Barça, Pep always seemed to have iconic wins over their great nemesis. To do so by ripping them apart at the Bernabéu adds another layer of satisfaction.

Led by ex-Spurs boss Juande Ramos, perhaps Real were doomed before they'd even begun. Los Blancos had no answer to Messi and Thierry Henry, who had his best game ever in a Barça shirt.

It was the game that Messi established himself in the false nine role as Xavi explained in an interview. He said:

Amazingly, Real took the lead with Gonzalo Higuaín heading in, but it would be a game with little to cheer for the home fans. Enemy number one, ​Gerard Piqué, would put the final stamp on a miserable day for Los Merengues.

The goal has been voted the third best in Barcelona's history  pic.twitter.com/ruyUezQsPe

The third and final game from the magical 2010/11 ​season is more misery for Real Madrid fans.

The ​Champions League semi-final pitted the two La Liga heavyweights against each other and Madrid were keen to enact revenge following their earlier season embarrassment they suffered.

Bad-tempered is polite, assault is extreme, so the actions of Mourinho's men were somewhere in between. One thing that Los Blancos would not allow was the 5-0 humiliating defeat of November to be replicated.

However, kick Messi as much as you want, he'll still make you pay. The Argentinian scored one of the greatest solo goals ever in a brilliant away win, sealing their place in the final before the second leg had even taken place.

Barcelona needed three points to secure Champions League football for the 2001/02 season, the score was 2-2 and Rivaldo had already scored two...

He then did this in the 89th to complete his hat-trick and secure a 3-2 win 勞 pic.twitter.com/DMIDk99dAJ

Valencia came to the Camp Nou needing only a draw to ensure their qualification for Champions League football for the following season.

​Barcelona were the only team that could catch Los Che and destiny conspired to pit them against each other in the last game of the season in a winner-takes-all battle royale.

In the third minute, Rivaldo took aim from all of thirty yards to give Barça a crucial lead. However, this Valencia side wouldn't accept their fate easily and Rúben Baraja levelled from a corner halfway through the first half.

In his own game of 'who can score the best goal', Rivaldo outdid himself on the stroke of half-time. Again from thirty yards, the Brazilian picked up the ball and dropped a Cruyff dummy that was so good that Valencia's Angulo is still unsure where the Rivaldo went, before unleashing a vicious swerving cannon. Barcelona led going into the second half. 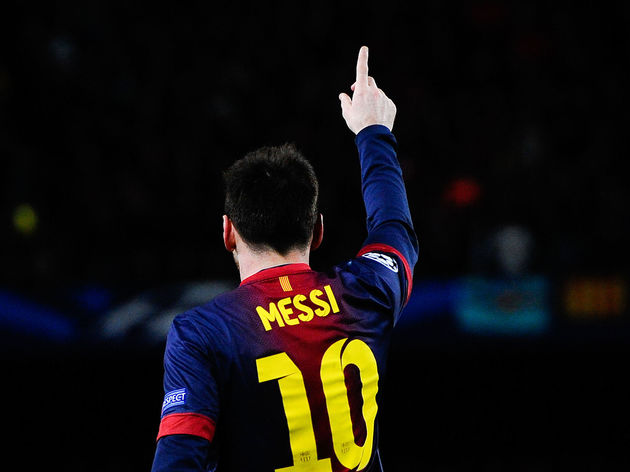 Their third comeback on our list, it seems as though Barcelona like to make it difficult for themselves. It must be a mantra at the club to disappoint in the first leg and then play out ​an astonishing second leg.

They had woefully underperformed at San Siro, with many wondering if this Barça team was on its last legs. 2-0 down and the normal verve of this side was lacking; disorganisation had taken over.

However, Messi made light work of the Italians at the Camp Nou, striking twice in the first half. David Villa and Jordi Alba would put the exclamation mark on the performance as the Catalan club dusted Milan.