​If you asked Tottenham and Chelsea fans to cast their minds back to games between the two clubs in 2008, they would probably immediately think of the Carling Cup final at Wembley in February.

For Spurs, it is a date to be remembered fondly as they eventually triumphed 2-1 to claim what remains their most recent piece of silverware. Yet less than a month later there was actually a far better game between the pair in the Premier League.

With Chelsea seeking revenge for their cup defeat, Didier Drogba put the visitors ahead inside three minutes, only for Tottenham's Wembley hero Jonathan Woodgate to level matters nine minutes later. Chelsea were aiming to keep their title challenge on track, and put themselves in a good position when goals from Michael Essien and Joe Cole either side of the break gave them a 3-1 advantage.

However, Spurs had developed a newfound steeliness under Juande Ramos and hit back through Dimitar Berbatov and Tom Huddlestone to make it 3-3 heading into the final 15 minutes.

It seemed that Chelsea would secure all three points when the in-form Joe Cole displayed quick feet and an exquisite finish to restore the lead for Avram Grant's side. That was not to be the end of the drama though, as Robbie Keane curled an unstoppable effort home from the edge of the area to rescue a point for the hosts.

Despite having a defence that contained England internationals in Woodgate and Ledley King, it was a concern for Tottenham

Spurs would go on to concede 61 goals in their 2007/08 campaign - the fifth-worst defensive record in the league. Being held to a draw was also a common feeling for the club throughout this season. They ended up with the joint-most stalemates in the league (13), including all four of their games in April.

A game that summed up their season in some ways, with bright moments being overshadowed by defensive lapses, leading to an underwhelming 11th placed finish. 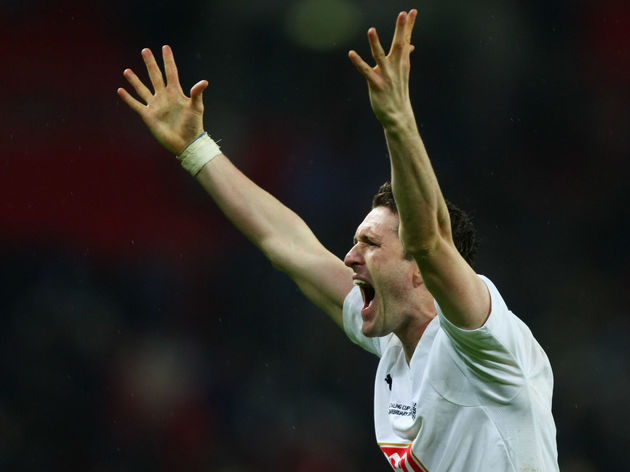 This was Keane's best season at the club in terms of goal contributions, as he scored 15 goals and provided seven assists in 36 league games. It should really be no surprise that he was to have the final say on this special evening.

The ball did drop invitingly for the Irishman on the edge of the area, but with just two minutes remaining and his side staring down the barrel of defeat it was far from an easy task to find the corner of the net.

Keane rose to the occasion though, with his perfect finish leaving Carlo Cudicini with no chance, and cuing that all too familiar celebration.​

If a case could be made for this match summing up Tottenham's campaign, then the same could certainly be said for Chelsea as well. So near, yet so far.

Avram Grant's men led for much of the contest, just as they had done in the previous month's cup final. They did not get across the line then either, and they were to go on and suffer further disappointment later on in the season. The club missed out on the Premier League

In another season this could have been a memorable season for the Blues. Instead they were left trophy-less and Avram Grant's head would roll. There was plenty of attacking excellence on show at White Hart Lane on this Wednesday night, but no one shone brighter than Joe Cole.

The England winger entered the game in outstanding form having scored in wins over West Ham and Derby earlier in the month, ​and he was somewhere near his best once again here.

Having set up Michael Essien's first half goal, Cole took centre stage after the interval. With Pascal Chimbonda playing as a makeshift left-back, Cole took full advantage, easing past his man twice before producing composed finishes on both occasions.

He deserved to be on the winning side. With Tottenham conceding goals for fun here and for much of the season, it was no surprise that there were some defensive casualties. Paul Robinson moved to Blackburn in the summer, while the hapless Chimbonda spent the first half of the next season at Sunderland before also moving to Ewood Park in 2009.

Chelsea's final substitute on the night was Andriy Shevchenko and it was to be one of his final appearances for the club. Following an underwhelming two years in the capital, the Ukrainian forward returned to Milan in August 2008.​ Drogba had turned 30 just days before this game, so there may have been some wondering if his best days were behind him.

The Ivorian striker would go on to firmly establish himself as a Chelsea legend, netting the winning goals in FA Cup final wins in 2010 and 2012 before slotting home the decisive penalty in the club's European triumph in 2012 to sign off his first spell at the club. Remember Radek Cerny? If not then don't worry - you probably aren't alone. The Czech goalkeeper actually played 13 league games during this campaign as Paul Robinson suffered a dip in form. Cerny was only on the bench here though, and he was moved on to QPR in the summer.

Honourable mention to Didier Zokora and Steed Malbranque in the Spurs midfield too. Despite picking up a rare piece of silverware in February, Tottenham's year gradually got worse, and after failing to win any of their opening eight games in the 2008/09 season, Ramos was shown the door.

His replacement, Harry Redknapp, turned things around rapidly, guiding Spurs to Champions League qualification in 2009/10 followed by the quarter-finals of Europe's elite competition a year later.​ Meanwhile, there may have been fears that Chelsea

Carlo Ancelotti delivered a league and cup double in 2010, before the team claimed the ultimate prize of winning the Champions League in Munich in 2012.

How did a back four containing Ledley King concede four goals at home?

How did a defence marshalled by John Terry and Ricardo Carvalho ship four goals up the other end?

Was there really no one better to play at left back than Pascal Chimbonda?

We'll allow you to come up with the answers. One thing is for sure - it was a quite incredible game of football.