In the last few years we have seen a something of a changing of the guard at Stamford Bridge. The youngsters are finally getting a gig and things look to be changing within the club ethos.

But much of Chelsea's previous success over the last 15 years has been down to shrewd signings from overseas and a fantastic spine that took the Premier League, and eventually Europe, by storm. So, when putting an all time XI together for the club now, it's hard to look past many of the multiple title-winners of recent years.

But let's dig a little deeper, shall we? We have put together an XI with a difference, where a nationality can only be represented once. Yes it was hard, yes there are some glaring omissions. But we reckon it's still a dream of an eleven. Take a look and let us know what you think. ​Easy choice - Cech is simply the best the Blues have had. A record 202 ​Premier League clean sheets says it all.

Not to mention, we haven't had any Czech players anywhere near as good. We did have

Jiří Jarošík...the less that's said about that, the better. Bran Ivan. The colossal right-back wall. The Serbian skipper was ever-present for the title-winning seasons of 2009/10 and 2014/15. Only a cruel suspension robbed him of playing in the ​Champions League final victory too.

But boy he was solid, reliable, versatile and tough. Just the player you wanted in your dressing room if you were scrapping to hold onto trophies and beat the best teams. ​Carvalho is one of the most underrated defenders to have graced the Premier League. He was ever so reliable. Despite not being the biggest, he was quick, good with the ball and While David Luiz may have turned judas on two occasions in the eyes of some fans, with his departures to Paris Saint-Germain and Arsenal respectively, he is still the greatest Brazilian to ever don the blue shirt and played a huge part in a key period in the club's history.

Luiz won the historic Champions League title in 2012 as well as a Premier League trophy under Antonio Conte in 2017 after he returned to the club from France. He also secured two FA Cup and Europa League victories in his two spells in west London. Azpi is the definition of professional; never stops running, never gives up even when we are being hammered, he is resolute beyond belief. His record of 74 consecutive games in the Premier League is everything he's about.

Not the most technically gifted but certainly the most consistent Spaniard we've seen in Blue, and certainly one of the most loyal players to grace the Stamford Bridge turf. Played a lot on both flanks too, which makes his selection even easier. Anyone remember that Soccer AM segment entitled 'Big Tackle: Sponsored by Claude Makélélé' (Parisian accent and all)?

Before the days of N'Golo Kanté, this man was everything the Blues required in the centre of the park. He was an absolute machine and the reason that defensively, Chelsea were leaps and bounds ahead in their first two Premier League wins in 2005 and 2006 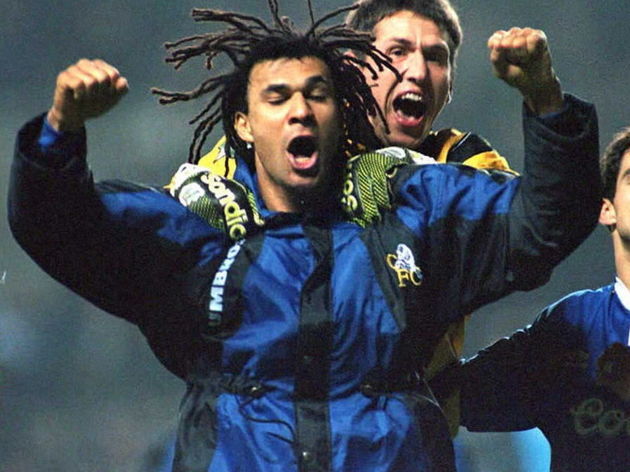 Just pipping Michael Ballack to the first centre midfield position is Ruud Gullit. This may seem a strange selection as he only played at the Bridge for three years, but he was just a phenomenal midfielder.

He was so versatile, with the ability to play anywhere from a sweeper to a second striker and he arguably revolutionised Chelsea's forward play under Glen Hoddle. His late runs into the box and exemplary distribution made him an instant legend in SW6. Of course, he also went on to manage the club which always helps too. Super Frank Lampard takes the English slot ahead of John Terry - just. The club's current manager won every single trophy that was available to him throughout his career at Stamford Bridge.

A brilliant player, it is remarkable that Lampard is the club's all-time top scorer with 211 strikes, despite being a ​If one player defines the beginning of Chelsea's rebirth as a Premier League contender, it was Zola. The Italian magician was electric. He had it all, creativity, flare and his dead balls were some of the best the league has seen.

His inch-perfect cross for Robbie Di Matteo in the FA Cup final of 2000 will forever be etched in Blues' fans minds. He is also a lovely bloke which doesn't do him any harm. The Belgian wizard. There are few players who have had such an effect on a team as Eden Hazard did when he joined the Blues in 2012.

Hazard had every trick in the book and an incredible turn of pace. He would often save the team's blushes in games that they should have won comfortably. Seeing Chelsea struggle up top since his departure shows what a huge player he was for so many years. Saved my favourite to last. Drogba was the player you absolutely wanted on your team and not the oppositions.  A team man, selfless, happy to sacrifice personal milestones for the sake of the bigger picture.

Drogba had two spells with the Blues and famously kicked the winning penalty on the biggest night in the club's history. A beast on the pitch but a fantastic humanitarian off it.