It’s been another impressive season for the Korean forward, who has racked up 16 goals in 32 appearances, most recently netting a last-minute winner against Aston Villa before a fractured arm ruled him out of further Premier League action.

Son’s form has clearly caught Van Dijk's eye, with the towering centre-back including the winger alongside four other current stars of the English top-flight in an interview with Premier League Productions.

50 - With his 8th league goal of the season, Son Heung-min has become the first Asian player to reach 50 Premier League goals. Representation. pic.twitter.com/XF4EHv4Mq6

With the key condition being that the Netherlands international was not allowed to pick any of his Liverpool teammates, he opted to start Son as one of two midfielders.

“He’s [Son] quick, he’s strong, he goes out there to make life hell on the pitch for a defender,” explained Van Dijk.

And his finishing – right foot, left foot – is just outstanding.” 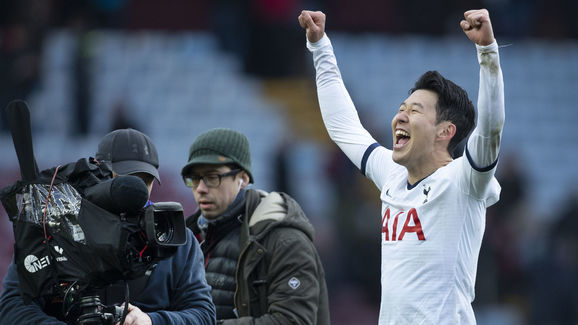 Kevin de Bruyne was one of three players from Liverpool’s title rivals Manchester City to make the cut, starting alongside Son in the middle of the park.

“[Y]ou don't need to say too much about him,” said Van Dijk of the Belgian.

"I think Kevin is a good guy first of all but he’s an outstanding player.”

De Bruyne’s teammates Aymeric Laporte and Ederson were also included, and despite the goalkeeper’s difficult season Van Dijk was eager to praise him.

“I think he [Ederson] is an outstanding goalkeeper,” Van Dijk weighed in.

"This season there have been more better goalkeepers than we have seen maybe in the past, but I think Ederson is the best of the rest - I think [Liverpool goalkeeper] Alisson is still number one, that’s my feeling.”

Finally, Van Dijk had to pick a striker, and he snubbed the likes of Sergio Aguero, Harry Kane and Jamie Vardy in favour of Arsenal’s Pierre-Emerick Aubameyang, who has scored 17 league goals for the Gunners this season.