Whether you like it or not, shirt numbers matter.

No one really knows why, and we aren't about to explain it to you. They just do - and at Borussia Dortmund that is no different.

The club has been home to some legends of the game, so, let's take a trip down memory lane, as we look at the best players to wear the decorated yellow shirt numbers one to 11 over the years for BVB.

Due to the wide array of other numbers available to the best players these days, there are some notable absentees from one to 11. We wish we could include the number 17 in this list as all the owners of that particular jersey have basically all been gems; Dede, Pierre-Emerick Aubameyang, Erling Braut Haaland...I could go on, but it might be a blessing that we don't have to make a call on that one.

Nevertheless, let's see who made the cut in this unusual XI.

If longevity and loyalty alone defined the quality of a goalkeeper, this guy would be right up there. Weidenfeller joined BVB in 2003 to replace Arsenal-bound Jens Lehmann. He went on to play in just shy of 350 games for the club across a mammoth 16 seasons.

Although he did lose his place to Roman B 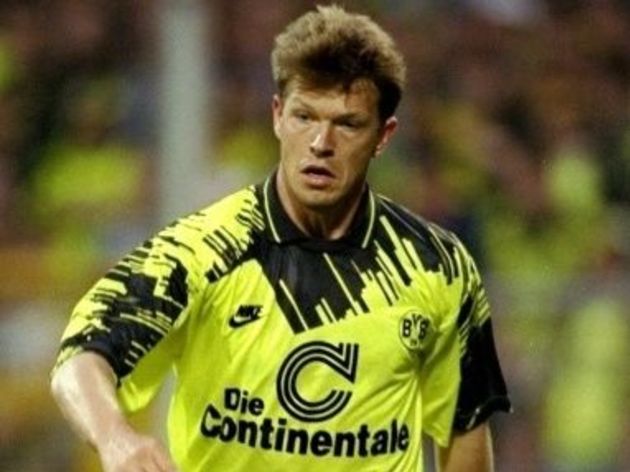 ​This was one of the tougher ones. Not too many legends of the club have donned the number two shirt, but out of all the contenders who wore it for a number of seasons, Reinhardt has quite simply won the most.

The combative midfielder (I know, should never be wearing no.2) was ever-present in Dortmund's back-to-back title wins between1994 and96 as they totally dominated in successive seasons.

The biggest error he ever made was leaving the Westfalenstadion, as he was relegated with his new club FC N Right-sided defender Evanilson signed in 1999 and went on to have four magnificent seasons with Die Borussen including a dynamic wingback partnership alongside fellow Brazilian, Dede.

Under Matthias Sammer, Evanilson helped regain the league title in 2002 and finish runners up in the UEFA Cup in the same year. Internationally, he was an able deputy to the legendary Cafu as Brazil won the Copa America in 1999.

Sadly, a series of serious injuries put an abrupt end to Evanilson's club career and after leaving the club in 2005, he never regained his best form. Joining from FSV Mainz 05 in 2008, his commanding displays landed him in the team of the season (first half of 2008/09) alongside the likes of Philip Lahm and Lucio. The following year, he was one of only four players to play every minute of every Bundesliga game that season.

After several seasons of success, he was gradually phased out of the team and left on loan to FC Koln in 2017, but made a return to the squad under new manager Peter Bosz. That proved to be his swan song and he now plies his trade for recently promoted side Union Berlin. The first of two club legends coming up. Kohler is one of the most successful German defenders of all time. After joining in 1995 from Juventus (where he had just won the league and cup double), he went on to play a huge part in Dortmund's league title win in 1996 and their Champions League victory the following year.

He was widely considered to be the complete centre-back, with his ability to play out from the back with calmness and clarity as well as having a sharp eye for goal from set pieces.

He was named German Footballer of the Year in 1997 and represented his country more than 100 times, winning both the World Cup in 1990 and Euro 1996. After retirement, he went on to manage Germany's Under-21 side. ​If Kohler was a legend, Sammer certainly wasn't far off. Signed from Inter in 1993, German international Sammer went on to make more than 100 appearances for the club in five seasons. During that time he moved positions from a midfielder to a libero (sweeper) under coach Ottmar Hitzfeld, which revolutionised his game and the teams successes.

He went on to help the team to successive league titles and then lifted the 1997 Champions League trophy as captain on a historic night in Munich, where they beat Juventus 3-1.

His career was cut short by injury in 1998 but he went on to manage Dortmund to a league title in 2002. He then took over as director of football at Bayern Munich Stefan Reuter played more than 300 games for the club and was a mainstay during the incredibly successful period of the late 1990s to early 2000s, so he comfortably takes the seven shirt off recent starlets like Ousmane Demb

Having previously won league titles with Bayern and a World Cup with his country, German Reuter was the ideal addition to a squad building for greatness. The midfielder who could also play in defence, was instrumental in three Bundesliga

Known as 'Turbo' due to his extreme pace on the pitch, Reuter was ahead of his time as defensive midfielders go, with the ability to play from box to box and assist at both ends of the pitch. He retired in 2004 and is now general manager at FC Augsburg. Mr. Dortmund. Michael Zorc spent his entire career at the Westfalenstadion. He played a staggering 600 competitive matches for the club over 17 seasons. He was also club captain for 11 years.

Known as 'Susi' for his long hair that defined his early years, he was a master from the penalty spot, scoring 53 and missing just nine in his entire club career. He is the club's third highest goal scorer largely as a result his penno ability, and was known for his aggressive, no nonsense attitude in midfield.

Since retiring in 1998, he has moved on to serve as sporting director of his lifelong club and has overseen the development of several outstanding teams and the signings of some of the worlds best young talent, including the likes of Aubameyang, Christian Pulisic and of course Sancho. No one has had more impact on and off the pitch combined for the club than Zorc, and he rightly takes his place in the eight shirt. 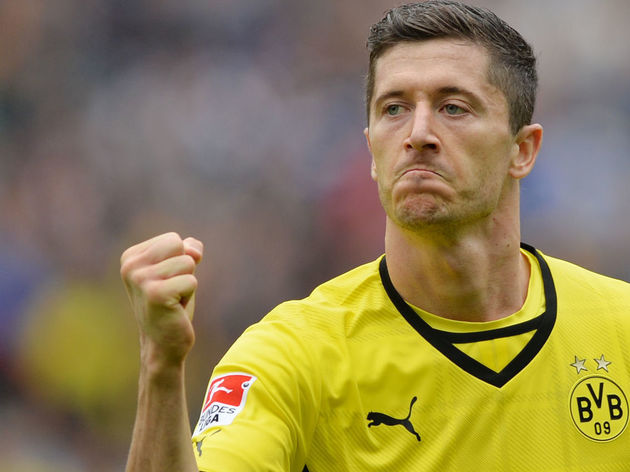 ​Is there a better finisher in world football? Hard to argue against the Polish superstar's record both for current club Bayern Munich and of course BVB, where he made his mark on the football world initially.

Of course we all know what he has gone onto achieve, but in case you'd forgotten; seven Bundesliga's, three German cups and more than 100 appearances and 60 goals for his country. He is arguably one of the greatest complete strikers of all time and he's not finished yet. 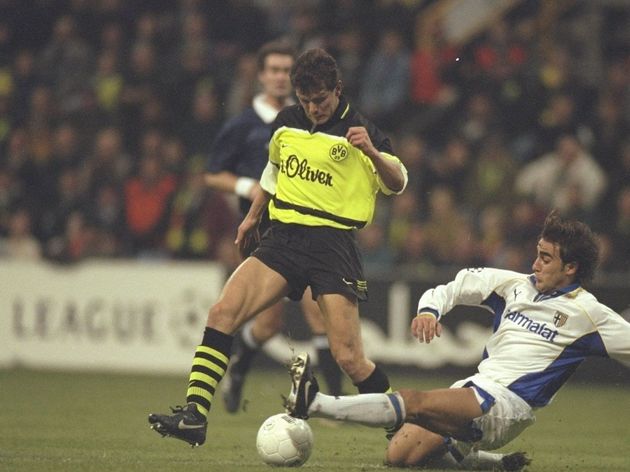 Once described as 'one of the best midfielders of his generation' by ESPN, German international M

His greatest period for BVB came with the aforementioned title-winning team of the mid-nineties. He assisted two of the goals in the win over Juventus in the Champions League final of 1997. ​Lastly, Marco Reus is undoubtedly the no.11. The German superstar rejoined his boyhood club in 2011 and has scored more than 130 goals for the club across all competitions.

Often prone to injury but always full of quality, the attacking playmaker can play in a variety of positions up the pitch and has been vital in Dortmund's return to the summit of the Bundesliga reckoning in the past six to seven seasons.

Handed the captain's armband in 2018, Reus