There was a time where things looked bleak for Bayern fans: Niko Kovac was at the helm, the squad was divided, the football was uninspiring and newly emerging sides looked to be taking over.

But interim boss Hansi Flick – who's now signed a permanent contract at the club until 2023 – has helped restore order in Germany since he took over in mid-November, not only encouraging a free-flowing, dynamic style of play but re-establishing Bayern as arguably the finest club side on the planet before Covid-19 got involved.

Despite their dominance since Flick's arrival, this is still a side in transition and heading into a new era following the departure of the 'Robbery' duet. And while their current squad is one packed with electricity, technique, ruthlessness and Raumdeuters, you still feel that Die Roten are maybe one or two players light from becoming the complete outfit.

So, these are four key positions Bayern need to strengthen ahead of next season, complete with expected and/or possible targets for each… 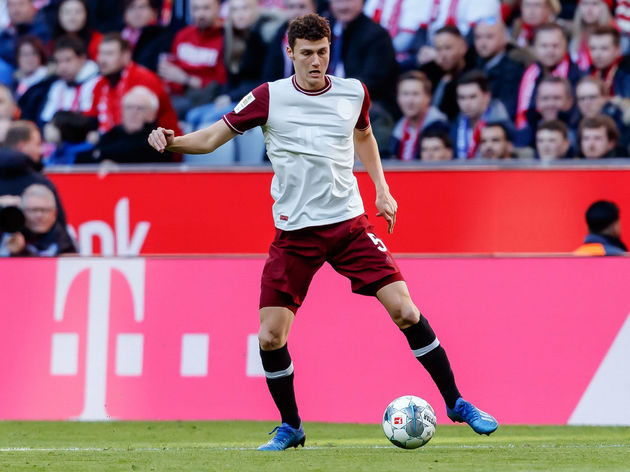 Despite adding £31m Benjamin Pavard to their ranks from Stuttgart last summer, the Bayern hierarchy should be concerned at the lack of depth at the right-back position.

The Frenchman is a fine defender, but also the weak link in the Die Roten side, and the German superpower will only have Joshua Kimmich – who's also a world-class defensive midfielder – as a backup option once Alvaro Odriozola's loan spell comes draws to a close at the end of the season.

The addition of another right-back would also allow Pavard to shift over to a right centre-back position – a role he starred in during his Stuttgart days.

Joao Cancelo's situation at Manchester City is one Bayern may want to monitor, but the Portugal international could be poised for a breakthrough campaign at the Etihad next time around following a patchy acclimatising period in year one. Overall, a sale seems unlikely.

In terms of more realistic options who'd serve as a backup to Pavard; the versatile Benjamin Henrichs is somebody who they've reportedly taken a look at in the past, while 19-year-old Tomas Tavares has enjoyed an impressive campaign for Benfica this season.

Another option would be making Odriozola's loan deal a permanent one, although the Spaniard hasn't exactly had the most fruitful of times in Munich. With the future of David Alaba up in the air, Jerome Boateng not getting any younger and Niklas Sule coming into next season off the back of a long-term knee injury, centre-back has to be a priority for the Die Roten hierarchy.

The ball-playing Lucas Hernandez is set in stone to be Bayern's left-sided centre-half for the next decade, while German international Sule has also proven to be one of Europe's finest when fit. Javi Martinez is also capable of playing a backup role.

So, with two world-class defenders already in their ranks, Bayern could: a) be aggressive and add another elite talent, or b) sign a promising youngster to play second fiddle and nurture.

If they go for option A, Bayern shouldn't look any further than Napoli's Kalidou Koulibaly – who is destined to leave Naples at the next opportunity.

A right-sided centre-back should be the priority, though, and in that case, Inter's Milan Skriniar might be the best option. A move for the Slovak seems unlikely, mind.

The mightily talented Dayot Upamecano is a player who was mildly linked with the club in February and falls in between the two above options.

Players to look at for option B would be Hertha's Niklas Stark - a towering defender who's more than comfortable in possession - and Athletic Club's Unai Nunez.

24-year-old Ramy Bensabaini is another intriguing option due to his versatility. Like Hernandez, the Algerian international can also play left-back to a very high standard and he's shone under Marco Rose this term. Flick has generally favoured the 4-2-3-1 since his appointment, with a combination of Thomas Muller, Leon Goretzka and Philippe Coutinho generally occupying the 'number 10' role behind the striker.

But with the reinvigorated Muller now 30 and Goretzka only showing mere flashes of his supreme talent, this is an area Bayern will undoubtedly target in the next window.

The fluid, interchanging nature of Bayern

Despite the hefty fee Bayern Leverkusen are demanding, Bayern just have to make a play for the generational Kai Havertz. His signing would be a game-changer.

With Havertz the overwhelming priority, it's pretty tough to find other players they could make a move for. Donny van de Beek, however, would be the ideal rebound if they fail to land the 20-year-old, while Freiburg's Luca Waldschmidt has the potential to become a fine 'shadow striker' despite generally being deployed as a centre-forward at Freiburg.

If worst comes to worst, Bayern could explore the possibility of turning Coutinho's loan into a permanent switch. On the other hand...that just won't happen. Amid his remarkable goalscoring form this season, it's easy to forget that Robert Lewandowski is the wrong side of 30.

Bayern need their heir to Lewandowski's throne, and it's expected they'll try to find him whenever the next opportunity arises.

Not only do they need a prolific, efficient finisher, but a forward who's able to combine effectively with those around him. The 31-year-old is a pivotal part of Flick's buildup play and has proved to be a mightily effective forward while playing with his back to goal.

An intelligent number nine, who's always able to anticipate his teammates' next move and create space for themselves as the lone forward is sort of profile Die Roten should be targeting.

German news outlet Sport1 recently reported that deal for Leipzig's Timo Werner isn't off the table, although Bayern are expected to face fierce competition from Liverpool for the German's signature.

Luka Jovic probably wouldn't mind a return to the Bundesliga