​Brighton may be in and amongst a relegation scrap in the Premier League, but they have undoubtedly been revolutionised under their newly recruited manager Graham Potter.

Neal #Maupay has revolutionised the way in which #BHAFC score goals.

If you've read any of my other pieces this season you'll likely be thinking, 'oh, here we go again, he's going to ramble on about possession football again.' But there's more to it than that.

Of course, it has been far more entertaining for Brighton supporters since Potter's arrival - registering the fifth most completed passes in the entire division is no mean feat - but the knock on effects of his tactical approach are mind-blowing.

The whole way in which ​Brighton attack opposition sides has changed, the types of goals they're scoring are completely different to that of last season, and they're displaying far better composure on the ball.

In 2018/19, veteran attacker Glenn Murray led the line for the Albion and you've got to admit it was a successful season for all parties involved. 13 goals in 38 appearances, he was the club's top scorer and arguably the man who kept them in the top flight. However, now at 36 years of age, 'Muzza' is approaching the end of his career and a new man is required to fill his place. 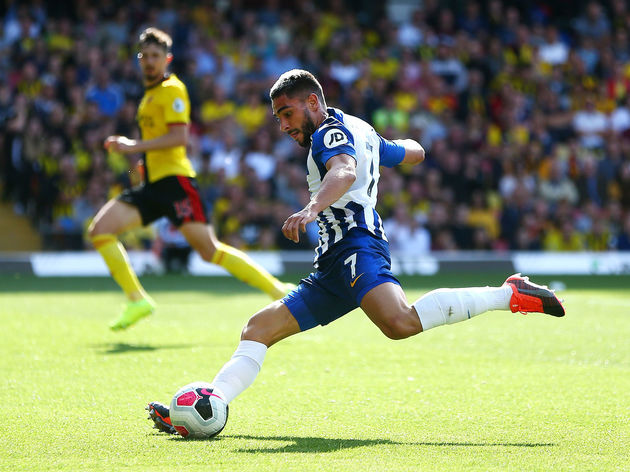 Signing from Brentford for around £20m, Maupay arrived on the scene in August after a terrific season in the Championship. 25 goals in 43 games was enough to convince technical director Dan Ashworth that the Frenchman was the man for the job and the Seagulls have not looked back since.

His impact was felt straight away as Brighton ran rampant at Vicarage Road on the opening day of the season, beating Watford 3-0 and sending away supporters into pandemonium. The goal he scored wasn't half-bad either. Maupay latched onto a through ball from Lewis Dunk before rounding Ben Foster and drilling home. A dream start.

One thing to note here is the type of goal in which he scored. Dribbling the ball around the goalkeeper - you'd have to look way, way back to find another example of a Brighton player doing that. It requires a lot of skill and nerve.

And that's not the only example of an audacious effort Maupay has attempted (and succeeded at) since signing for the club. Against ​Wolves at the AMEX, for example, Albion's number seven took aim from around 20 yards on his weaker left foot and left goalkeeper Rui Patricio helpless. That was some effort.

Typically predecessor Glenn Murray scored either with his right foot or head from open play, and quite often also converted from the spot. It was rare that you'd see anything else. That's fine, of course. A goal is a goal after all, but Maupay has stepped up and produced an array of different strikes, offering not only excitement for fans but also another dimension for the team.

Since signing in the summer, the 23-year-old has netted eight Premier League goals. Three have been with his left foot, two with his right, and three with his head. One was a penalty, one was a wonderful glancing header to win it at the death at the Emirates, and another was a screamer on the half volley to equalise against Wolves. You may think that losing Murray as a starter would be hard hitting, but the fact that Maupay can also act as a false nine or loose target man is a blessing for the Albion. Yes, you can't launch the ball forward to the Frenchman and expect him to win every aerial dual, but he is more than capable of holding up play before spraying the ball out to the flanks.

Quite often you'll see him do just that. He'll drop back a few yards into space, collect the ball, hold it up while moving forward gradually, then drill a forward pass to a winger. His agility and pace allow him to make runs toward the penalty area and cause danger. He has done so on numerous occasions, and that is ultimately why he is Brighton's top scorer in 2019/20.

And he'd have even more goals if it wasn't for the fact he hasn't been all too clinical this season. Unfortunately that is one element that lets his game down. At times he can be a little too eager to take a shot on and it does result in inaccuracy. But just as there is with a new system under a new manager, there's always going to be teething problems with a player coming into arguably the best league in the world without any prior experience within it.

The consequence is the Seagulls' league position - in 15th, just two points above the bottom three. But with a little more tuition, practice and confidence, it won't be long until you see Brighton taking on the big dogs, rather than rolling over and having their tummies ticked.